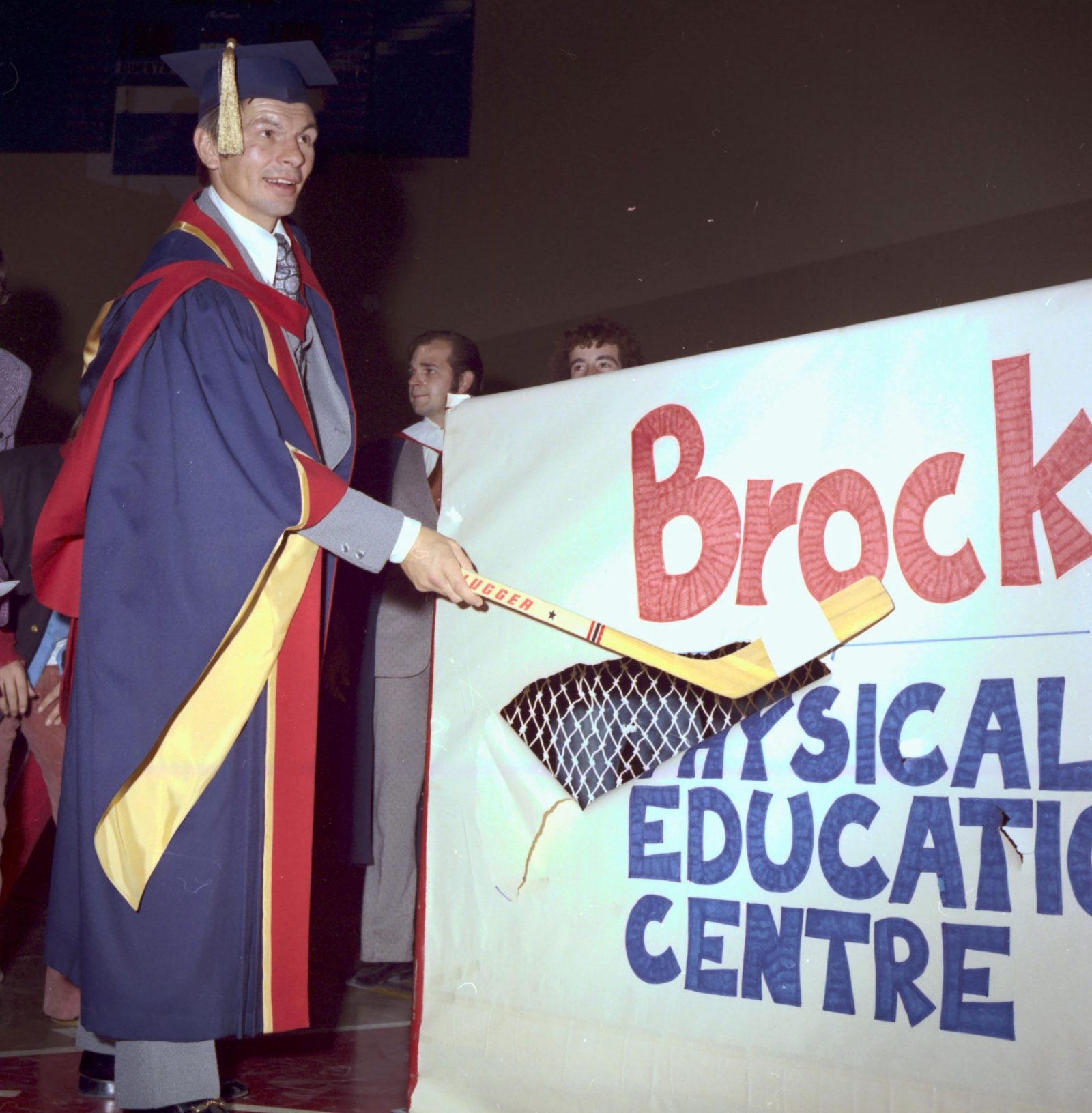 As memories and tributes of hockey legend Stan Mikita pour in, few likely know of his connection to Brock University.

Mikita, who died Tuesday at the age of 78, is believed to have been the first professional hockey player to receive a doctor of laws degree, which he received from Brock during its 12th Convocation on Oct. 15, 1973.

Well into his professional hockey career with the Chicago Blackhawks at the time, Mikita was 33 years old when University President Alan Earp and Chancellor Charles Sankey conferred on him an honorary doctorate. Immediately after the ceremony, Mikita helped open Brock’s new Physical Education Centre. The $3.9-million sports complex included what is now the Bob Davis Gymnasium, which Mikita officially opened by shooting a puck into a paper-covered net from centre court.

In a lighthearted Oct. 3, 1973 interview with the Toronto Star, Mikita was quoted as saying: “For the time being it’s OK to call me Stan Mikita, just like always, or even Stash. But after the 15th, I’ll be looking for a little more respect. From then on, I’d prefer Dr. Mikita, if you don’t mind.”

By that point in his career, Mikita had long established himself as a National Hockey League superstar. Born in the former Czechoslovakia, Mikita grew up in St. Catharines and was drafted by the Black Hawks at the age of 13. He played for the St. Catharines Teepees Junior A team for three years before making his NHL debut in 1958. He played in nearly 1,400 games, won a Stanley Cup in 1961 and played in nine All-Star Games. After retiring in 1980, his number was retired by the Blackhawks, and he was inducted in the Hockey Hall of Fame in 1983.

The City of St. Catharines embraced Mikita, and in 1972 the City hosted a Stan Mikita Day. He donated the proceeds from the day to Brock to establish a bursary, which still exists and is given each year to a Brock men’s hockey player.

Although Mikita wasn’t a Brock alumnus, it was reported at the time of the phys-ed complex opening that he felt a connection to the school and was passionate about getting more children involved in athletics. In a statement from the 1973 opening, Earp said a major focus of the new complex was to enhance Brock’s Physical Education Program which placed “major emphasis on physical education for elementary school age children.”