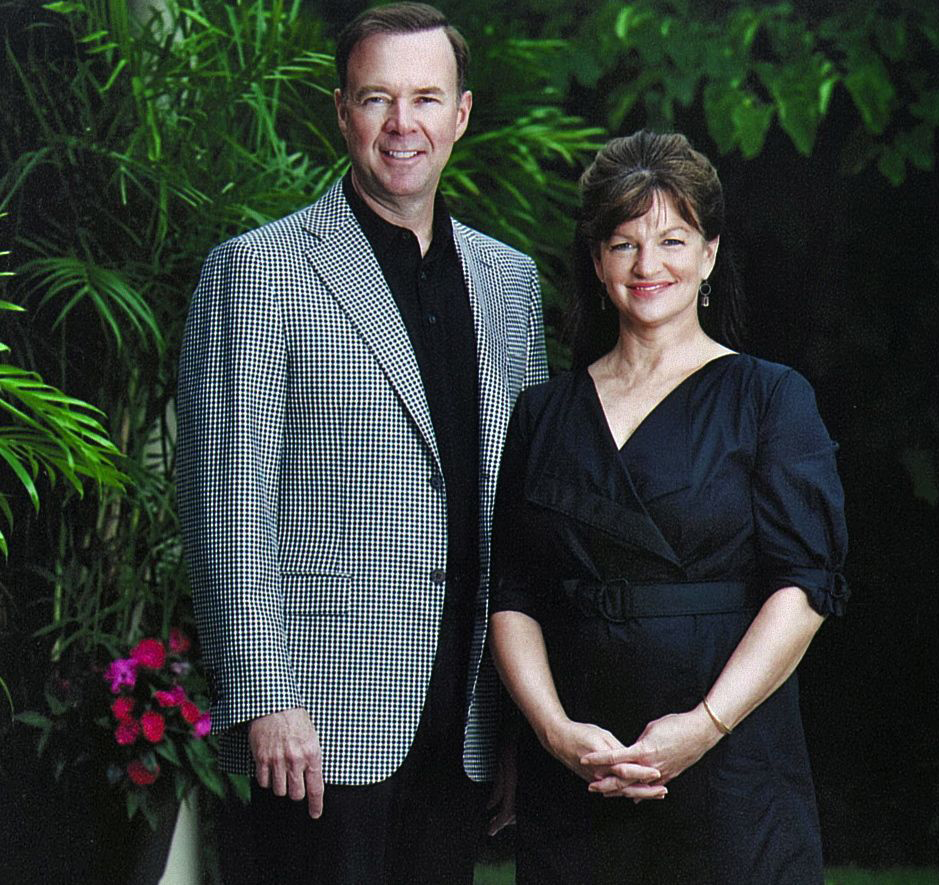 Former Brock University Board of Trustees Chair Joe Robertson is pictured with his wife Anita.

Brock University officials were saddened to learn of the death of former Board of Trustees Chair Joe Robertson, his wife Anita and their daughter Laura.

The Robertsons were the only occupants of a twin-engine private aircraft that crashed on approach to an airport in Greenville, Maine just before 11 a.m. Monday, July 30. Joe Robertson was the registered owner of the plane, which had taken off Monday morning from Pembroke, Ont., and was en route to Prince Edward Island. 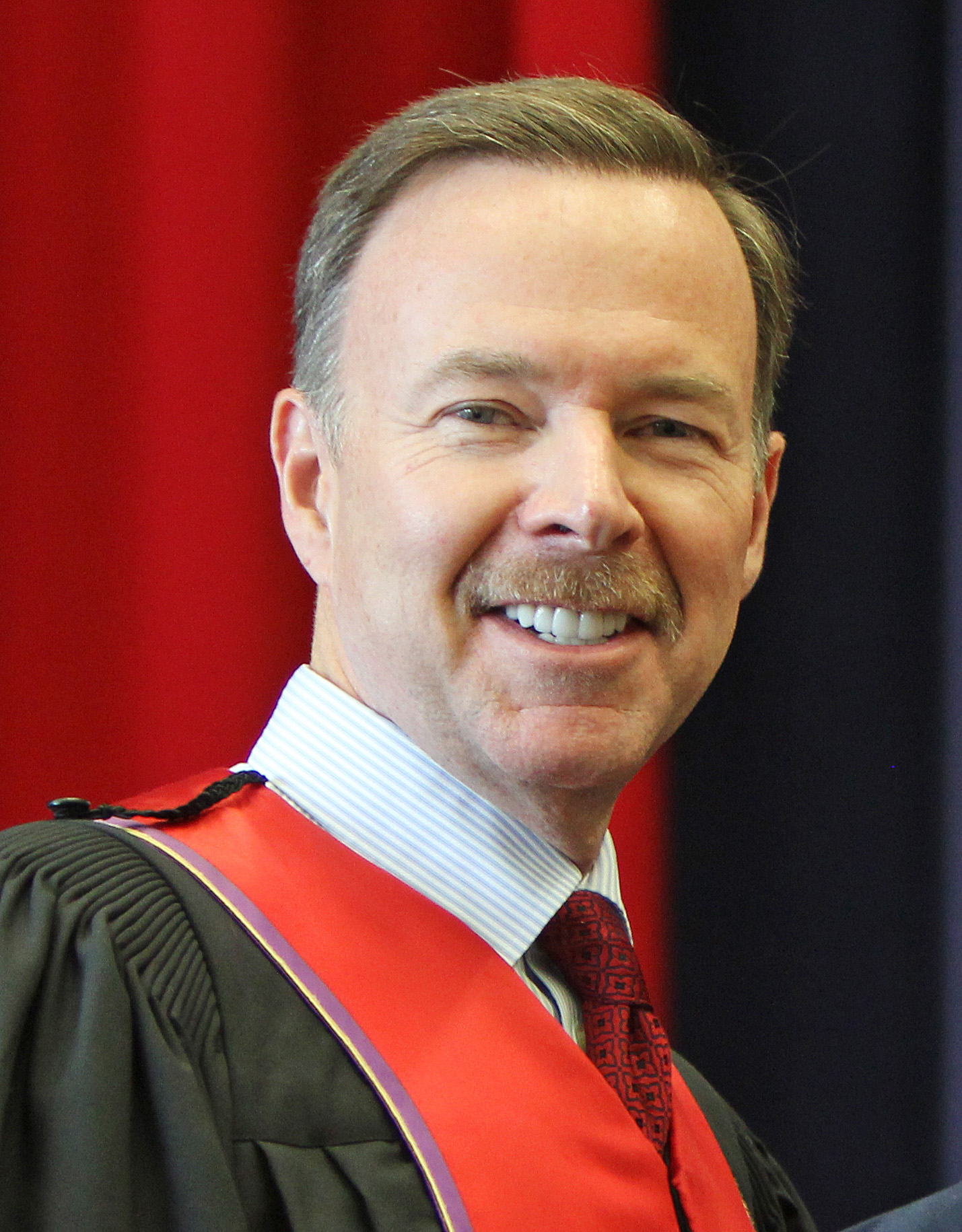 Former Board of Trustees Chair Joe Robertson is pictured during Brock’s 2015 Spring Convocation.

The Greenville Police Department confirmed Tuesday that the three victims of the crash were Joe and Anita Robertson and their 24-year-old daughter Laura, who had just days earlier been hired to work in the University’s athletics and recreation department.

“One cannot understate the enormous contribution Joe Robertson made to Brock University both as Chair of the Board and a passionate supporter of the University at every turn,” said Gary Comerford, Chair of Brock’s current Board of Trustees, which is responsible for the government, management and control of the University and its finances and infrastructure.

Robertson served on Brock’s Board for 10 years, completing his tenure with two years as Chair from 2012-14.

“During the years Joe served on the Board, the University made significant strides forward. He helped to lay the foundation for some of the future achievements of this University,” Comerford said.

Robertson was a proud Niagara-on-the-Lake resident who earned an MBA from Harvard before becoming a successful businessperson. In addition to serving on Brock’s Board, he also served as chair of the Council of Chairs of Ontario Universities, an organization of all the chairs, vice-chairs and immediate past chairs of Ontario’s 21 universities.

Robertson and his wife were also well known for their philanthropic work, donating to the FirstOntario Performing Arts Centre in downtown St. Catharines, and to Niagara Health, funding a bursary to support hospital staff taking classes at Brock. Anita Robertson was a nurse by profession and was also an active volunteer for the University and Niagara community.

Brock President Gervan Fearon said the University was “absolutely shocked and saddened by this incredible tragedy.”

“Joe had maintained a continued involvement in the University and he will be greatly missed by the Brock community and the large number of individuals in Niagara who knew and worked with him.”

Comerford said he was first inspired to be part of Brock’s Board because of the commitment shown by Robertson.

“Joe’s legacy at Brock University is an incredible foundation for successive Boards and the many outstanding developments today and into the future,” said Comerford.

Brock University Vice-President, Administration Brian Hutchings, who worked in the Robertson era for several years, remembered a dedicated family man who cherished his wife and kids. But he also recalled a person who never attended a meeting without doing his homework and being “impeccably prepared.” 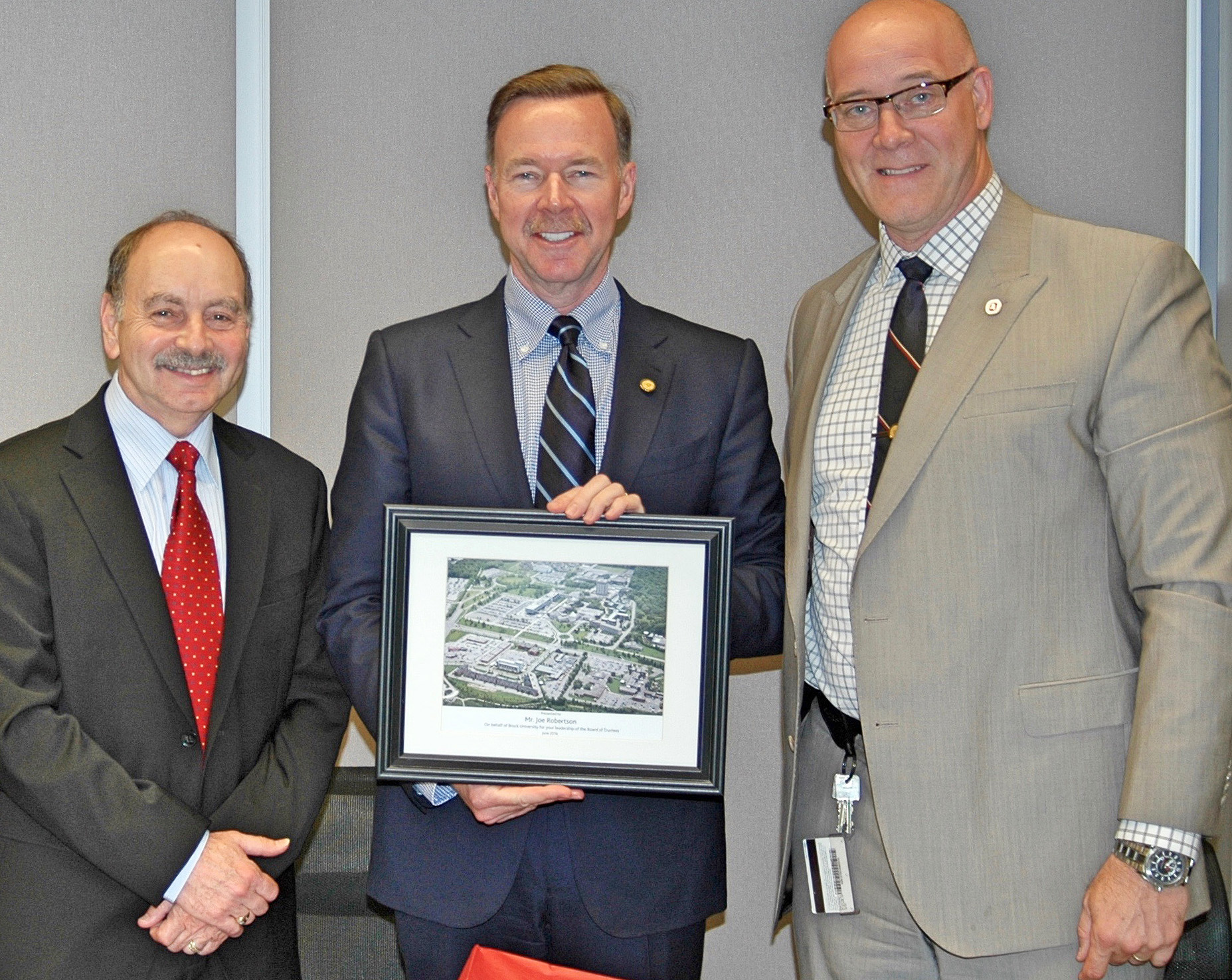 Joe Robertson, former Chair of Brock’s Board of Trustees, is honoured following his retirement from the Board in June 2016. Robertson is flanked by former Brock University President Jack Lightstone, left, and Vice-President, Administration Brian Hutchings.

“He came in, learned the environment and stepped up to a leadership role here at Brock,” said Hutchings. “I think we’re indebted to Joe for the amount of hours and work he put into Brock to make it the great place it is today.”

Jack Lightstone served for a decade as Brock President, much of it working closely with Robertson. Lightstone’s final day as President in June 2016 was also the day Robertson retired from the Board.

“Joe took on responsibility after responsibility, and with enthusiasm,” said Lightstone. “The thing that struck everyone about Joe was his commitment.”

The former President said Robertson was incredibly diligent, “in ways that were required in order to be a proper steward of the University’s affairs.”

“He was meticulous, and he always wanted Brock to have stretch goals, to reach beyond its current capacity, to constantly be better. That was evident in everything he did.”

John Suk, who sat on the Board for nine years with Roberston, and in 2014 succeeded him as Chair, was shaken by the news.

“As well as being a personal friend, Joe was a tremendous business leader who made a huge impact on Brock, and I was privileged to serve with him as his vice-chair,” said Suk.

“He took me under his wing and mentored me for my role as Chair after him. Joe had the courage of his convictions, and was a leader in his example, his accomplishments and his values. I cannot overstate what a loss this is for all of us.

“Anita similarly was a huge supporter of Brock and the community, and supported Joe at every Brock event I can think of,” Suk said.

Lightstone agreed, calling Anita a dedicated volunteer who helped the Soirée committee and became a key volunteer in the United Way campaign.

“This is a really, really sad day for Brock and for the Niagara community,” Lightstone said. “A devastating day.”