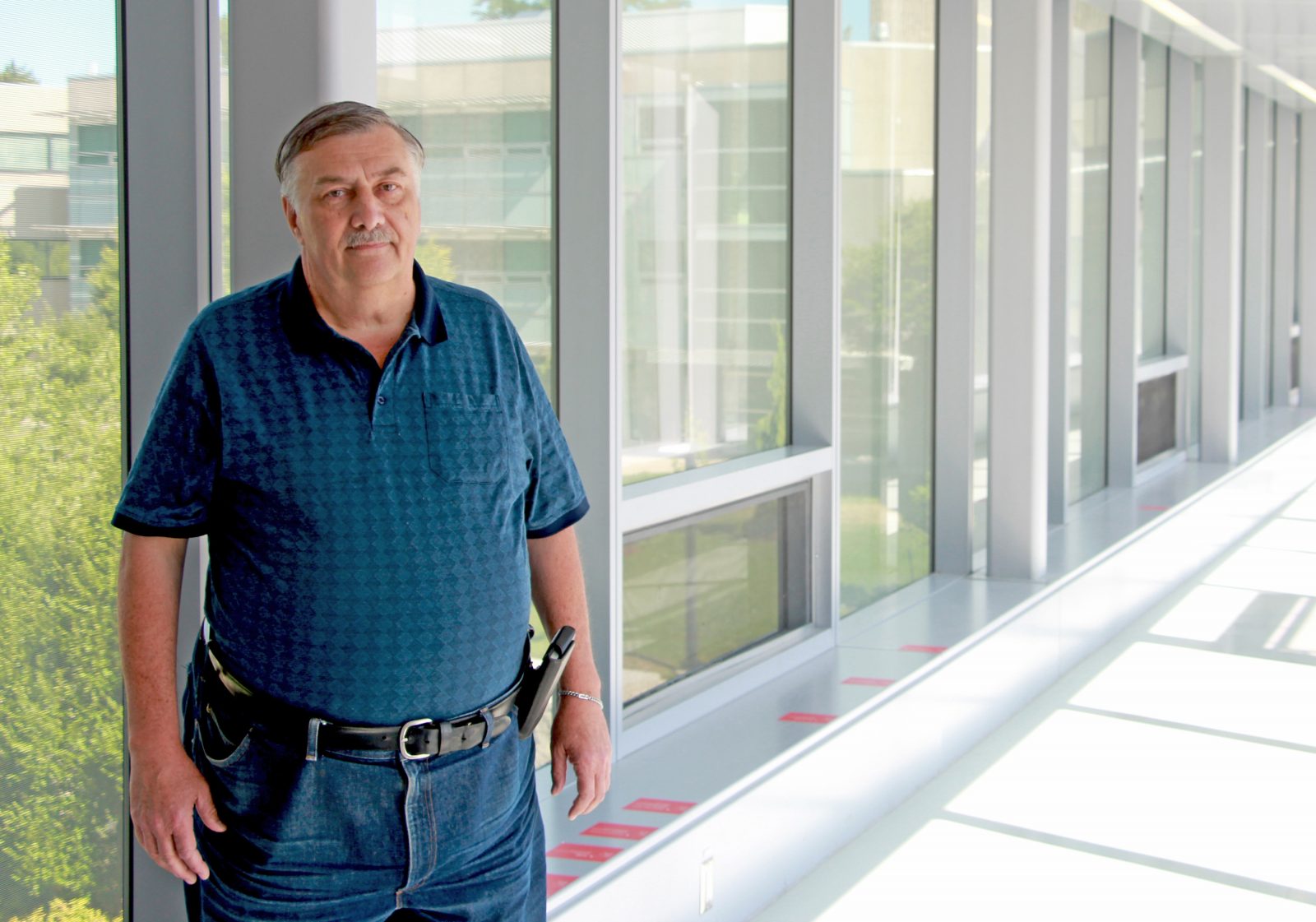 After more than four decades of service, senior lab instructor Frank Benko is retiring from Brock University on Tuesday, July 31.

After 41 years at Brock University, Frank Benko is retiring.

The senior lab instructor for the Faculty of Mathematics and Science has long been a fixture in the Department of Physics.

“When I came here, Brock was not much bigger than a large high school,” said Benko, who looked into attending the University at his high school science teacher’s recommendation.

The deciding factor was his introduction to then Department of Physics Professor, Frans Koffyberg, whom he met during an open house. Impressed by the enthusiasm Koffyberg displayed, Benko enrolled as a Physics major in 1974.

Initially, he found the change to university studies difficult and his marks suffered accordingly. Lower grades than he anticipated made him start questioning if his chosen field was the right fit.

As if sensing his doubt, Koffyberg spoke to him and, as Benko recounts, advised him to “hang in there.” The advice marked the start of a long-running mentorship and bond between the two.

By the time he completed his studies, Benko graduated with a first-class honours BSc and was promptly offered a job working as a research assistant for his mentor.

Aside from a one-year period when he worked as a research scientist with Gould Manufacturing Canada, Benko has worked at Brock.

After returning to the University to become Koffyberg’s full-time research assistant, the two produced 18 publications between 1978 and 1988. Along with participating in experimental research, Benko credits Koffyberg with teaching him about patience and persistence, both of which have been instrumental to his current position.

As senior lab instructor, Benko is considered a jack-of-all-trades. He manages all of the Department’s orders, finances, Workday tasks and arranges for the transportation and accommodations of all guests. Along with running labs, he also oversees teaching assistants and manages their workloads.

Despite the required juggling of time and flexibility, Benko said he has thoroughly enjoyed his position, particularly the interaction with students.

“One of my favourite parts is going into the labs in the afternoon with the students,” said Benko. “They’re fired up and looking ahead to a career. Witnessing that has been my favourite part.”

As word has spread about his retirement, many past and current students have been stopping by to reminisce with him. With 41 years at Brock, some connections made have spanned generations.

One particular student Benko taught more than 15 years ago is now a high school teacher who met his wife while she was studying Chemistry at Brock. Their daughter, Alicia Martin, recently graduated from Brock’s Department of Physics and plans to return to start her MSc.

Honoured with several awards during his career, including a Distinguished Service Award and Senior TA of the Year award, it was the testimonials provided by students that Benko found the most meaningful.

“I’m delighted to congratulate Frank on his long-running service to the University,” said Ejaz Ahmed, Dean of the Faculty of Mathematics and Science. “His dedication to student success exemplifies our commitment to teaching and research excellence, both within the Faculty and at Brock.”

Employed since the age of 15 and with the reality of retirement sinking in, Benko said he’s looking forward to some down time before he starts travelling.

“I’ve always dreamed of going to the east coast,” said Benko, who was inspired by photos and lobster brought back for him by Elizabeth Horvath, the Department’s Administrative Assistant.

Despite looking forward to what retirement has in store, Benko knows he is going to miss Brock and his colleagues.

“You haven’t gotten rid of me,” Benko said with a smile. “I plan on coming back to grab a coffee and catch up.”

Benko’s official last day at Brock is Tuesday, July 31. A retirement party will be held Thursday, July 26, from 2 to 4 p.m. in MC B203. Please RSVP to ehorvath@brocku.ca