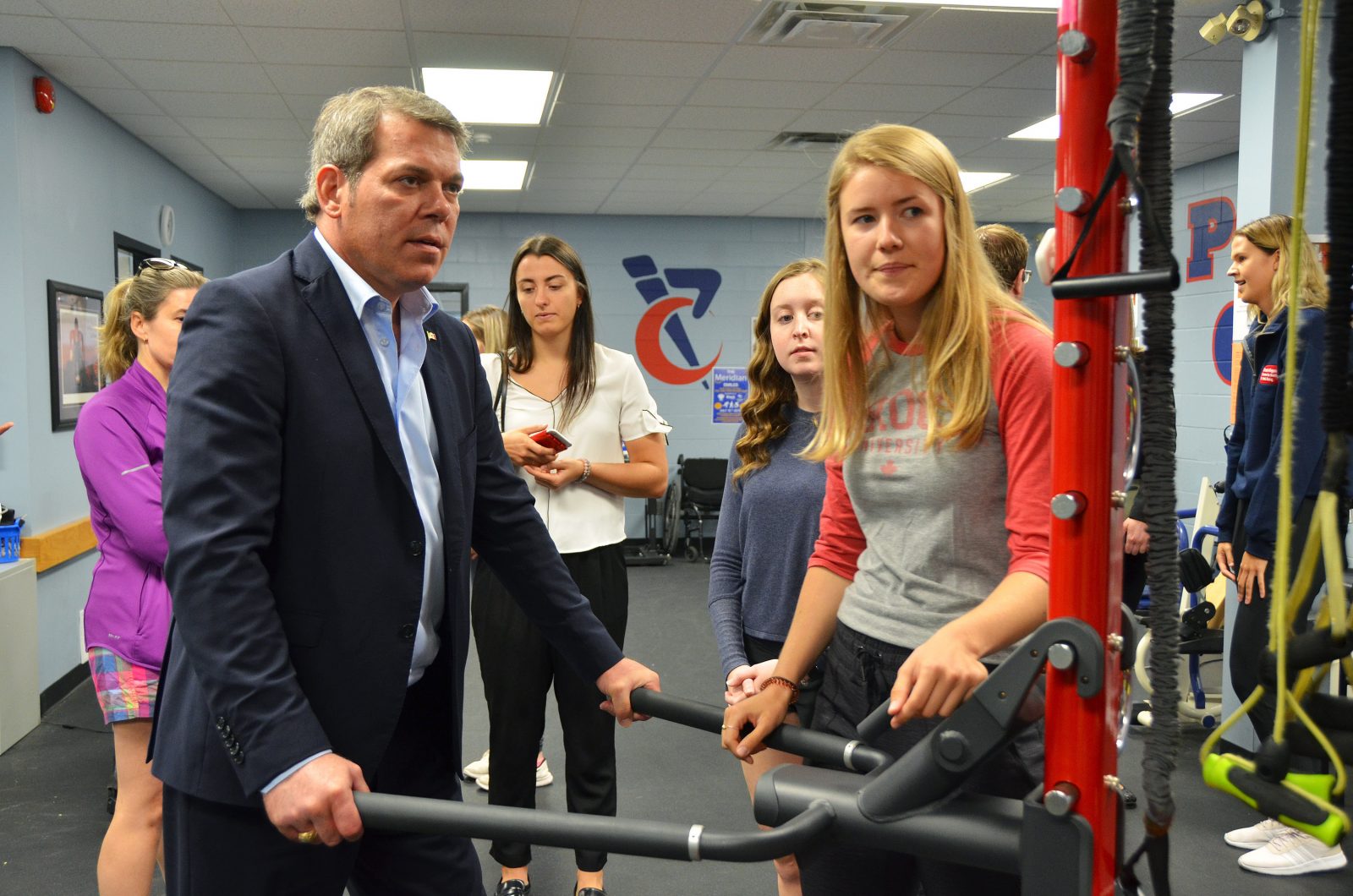 Niagara Centre MP Vance Badawey, left, stops to use equipment during a visit to the Brock-Niagara Centre for Health and Well-Being Friday. Badawey is pictured with fourth-year Kinesiology student Rachel Postma.

Two Niagara area politicians got a first-hand look Friday at how researchers at Brock University plan on using grants they were awarded in recent federal government funding.

Members of Parliament Vance Badawey (Niagara Centre) and Chris Bittle (St. Catharines) met with Brock researchers Nicole Goodman and Kimberley Gammage, along with some of Gammage’s students, on the heels of research funding from the Social Sciences and Humanities Research Council of Canada (SSHRC).

Earlier this month, SSHRC announced that it had awarded Goodman, Gammage and nine other faculty members more than $1.1 million in Insight Grants. In addition, 16 students were awarded SSHRC student grants of $565,000 for a grand total of $1.6 million at Brock. 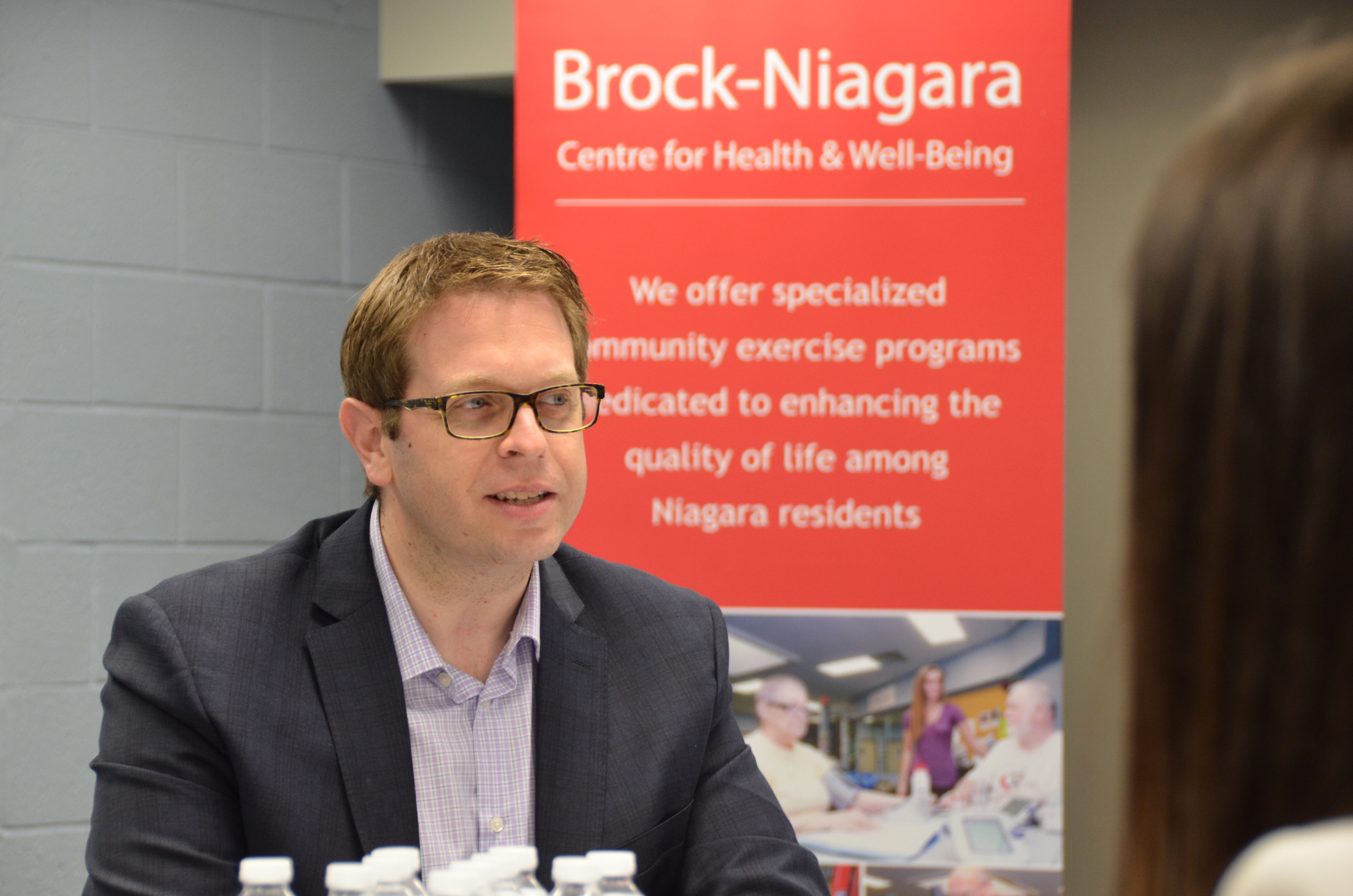 To commemorate the funding, Badawey and Bittle visited Gammage’s lab at the Brock Research and Innovation Centre (BRIC) and also spoke with Goodman.

“It’s always great as a government that has really invested in science and research to see the rubber meeting the road and to see the work that’s being done, to see the students and faculty that are involved and how it benefits the community and beyond,” says Bittle.

“It was a pleasure to visit Brock, experiencing first hand their leadership in the area of social science and research. In today’s case specifically to health, also recognizing that the Canada summer jobs program is serving its purpose to prepare Brock students for their future,” Badawey says.

Gammage, who is an associate professor in the Faculty of Applied Health Sciences, will be studying how people of all age groups can use physical activity as a tool to love and respect their physiques.

“A lot of the body image research focuses on younger women and women specifically. It’s nice to reach out to older populations as well as men and women,” says student Sarah Galway, who will be starting her master’s in September under Gammage.

“The research in this area generally focuses on the negative,” says Galway, who received a SSHRC Joseph-Armand Bombardier Canada Graduate Scholarship (master’s). “It’s great to take a more positive approach.”

Goodman, who is assistant professor in the Faculty of Social Sciences, is studying how online and telephone voting impacts voter turnout, the composition of the voting population and residents’ attitudes towards local political institutions and representatives.

“Online voting is becoming more commonplace: people are using it, and we know little about the effects,” says Goodman. “Nobody knows what happens when you make elections fully electronic. This research will give academics and government officials a sense of what types of effects this policy change could have.”

Vice-President, Research Tim Kenyon says he’s “delighted” by the visit of the Members of Parliament.

“It shows that there is a real commitment and awareness on the part of our elected representatives to show the role that public funding plays in supporting research,” he says.

SSHRC’s Insight Grants program provides funding for three to five years for research that accomplishes a number of goals, including building knowledge and understanding, supporting new approaches to research and providing training experiences for students.