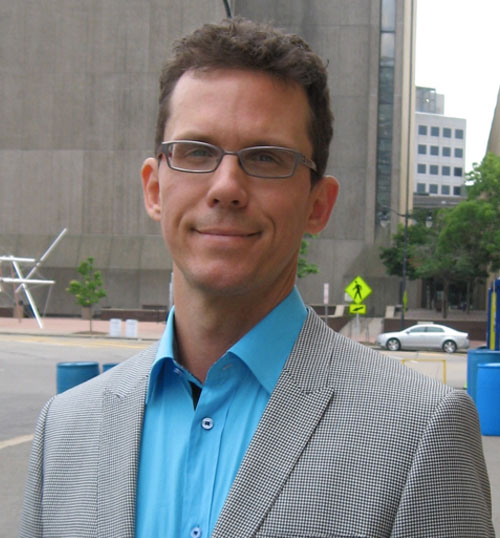 Associate Professor Stefan Dolgert of the Department of Political Science presented on Socrates as Dungeon Master earlier this spring.

Was Socrates the first “dungeon master?”

According to Stefan Dolgert, Associate Professor in the Department of Political Science, the ancient Greek philosopher’s appearance in Plato’s Republic helped lay the groundwork for role-playing games like Dungeons and Dragons.

“In Plato’s most famous dialogue, Socrates asks a group of young friends to imagine that they are the founders of a new city, just as a ‘dungeon master’ constructs an imaginary adventure,” Dolgert explains.

The parallels don’t end there. “He invites his young interlocutors to imagine and enter a fictitious world, creates a goal for them to pursue collectively, structures the pursuit with various rules and restrictions, lets the interlocutors play distinct roles within the team, and finally, allows the players to achieve their objective,” he says.

“Plato, by constructing this game scenario, has created Socrates as the first dungeon master.”

Dolgert recently presented his ideas in Singapore at an innovative interdisciplinary conference on Play, Creativity and Imagination, hosted at Yale-National University of Singapore.

The event brought together a diverse group of experts from Canada, Australia, the U.S. and Singapore to examine how play is researched and incorporated in fields such as history, philosophy, political theory, literature, music, creative writing, theatre, psychiatry, film-making, neurology and neuroscience.

Dolgert’s own talk focused on Plato’s Republic, but he points out that the notion of political philosophers setting up a game scenario to be played out in different ways may be quite widespread.

“Many of the most important texts of political theory are in fact best read as games,” Dolgert says. “They basically invite their readers to play a scene imagining human society at its origins, and then allow them to replay it over and over again by slightly changing the inputs to allow readers to see how the outputs change. For example, what if humans were actually more co-operative than competitive? Would the result be more democracy or less?”

Play in political philosophy may sound light-hearted, but it actually has far-reaching implications for the whole Western canon.

“We’ve been told for so long now that these texts give us access to fundamental truths about human life, but if I’m right, we should worry that what’s really been going on is that we’ve been captivated by texts that are ‘fun’ rather than ‘true,’” says Dolgert. “Maybe we’ve been missing something fundamental because we’re lost in the clouds, playing intellectual games, instead of really looking at the world.”

By way of example, he points to Thomas Hobbes’s Leviathan, which depicts humans as naturally competitive.

“Leviathan has become a touchstone for international relations thinkers, who say that states must protect themselves with strong militaries because humans are naturally aggressive,” Dolgert explains.

“But if Hobbes’s set-up is a game, we need to rethink our assumptions about how naturally aggressive humans are, which means changing how we see the basics of international relations and the prospects for co-operation and coexistence globally.”

Dolgert plans to revisit this topic when he collaborates with other conference participants in a joint panel at the next meeting of the Western Political Science Association.

In the meantime, he’ll be working on a book project that brings together novelists/playwrights to rewrite Plato’s Republic, having Socrates engage in dialogues about justice not with wealthy young men, as in Plato’s original Republic, but instead with a slave, a young woman, an immigrant and a domestic animal.

“In my view, this is actually what Plato wanted his readers to do — to take a look at justice from different perspectives by playing along with Socrates,” Dolgert says.

Rather than Plato “giving us a dogmatic statement of his political principles though the character of Socrates” in Republic, Dolgert believes that he was “inviting us to play a game with the idea of justice, and that the students are the really important characters.”

“By making four different versions of the dialogue present in one place, this book will bring that idea to life.”