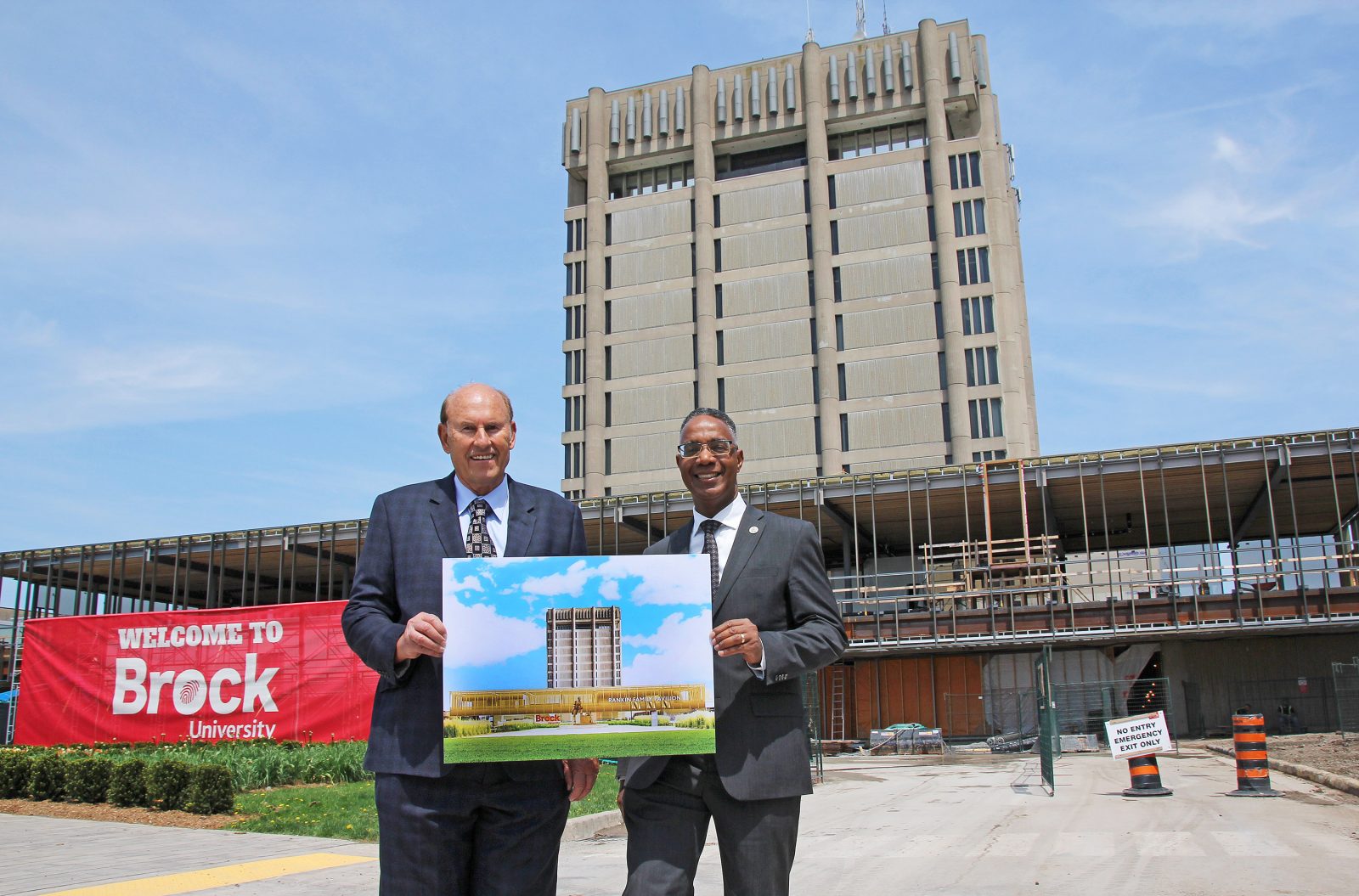 The new front door to Brock University officially has a name.

The transformational construction project that is giving a new look to the base of the iconic Schmon Tower when it opens this fall, will be known as the Rankin Family Pavilion, named to honour a significant donation by Niagara businessman Tom Rankin.

The $2-million gift was announced Wednesday, May 16 before Rankin toured the construction site with Brock President Gervan Fearon and other University officials.

First announced in November 2016, the $19-million Brock LINC project moved forward with funding from both the federal and provincial governments. The Rankin Family Pavilion will be a striking two-storey complex that will provide space for students to gather and to nurture Niagara’s growing culture of innovation. 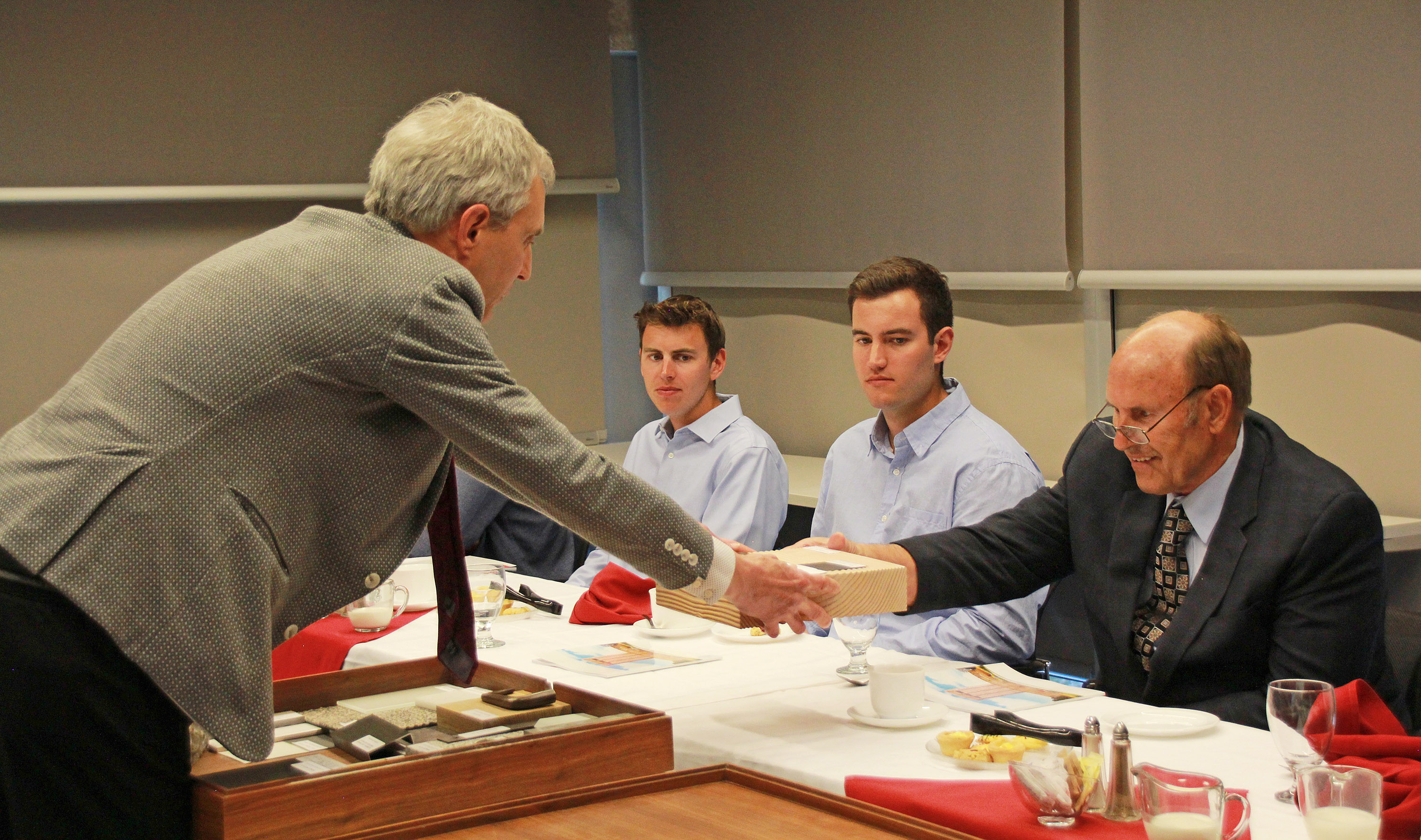 Project Manager Scott Roper shows Tom Rankin the different finishes that will be used in the Rankin Family Pavilion.

The project is converting the former open-air pedestrian mall in front of Schmon Tower into a modern, purpose-built 41,000-square-foot research, innovation and commercialization centre that places entrepreneurship at the entranceway to the University.

It will provide the Brock community with the space to experience and experiment with entrepreneurship and will add a strategic asset within Niagara’s innovation ecosystem that supports a greater number of research and development partnerships between Brock and Niagara’s businesses and social organizations. Brock is known for its leadership in experiential and co-op education, and the new facilities will advance entrepreneurial teaching and learning at Brock.

Rankin, a well-known Niagara businessman who started Rankin Construction in 1978 and a former Brock University Board of Trustees member, said the space will be a central hub for the University.

“With the Maj.-Gen Isaac Brock statue right in front of it and the Goodman School of Business right there, everything kind of emanates from that spot,” he said.

Rankin is thrilled to be supporting a project he has been thinking about for years.

“A number of years ago when I was on the Board of Trustees I had this idea of closing it in. I saw the potential in making this a real focal point for the University,” he said. “It’s going to be a great front entrance to Brock.”

Fearon thanked Rankin for his generosity, and said public institutions such as Brock rely on the support from their community.

“For years now, Brock University’s students, faculty and staff have benefited greatly from the generosity of Tom Rankin,” said Fearon. “His support has been invaluable. And now he is once again demonstrating the importance that he places on post-secondary education within our community of Niagara, and for that we are extremely grateful.”

Not only is Rankin Construction a respected company behind major civil projects such as the Meridian Centre in downtown St. Catharines, Rankin is known as a generous philanthropist whose impact on the community includes the annual Rankin Cancer Run, which has raised $7.5 million for local cancer care facilities.

In 2017, Rankin was the recipient of the Niagara Region’s T. Roy Adams Humanitarian of the Year Award and was honoured with an honorary doctorate by Brock.

“I grew up in Catholic schools and we were always taught to be generous to your fellow human beings,” Rankin said. “I often say I’m an entrepreneur with a conscience. I’ve never been in business just to make money.”

The Rankin Family Pavilion is expected to open this fall.