From life-saving surgery to career-saving opportunity: the journey of Badgers coach Marty Williamson 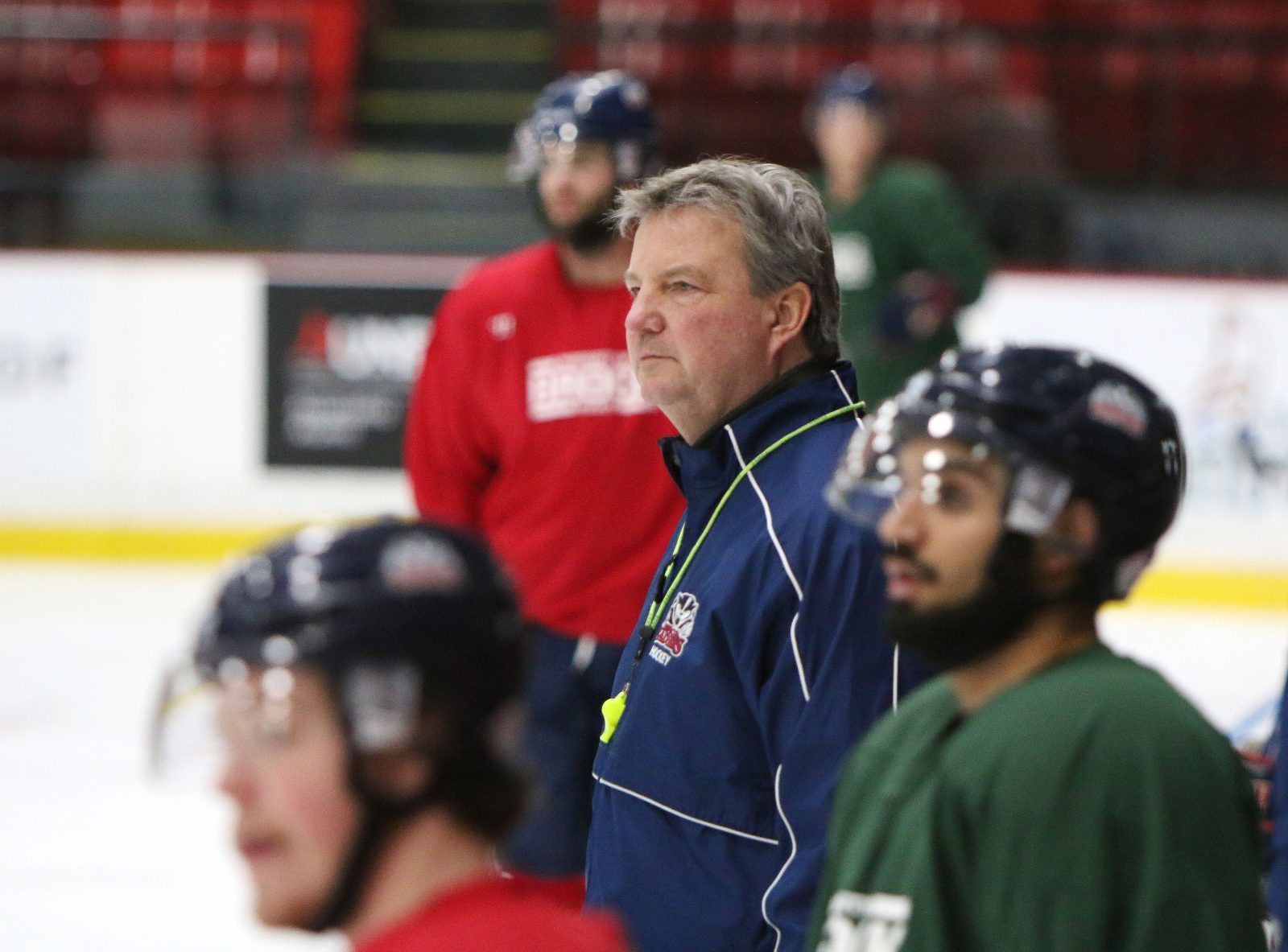 When Marty Williamson got the call about an opportunity to coach the Brock Badgers in the summer of 2017, he wasn’t sure if saying yes was the right move to make.

He’d spent more than a decade coaching in the Ontario Hockey League before being unceremoniously fired by the Niagara IceDogs after leading them to six-straight playoff appearances. He thought maybe it was time to change directions.

“I debated getting into scouting or doing something else. I wasn’t sure this was the path I wanted to take,” he said.

But something about the Brock job made Williamson take the plunge.

Now, seven months and a one successful debut season with the Badgers men’s hockey team later, and the 54-year-old coach has a renewed sense of focus.

“This team has done a ton for my psyche and knowing what I wanted to do,” Williamson said Thursday in Fredericton after the Badgers were eliminated from the USPORTS Cavendish Farms University Cup National Championship tournament. “I’ve just loved this season and loved this hockey team. It has re-energized me to know that coaching is what I love to do.”

The fact that Williamson is even still able to coach is a bit of a miracle.

In March 2015 while the IceDogs were battling Oshawa in the OHL playoffs, it was discovered that Williamson had suffered an aneurysm in his aorta as a result of a problem with one of his heart valves. The aorta had ballooned to nearly four times the normal size and would require surgery to repair it.

“I feel very lucky. There were no symptoms, so it was pure blind luck that they found it. It’s just something going on inside of you,” said Williamson, who credits IceDogs athletic therapist Peter Dobbin with saving his life after pushing him to go to the hospital after he fainted in the shower.

Williamson had major surgery to replace the damaged aorta and then spent further time in the hospital dealing with an elevated heart rate. But by fall of 2015 he was given the green light to coach again.

“It really has changed things for me. I look at things a little differently,” Williamson said. “It happened so fast that you really couldn’t get caught up in it much. I think it’s tougher on your wife and kids than it is on you because you just kind of go through it.”

Williamson served as coach and general manager of the IceDogs again in the 2015-16 season before the team decided to take things in a different direction and released him. He coached his son’s St. Catharines minor hockey team the following year before the job opened up at Brock.

Williamson’s first time coaching the team in a game was at the Steel Blade Classic held at the Meridian Centre in downtown St. Catharines — his old stomping grounds with the IceDogs.

After going 14-9-5 in the regular season, the Badgers dumped Laurier, Guelph and York in the playoffs to earn themselves a trip to the National Championship tournament for just the second time in school history.

A loss to the St. Francis Xavier X-Men in the quarter-finals Thursday in Fredericton brought a successful season to an end. But reflecting back, Williamson said he couldn’t be happier that he said yes to the Badgers.

“I can’t say enough about the people at Brock. I’ve said it’s like you’re on two teams. There’s a fantastic team at Brock with all the coaches and management and the athletic director pulling for you and then there’s the team that’s in the dressing room that’s a fantastic group,” he said.

“They were a team that wandered. They hadn’t done much the past couple of years, so to have this much fun, I couldn’t be prouder of what they accomplished this year.”

As for how his coaching style has changed since his 2015 health scare, Williamson admits he’s still “passionate” behind the bench.

“I said I would settle down a little bit, but these guys will tell you pretty quickly that it didn’t last too long. I’m kind of fiery at times and laid back at other times so I don’t think it has changed me in that way at all.”