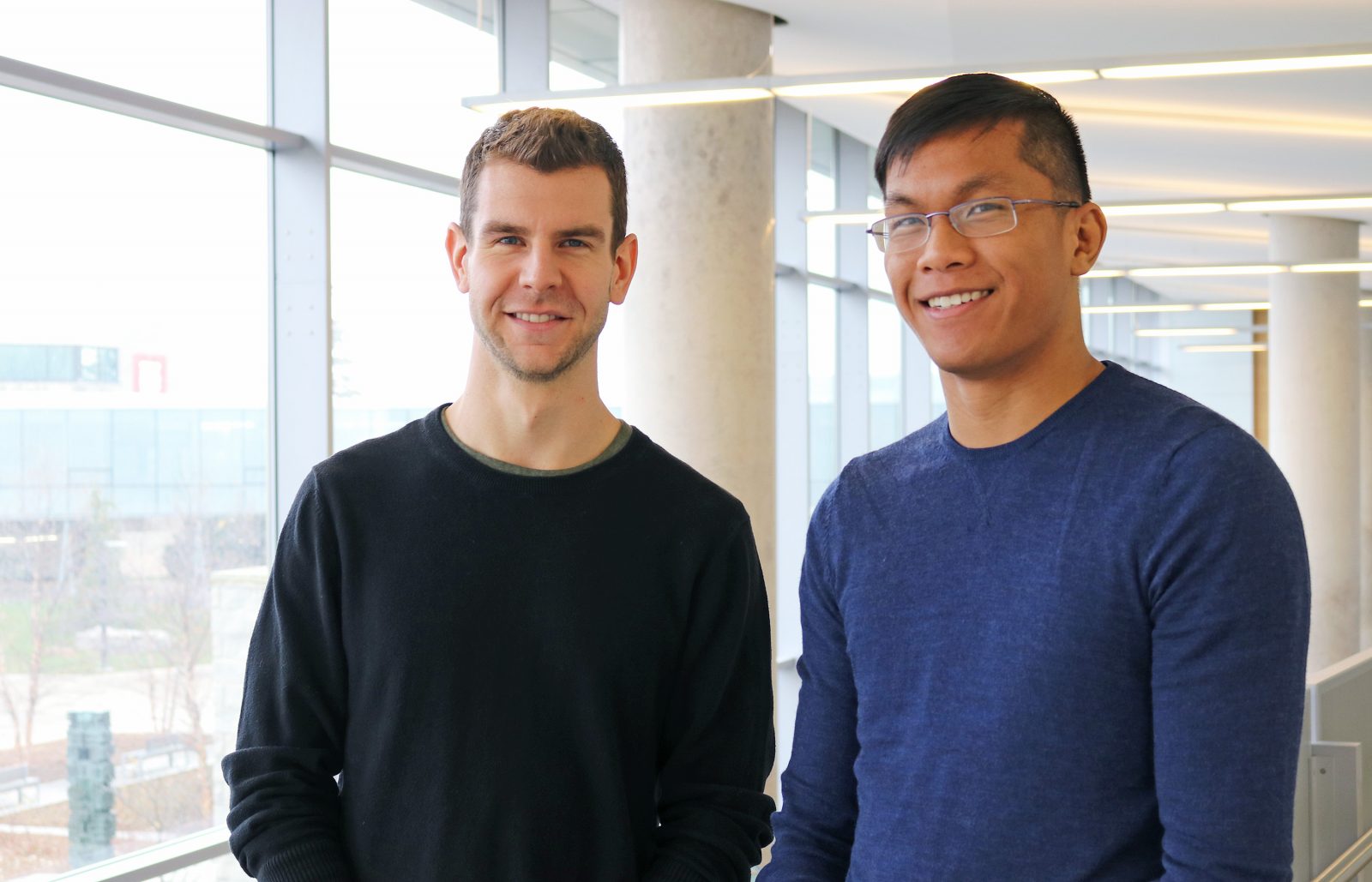 Devon Day and Jomar Gacoscos, both students from Brock’s Faculty of Applied Health Sciences, will present their company called Augmented Rehab at Monster Pitch next week.

This is the third in a series of four stories featuring the finalists of Monster Pitch, the annual student business competition hosted by the Goodman School of Business student club Brock Innovation Group. This year’s competition will be held at the FirstOntario Performing Arts Centre Monday, Jan. 8.

Jomar Gacoscos, a fourth-year Kinesiology student from Hamilton, and Devon Day, a third-year Master of Science student in Applied Health Sciences from Barrie, started a company with the goal of helping people with mobility impairments move more freely through the use of augmented reality technology.

Since launching Augmented Rehab in May, the pair have built an application and set their sights on assisting people with Parkinson’s disease.

Gacoscos explains that as part of a Parkinson’s patient’s therapy, pieces of paper are typically affixed to the floor to show where they should step.

“When the patient sees the paper, they know where to put their right or left foot and it makes the walking process easier and more automatic for them.”

Day, who also holds a bachelor’s degree in neuroscience from Brock, explains that this part of the rehabilitation program is called external cueing and it provides patients with additional information to respond or react to.

“As opposed to generating an internal command to take a step or move through a walking pace, they now have a cue that they can react to and it shifts their attention to use a different area of the brain,” he says. “We have just moved cueing from a physical realm to a digital realm to make it more accessible.”

The pair have built software that, when used with an augmented reality headset, shows holographic imagery so patients can see the cues in front of them.

Since taking the second-place prize at a hackathon last year for their idea, the duo dedicated more time to developing it further.

“It’s all about empowering people by improving their limits on mobility. We take so many motions for granted throughout a normal day, whereas there are many patients who are dependent. It’s all about providing them with the ability to walk more freely.”

Both students have been involved with BioLinc’s Kick-Starting Entrepreneurship program, which they say has helped them better understand the business side of their discipline. The program provides mentorship and networking opportunities for young entrepreneurs in Niagara.

Day says he is excited to showcasing their product at Monster Pitch next week.

“Regardless of the outcome, we are looking forward to getting up on that stage and presenting what we see for the future of technology in this industry,” he said.

Monster Pitch will see four short-listed student entrepreneur groups pitch their business ideas before a panel of judges for a chance to win a funding and startup services package worth $14,000.

The sold-out event is hosted by the Brock Innovation Group in partnership with the Goodman School of Business and BioLinc and is sponsored by Spark Power Corp.

The judging panel includes David Chilton, author of The Wealthy Barber series, and returning judges Bruce Croxon, co-host of BNN’s The Disruptors and CEO of Round 13, Deborah Rosati, corporate director and co-founder of Women Get On Board, and Jason Sparaga, co-founder and co-CEO of Spark Power Corp. and founder of Spara Capital Partners.