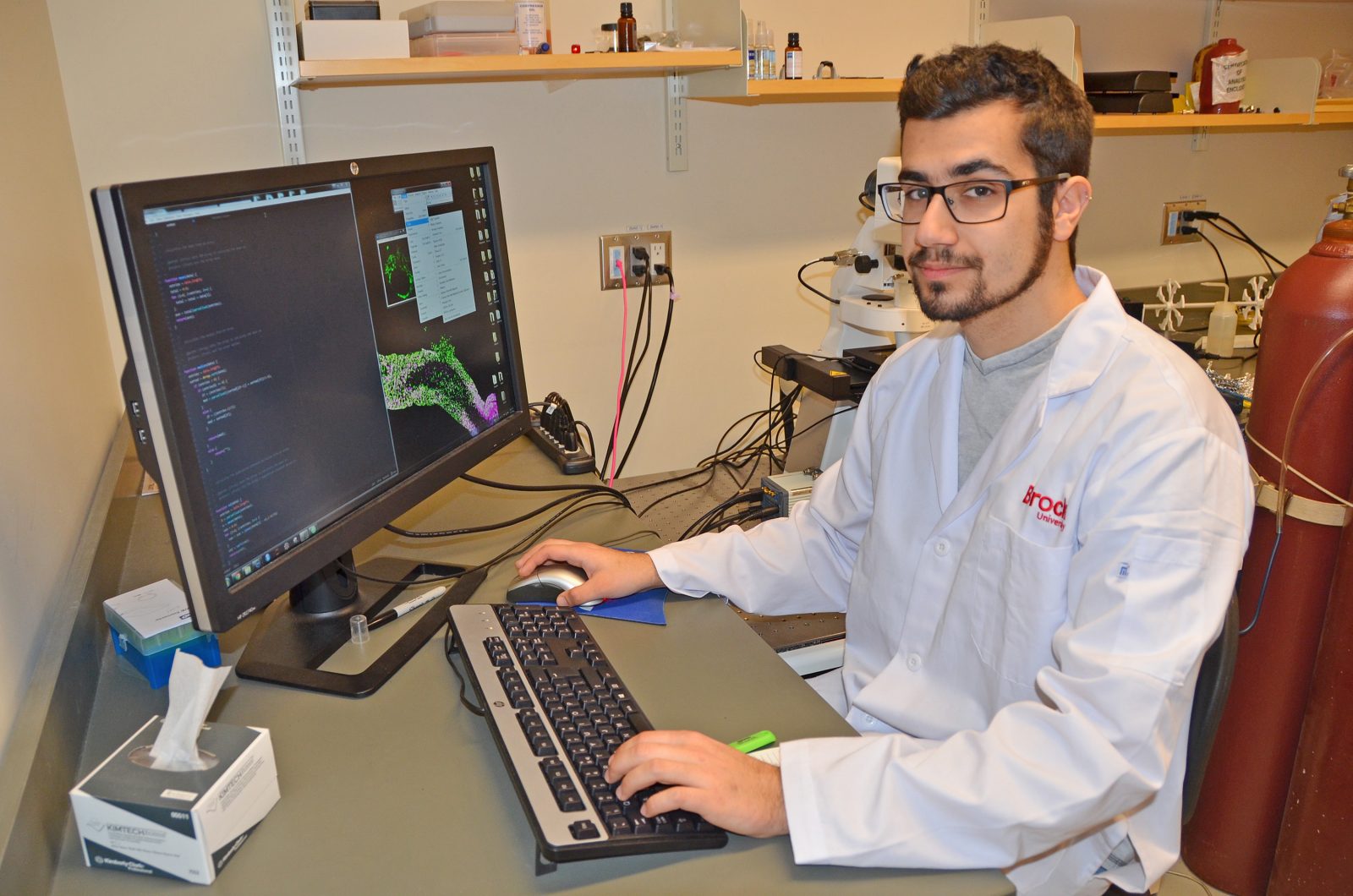 Andrew Valente, a grad student in the Department of Biological Sciences, has developed a set of tools that researchers around the globe can freely access to better measure and understand the movements of mitochondrial networks.

Mitochondria are essential to human and animal life, but analyzing their ever-changing configurations through a microscope is a challenge. As they continually fuse and fragment, they affect how cells, and therefore bodies, work.

Studying the tube-shaped organelles that provide energy to cells has recently been made easier through the work of a Brock University graduate student.

Andrew Valente, a student in the Department of Biological Sciences with an interest in computer coding, has developed a set of tools that researchers around the globe can freely access to better measure and understand the movements of mitochondrial networks.

“I use a lot of open source software,” he says. “I thought it would be a good idea to adopt open source code because then we can have everybody looking at it and verifying that it’s working correctly.”

In an open source software arrangement, anyone can study, modify and distribute software for any purpose, which encourages widespread collaboration and free, public use.

Valente, from Thorold, is studying the structure and movement of mitochondrial networks, and is developing methods to track them for his master’s program.

He remembers being struck by the fact that research on mitochondria had relied heavily on qualitative descriptions of how mitochondria appear.

“We need to measure the shape, length and size of mitochondria so that we can move away from subjective descriptions of what mitochondria look like,” says Valente.

He noticed the mitochondria he was studying “looked a lot like roots,” and recalled the time he examined a photograph of roots in ImageJ, a scientific open source image processing program.

“The mitochondrial structures are somewhat similar to roots,” he says. “I thought that it would make sense to use a similar image-processing method to determine the lengths of the branches of mitochondria that make up the network.”

He wrote computer code that built upon an existing piece of software.

“That’s the beauty of open source projects: you can quickly adapt what has already been done by others for your own needs.”

The method was a success. Valente went on to write computer codes that would enable researchers to measure mitochondrial structures in three dimensions and over a period of time.

He posted his codes on an open-source software development platform called GitHub so that they could be freely accessible to others, who would then be able to propose changes to improve the algorithm and code itself.

“It has allowed other researchers to easily provide semi-quantitative parameters to describe the mitochondrial structure,” says Valente. “This makes it easier to be more objective.”

Mitochondria create most of the energy that the body needs in order to live and support the functioning of organs. More than 220 illnesses are associated with mitochondrial dysfunction, according to MitoCanada.

“It’s really important for us to analyze mitochondrial networks and understand how they’re put together, and that’s where Andrew’s work comes in,” says Stuart.

“Previously, we would say, ‘Yes, that’s a fused network and that’s a fragmented network,’ but we didn’t get much more technical than that,” he says. “As more and more people became interested in what was going on with mitochondrial network dynamics, better tools started to develop.”

Stuart says he is pleased that Valente’s codes are open source, saying that “science must be conducted that way or progress will be slowed and we will all be worse off.”