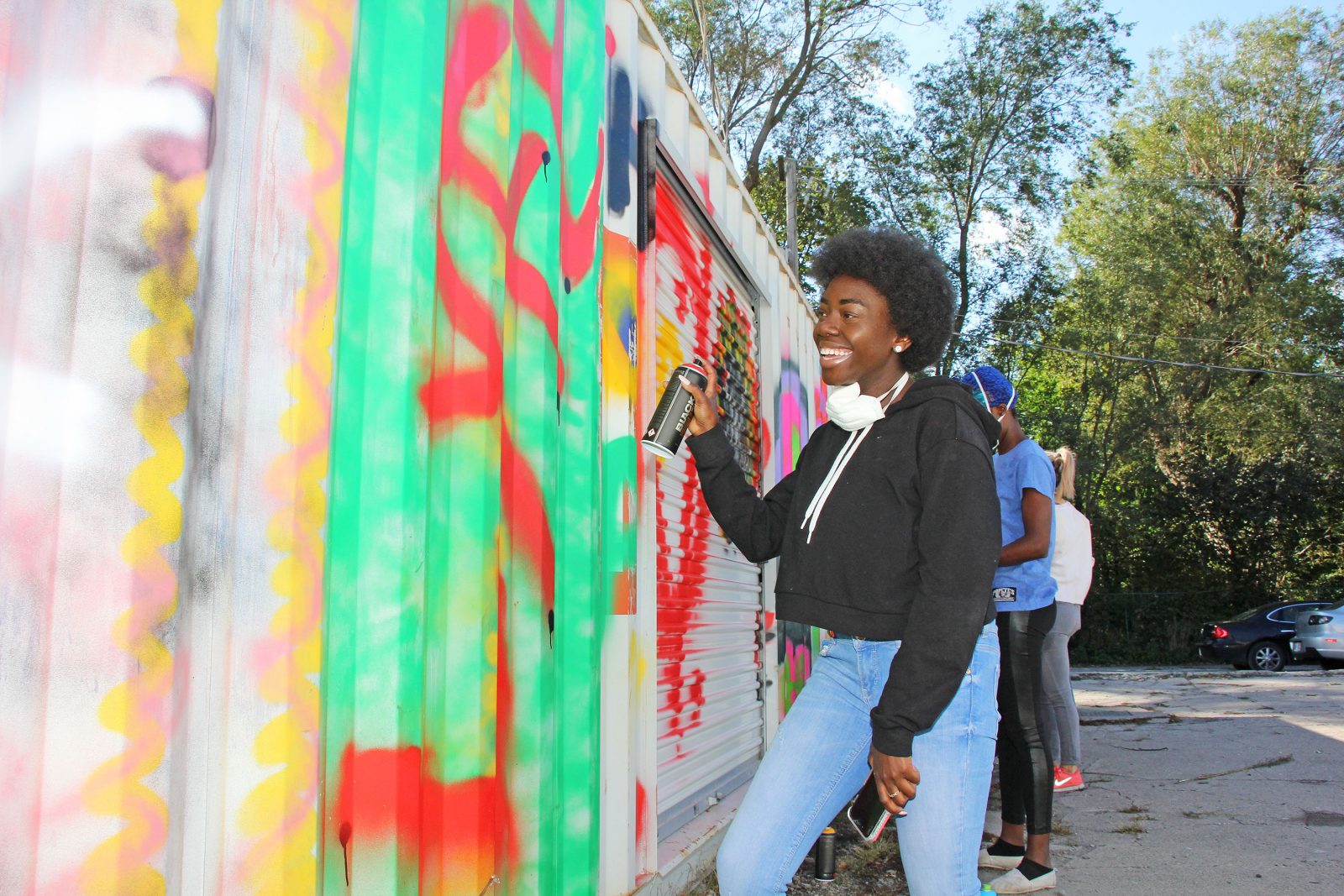 By the time the paint dried, there was a symphony of colour on a once bare area in downtown St. Catharines.

Students in Brock University’s Hip-Hop and the Urban Working Class course took their learning to the streets in mid-October as they participated in an experiential graffiti exercise behind the St. Catharines Furniture Bank.

“The spray can was their violin and the graffiti was their symphony,” said local graffiti artist Mathew Vizbulis, who helped the class complete their public art display. 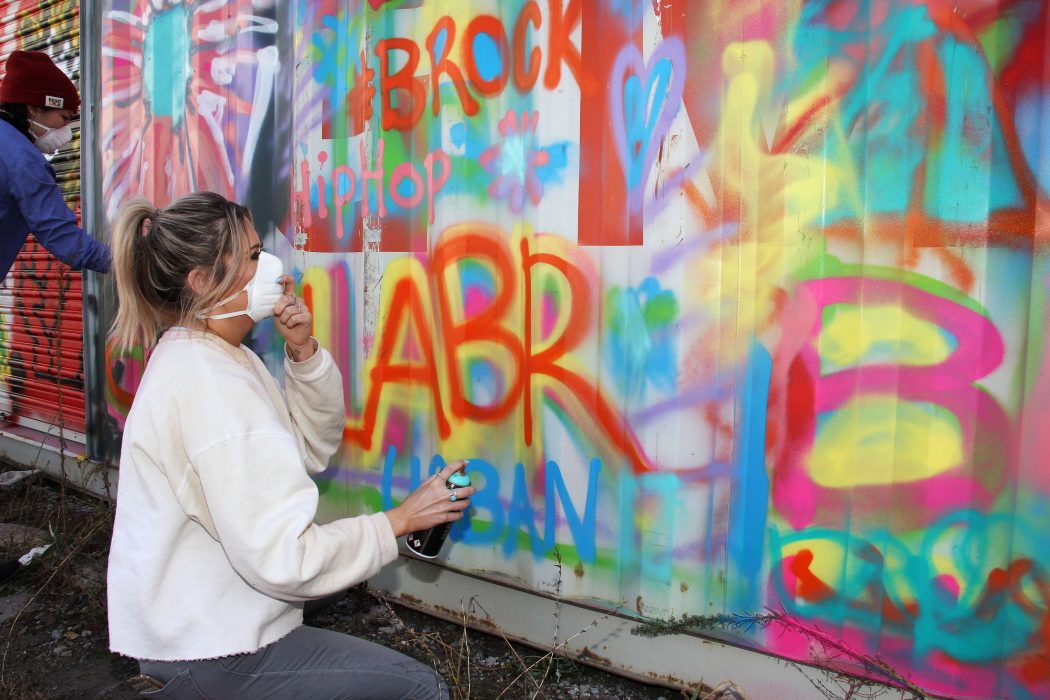 Fourth-year Communications student Sara Gallagher took inspiration from the Centre for Labour Studies while participating in a graffiti project in downtown St. Catharines as part of the Hip-Hop and the Urban Working Class course.

The second-year Labour Studies course introduced students to hip-hop culture from around the world and the resistance to the status quo that often comes with it.

“Graffiti writing, along with rapping, DJing and breakdancing, is one of the four elements of hip hop culture,” said Assistant Professor Simon Black. “In the class, we discuss cities as spaces of inequality, power and resistance. Our week on graffiti examines who has the power to shape public space.” To examine this concept up close, students in the course applied to take part in a hands-on workshop, with successful applicants given the freedom to paint any subject while helping to complete a large-scale graffiti project.

Vizbulis worked alongside the students and offered first-hand insight into the hidden culture of resistance they had studied in class.

“Because the art form of graffiti is often mystified by the media, people see it as something that only exists in back alleys, and they never meet the people who do it,” he said.

Though the students were creating their art legally, on storage crates behind the Furniture Bank with funding from the St. Catharines Downtown Association, they were still able to experience many of the sensations that come with producing graffiti in an urban environment.

“It’s cool to do something that is often seen as illegal, legally through your school,” said fourth-year media and communications student Kiyosha Teixeira. “I always wanted to know how people did graffiti. I wanted to learn about what it says and why it’s there because it’s not often taught in art classes.”

“It integrates students with their community,” she said. “It’s provided me with an experience that I would not have had otherwise.

Providing diverse experiential opportunities to link students with their community is a key focus of the University’s Experiential Education team.

“Brock’s reputation as a leader in experiential education comes from the diversity of opportunities the experiential exercises offer to students,” said Carolyn Finlayson, Experiential Education Co-ordinator in the Faculty of Social Sciences. “Beyond traditional opportunities, such as consulting projects and co-op programs, Brock is also enabling students to grow personally and professionally in their community through creative exhibitions and performances such as this one.”

Vizbulis said the exercise went beyond artistic expression and community involvement, also providing practical project-management applications that students could use in their careers.

“When you are responsible for the artistic endeavour yourself, you are more modest with your materials,” he said. “You are working in close proximity to others, and you need to think about use of space.”

“This is so hands-on,” she said. “We are immersed in the culture of hip hop and that helps us to relate to what we are learning in class. At the same time, we are able to relate to a subsection of society that often isn’t seen in the mainstream and bring it into a positive light.”

As the painting project drew to a close, the students’ bright graffiti filled a space that was once grey and allowed everyone involved to reflect on what they had produced.

“This was a safe space for us, but we still got a sense of what it’s like to do graffiti when it’s not safe,” said Gallagher.

For Vizbulis, the project created a feeling of unity amongst the students as they produced the unique artwork together.

“The art project represents the togetherness of a common idea and connects that idea with other people,” he said. “The students who successfully applied to do this got to bring that idea out of themselves while others around them did the exact same thing.”

Vizbulis is no stranger to working with Brock University students.

In September, he spent time with a third-year Interpretive and Critical Writing in the Arts class, teaching students about graffiti and hosting an interactive workshop that allowed them to practise painting outside of Rodman Hall Art Centre.

Vizbulis’ work will also be featured alongside the artwork of students in an upcoming Rodman Hall show, Colour Constructs, which runs Nov. 30 until March 4. Through his art, he will offer visual comment on Material Girls, another Rodman Hall exhibition that celebrates Canadian and international female artists. Material Girls runs until the end of 2017.