Global celebration a hit on campus 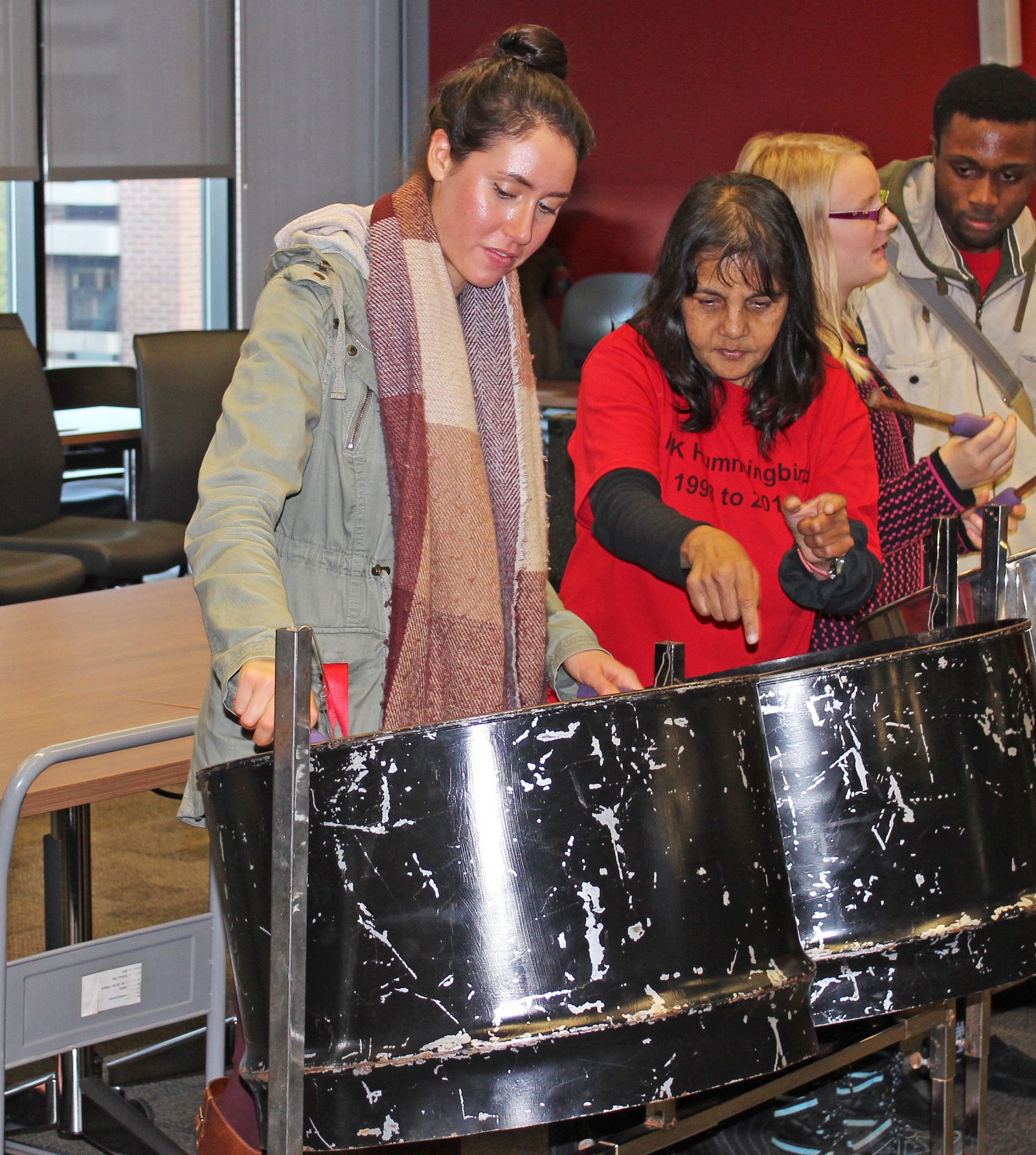 Fourth-year Medical Sciences student Vanessa Cservid learns to play the steel drums with instruction from a member of the PK Hummingbird Steel Orchestra on Tuesday, Nov. 7.

The echo of steel drums mixed with laughter could be heard flowing from Sankey Chamber on Tuesday, Nov. 7.

Sounds of the Caribbean filled the nearby halls as students tried their hand at playing the traditional instruments originating from Trinidad and Tobago. 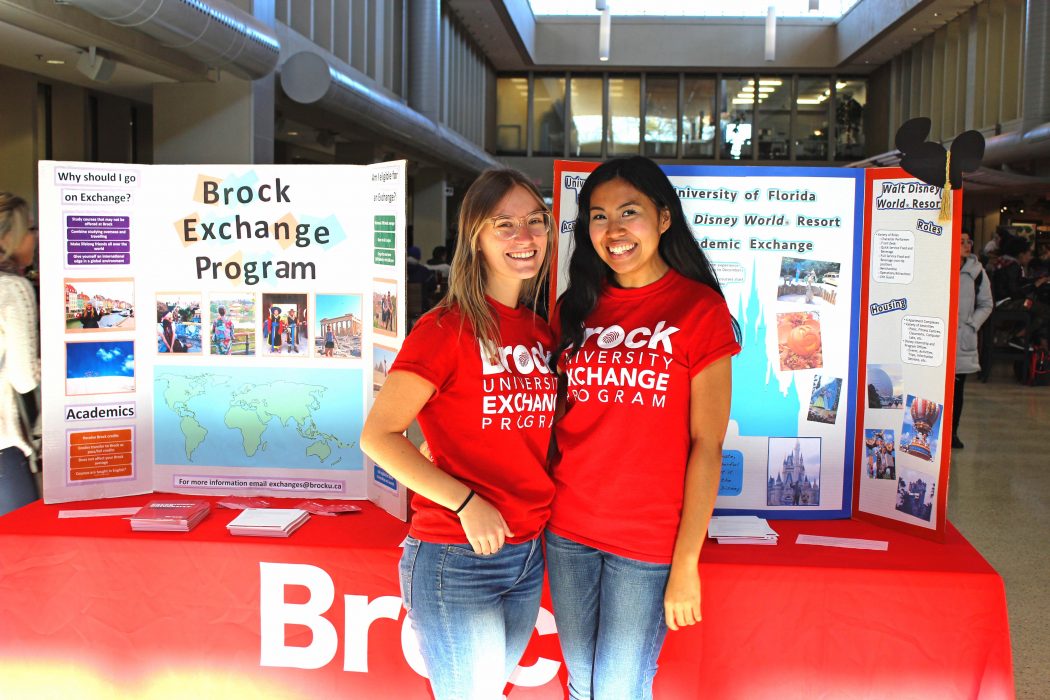 As one of the founders of GoLive, a live music club at Brock, Cservid felt the steel drum demonstration was a great way to see “students from all Faculties, backgrounds and cultures come together through music.”

The drum showcase was one of a series of events and activities hosted by Brock International Nov. 6 to 10 to highlight the role internationalization plays in Canada’s culture, and economic and social well-being.

Market Hall was home to the Exchange and Study Abroad Fair on Nov. 8, with students learning about working and studying abroad from the 40 international educational partners in attendance.

The art of henna, or mehndi, has been practised for centuries in India, Africa and the Middle East and is traditionally only applied for special occasions, such as weddings.

“I don’t know how they do it,” said second-year Concurrent Teacher Education student Mikayla Hepburn, who watched in awe as the artists from Pakistan created one-of-a-kind works of art on the hands of Brock students. 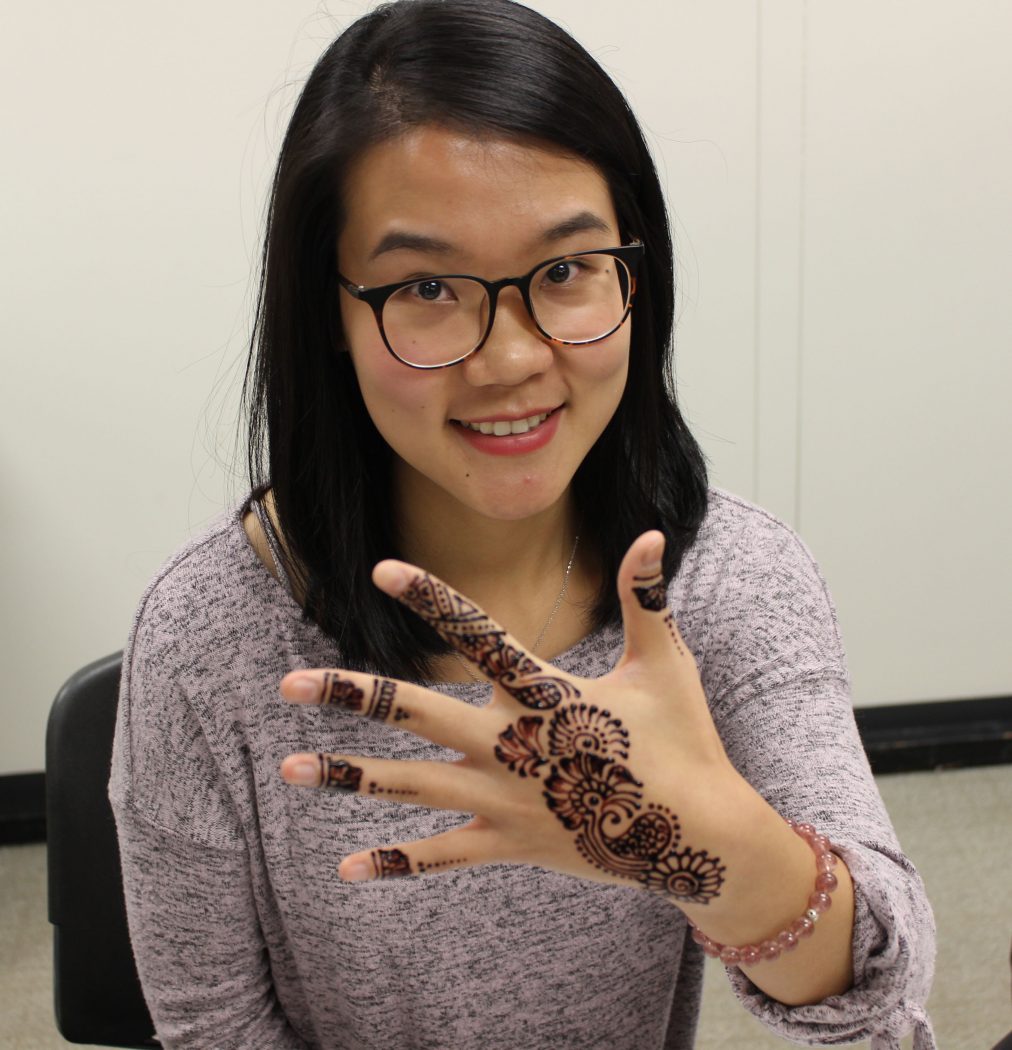 Also popular was the Nov. 10 opportunity to learn the martial art of Brazilian jiu-jitsu, which has been popularized by mixed martial arts organizations, such as the UFC.

Coaches Mauricio Yin Vieira, from Brazil, and Dylan Harten, from Canada, who recently formed the Brock Brazilian Jiu-Jitsu Club, transformed the Walker Complex dance studio into a dojo for the event.

With a range of experience levels in attendance, students were broken out into beginner and advanced groups to try a number of moves such as guards, mounts, escapes and submissions.

Third-year Business Administration student Tessa Meurs, from the Netherlands, called the demonstration a “good workout” that without the prompting of International Week, she may have never tried.

“It’s a great opportunity to try something new,” she said.

Throughout the week, the University community also voted for the winner of Brock International’s This is My Home photo contest. Five finalists were featured in an exhibition in Isaac’s Skybar Lounge throughout the week.

The winning photo, Ürümqi, China by Abuduwaili Weilati, which depicts the night skyline of the northwestern Chinese city, received almost half of the total votes.