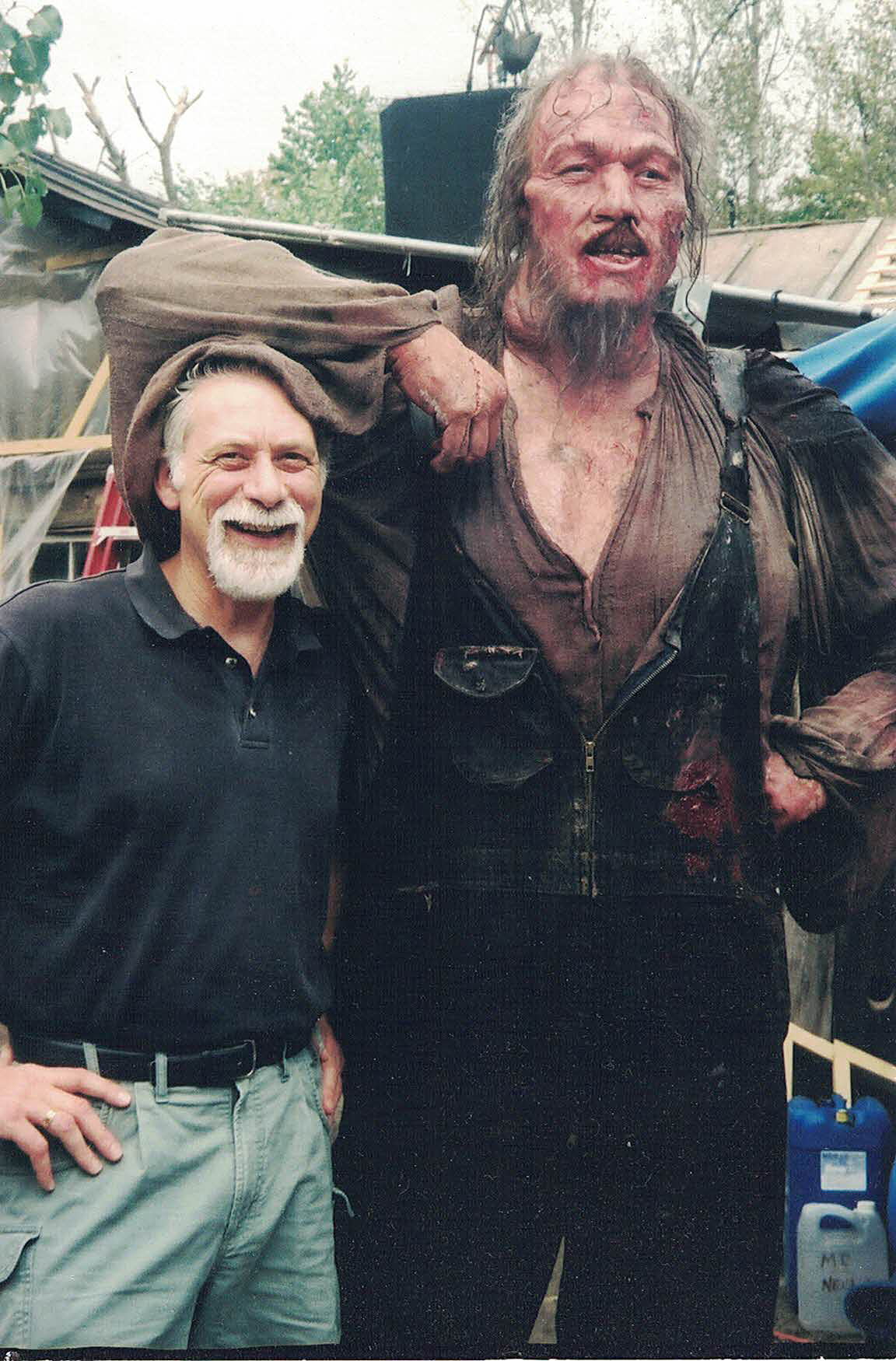 Brock University Professor Barry Grant on the set of the movie Wrong Turn with Saw-Tooth, played by the late Garry Robbins of St. Catharines.

As you dust off your Freddie Krueger claws or get your Frankenstein costume ready for Halloween, Brock University film expert Barry Grant is shedding some light on why we love — or love to hate — movie monsters.

In Monster Cinema, the 35th book written by the Communication, Popular Culture and Film professor, Grant examines the vast menagerie of monsters in the movies and describes how they help to define and affirm human civilization.

This is especially noticeable around Halloween, when people dress up like monsters to try and scare each other for the sake of amusement.

“Halloween allows us to become monsters by role playing,” says Grant. “Watching monster movies and donning a monster suit for a costume party are both socially sanctioned ways of expressing our inner demons and anxieties.”

Part of the Quick Takes series from Rutgers University Press, Monster Cinema is a small book that packs a big punch, examining human, natural and supernatural monsters in cinema, from crazed killers to malevolent trees to vampires.

“The classic monsters embody our timeless fears and anxieties, and are able to adapt to concerns of a given historical moment,” Grant says.

Grant is headed to the University of Wisconsin next week to speak at a conference celebrating the 200th anniversary of the publication of Mary Shelley’s Frankenstein. In his new book, the professor writes about a Frankenstein megatext — some 80 films based on the novel since 1910 and more than 200 films with Frankenstein in the title.

“The belief that ‘science is dangerous’ is as central to the horror movie as is the existence of supernatural creatures like werewolves,” Grant says. “Dr. Frankenstein stands as the archetypal mad scientist, a general figure of scientific hubris. Such a character can only be viewed as increasingly relevant given the pace of scientific advances in recent years.”

Indeed, monster movies often have a foot in two camps — horror and science fiction. People tend to think of sci-fi movies as having a premise involving science, and horror movies as involving something frightening, but Grant says it’s not that simple.

“Science fiction movies often present their science as horrifying, while horror films sometimes depict their monsters as sympathetic — more sympathetic than the humans.”

So why do we love monster movies so much?

“Bad special effects are fun because they are usually unintentionally bad. The sense of monstrous threat is dispelled when you can see the zipper on the creature’s suit,” Grant explains. “But if the effects succeed in convincing us when we see them, then it goes right to the core of the complex experience of monster narratives.

“We’ve all had the experience at some point of covering our eyes to avoid seeing something we thought too frightening in a horror movie, but then peeking through our fingers just a little anyway. We enjoy monster movies because they offer controlled thrills and we can temporarily suspend our disbelief.”

In spite of the vast array of monsters described in Grant’s book, his personal favourite monster movie is still Alfred Hitchcock’s Psycho.

“It established most of the elements of the modern horror film — a human monster, the monstrous hiding within the normal — in a masterfully constructed film.”

Monster Cinema will be available in bookstores this winter.