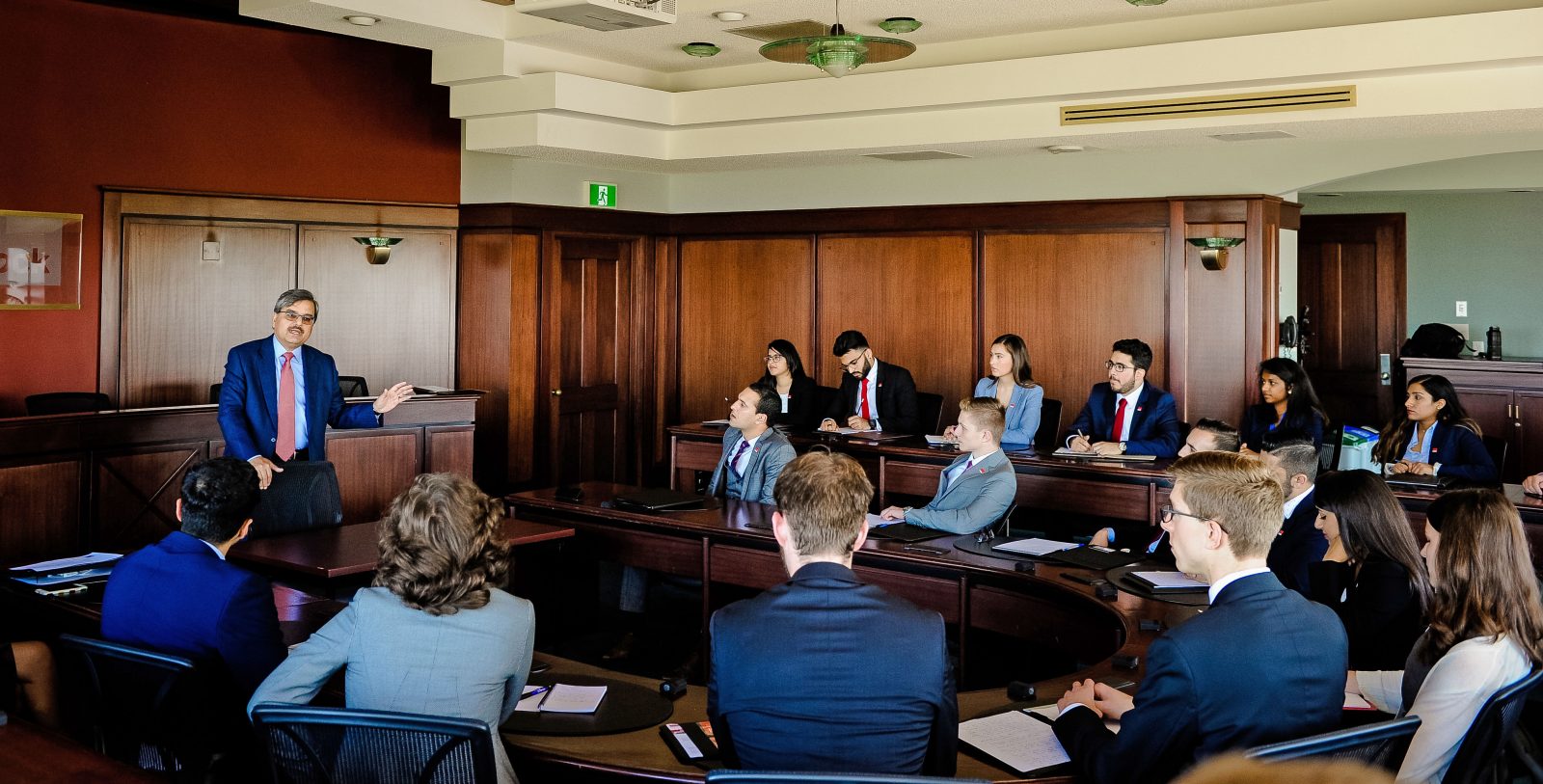 Deepak Chopra, President and CEO of Canada Post, speakers with a group of Goodman School of Business student leaders during his visit to campus on Thursday, Oct. 5.

Deepak Chopra came ready to deliver a wealth of business knowledge to a room of eager listeners.

The President and CEO of Canada Post was on campus Thursday, Oct. 5, to provide insight into the corporation and receive the 2017 Distinguished Leader award presented by Brock’s Goodman School of Business.

Now in its 10th year, the Distinguished Leader Series is a tradition that recognizes the achievements of several business leaders in a wide range of industries.

The leader of one of Canada’s most well-known brands and one of the country’s largest employers, Chopra has more than 25 years of global experience in the financial services, technology, logistics and e-commerce industries.

He spent a full day on campus and addressed a crowd of close to 300 members of the Brock community as part of the D.G. Willmot Leader Series, where he shared some of the wisdom he has gathered throughout his career in business.

“It’s an amazing honour to be recognized in the company of the past distinguished leaders,” Chopra said before beginning his address. “To be in the company of those great leaders as the head postman is quite an honour and I am absolutely thrilled to accept that.”

Although Chopra traced Canada Post’s history back to 1763 when the Treaty of Paris was signed, a time when the mail network included three horses travelling between three main cities, he said the organization is no longer “your grandmother’s Canada Post.”

Drawing from humble beginnings, Canada Post is now an $8-billion business that has 65,000 employees, 6,300 retail outlets and 16,000 trucks, and covers 16 million addresses from coast to coast.

“We go up and down to the moon twice a day. The amount of travel in walking, driving and flying we do every day is going to the moon twice,” Chopra said in an effort to put the workload into perspective.

He took the helm of the corporation in 2011, a year that proved to be pivotal in the mail business.

“Mail was declining at a pretty sharp rate,” Chopra recalled. “If we did not transform the business, we would have lost $1 billion a year.”

With e-commerce in its infancy and macro trends pointing to a jump in online shopping, Chopra recognized it as an opportunity, but the business was not there yet.

“We decided that if the market doesn’t exist, we will create it,” he said, explaining that in 2012, his team introduced the Canada Post E-commerce Innovation Awards to identify and recognize seven small startups that were trying to succeed in the e-commerce field. These included Well.ca and Rent Frock Repeat, which have since grown to become multimillion dollar companies.

“We not only invested in the startups and the dreams that these entrepreneurs had, we wanted to create the urgency for larger retailers that were way behind,” Chopra said.

“When the market didn’t exist, we created these early shoots, these early success stories. If we had sat back and waited for the opportunity to come to us, we would have waited a long time.”

Chopra’s next challenge was to affect change on the culture within Canada Post.

“How do you change the culture, how do you drive the passion to succeed, when a lot of people, even today, still have the impression that this is your grandmother’s Canada Post?” he questioned.

In Chopra’s mind, he faced two opposite ends of an innovation continuum: he could outsource innovation to an external innovation hub or he could reinvent the core of the business.

He decided to harness the knowledge and experience of his employees to build innovative solutions from inside the company. Through the development of a mobile app, delivery solutions like FlexDelivery, drive-thru parcel pickup locations, and a return-friendly fitting room for trying on online purchases, Chopra led his team to redefining Canada Post’s core business to be relevant in a digital age.

“You wouldn’t expect that from your grandmother’s post office,” he said.

Chopra’s story of having the courage to redefine a failing business model at a crucial time in the industry is one of tenacity — one that required a clear vision and an effective and innovative leader who could look ahead to identify a profitable opportunity.

“We are now at a stage where we are growing. We’re profitable. We became Canada’s No. 1 parcel company two years ago and we will maintain that spot. We were left for dead six years ago,” he said.

“I’m so blessed and lucky to be part of that journey where we were able to redefine the business that has national implications and hopefully we will create another generation of people who will be inspired.”