Grandpa and grandson are so close, they graduated together at Brock convocation 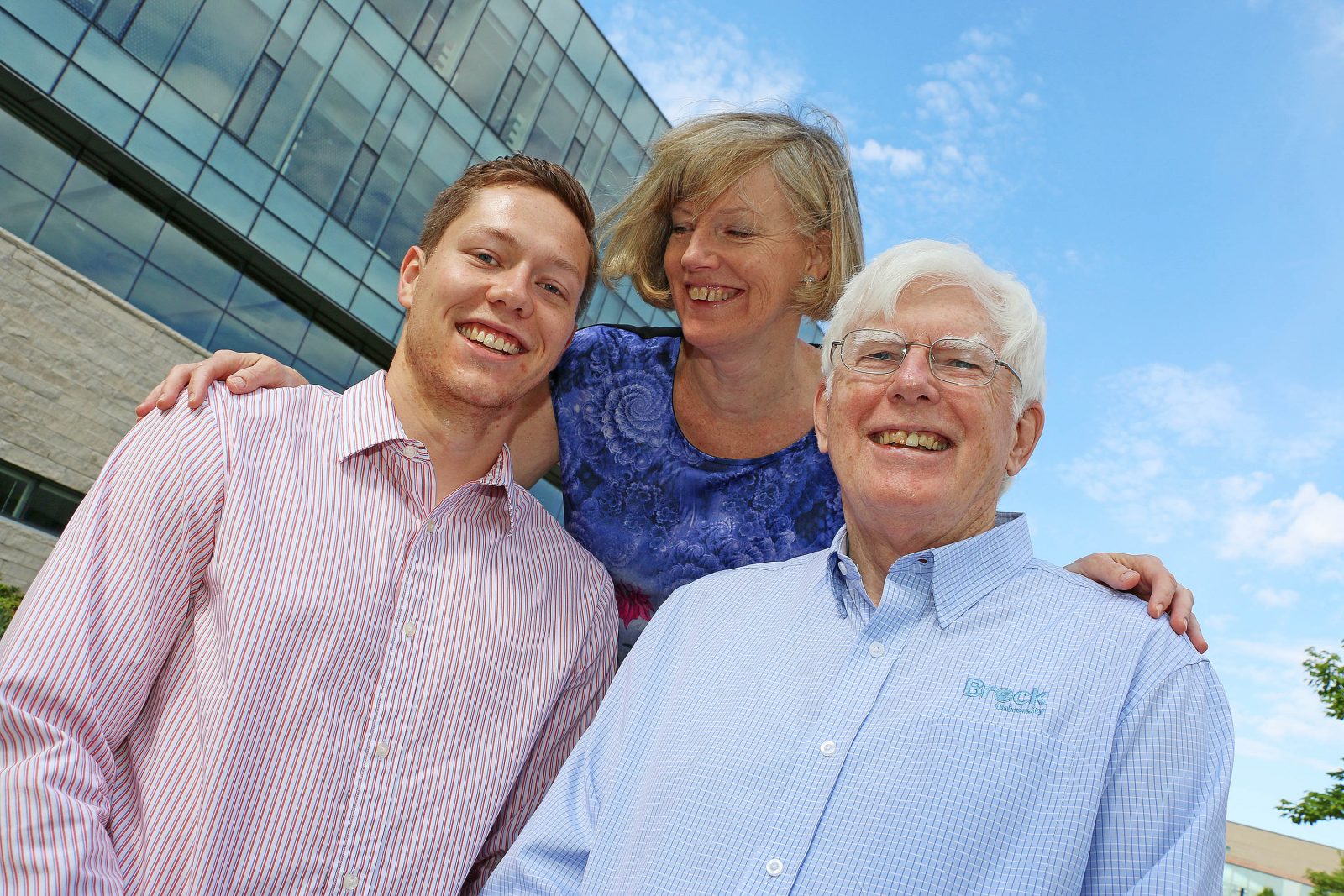 Jonah Mondloch, left, graduated from Brock University Wednesday alongside his grandfather Charles Burke. Cathy Mondloch, centre, a professor at Brock, hooded her loved ones during the Convocation ceremony.

When he was eight years old, Jonah Mondloch walked into the library at Brock University with his grandfather Charles Burke to help him find some research books.

This week — a decade and a half later — Jonah again walked through the University with his grandfather, but this time they had both just become Brock graduates.

On Wednesday afternoon, Jonah, 22, and Charles, 78, graduated together in the Spring Convocation ceremony for the Faculty of Applied Health Sciences. Jonah completed his degree in Kinesiology in five years. His grandfather had been taking classes part time, one credit at a time for 15 years, but doubled up his course load this year so he could finish his degree in time to graduate with Jonah.

“I was just taking courses for fun,” said Charles, “but as we got closer and closer, it became clear that we could graduate together.” 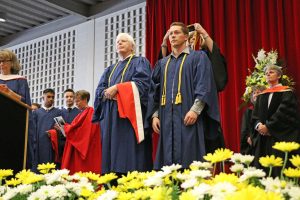 Jonah Mondloch, right, is hooded by his mother, Brock Prof. Cathy Mondloch, while his grandfather, Charles Burke, awaits his turn.

There were many friends and family members in the Convocation crowd, but none closer than Brock Psychology Professor Cathy Mondloch — Jonah’s mother and Charles’ daughter —who was on stage and beamed as she placed the graduation hoods over her loved ones’ heads.

“I’ve been looking forward to it for a long time,” said Mondloch, who started teaching at Brock in 2004, not long after her dad enrolled in classes. “To see both of them on stage, and to be up there with them and part of that, is really unique.”

Mondloch described Jonah and Charles as good friends who share a love of baseball, golf and other sports.

The pair actually took three classes together over the years — including one in Jonah’s first year, when he was too embarrassed to sit next to his grandfather.

“He sat on the left side and I sat on the right,” Charles said with a laugh.

“I had friends from high school in that class, so we all sat together,” said Jonah, whose Brock experience has included being on the varsity Badgers curling team.

That embarrassment, however, was quickly replaced by collaboration and friendly competition. In one shared class they did a joint presentation together, and they often compared grades against each other.

“I remember going to his house for dinner one day. I walked in and he was wearing a cardboard sign around his neck with a big 89 on it, because he had beaten me on an assignment or an exam,” Jonah said, admitting his grandfather beat his final mark in two out of the three classes they took together. 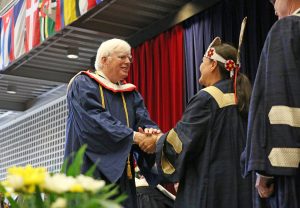 “There’s a good chance I may not have got a degree if Jonah wasn’t here,” said Charles, a retired accountant who still serves as Director of Finance for the United Way of St. Catharines. “I was just doing it for fun. I think when Jonah came here, there was an incentive to go to school.”

The grandson said graduating together is something precious that he will never forget.

“It makes it very unique,” said Jonah, whose middle name is Charles after his grandfather. “So many people graduate university these days, so being able to graduate with my grandpa will make it a more memorable experience.”

Meantime, Prof. Mondloch also had occasion to teach her father in two courses over the years, and says he was a good student.

“The whole thing has been an interesting journey,” said the proud mother/daughter. “It has been a lot of fun.”