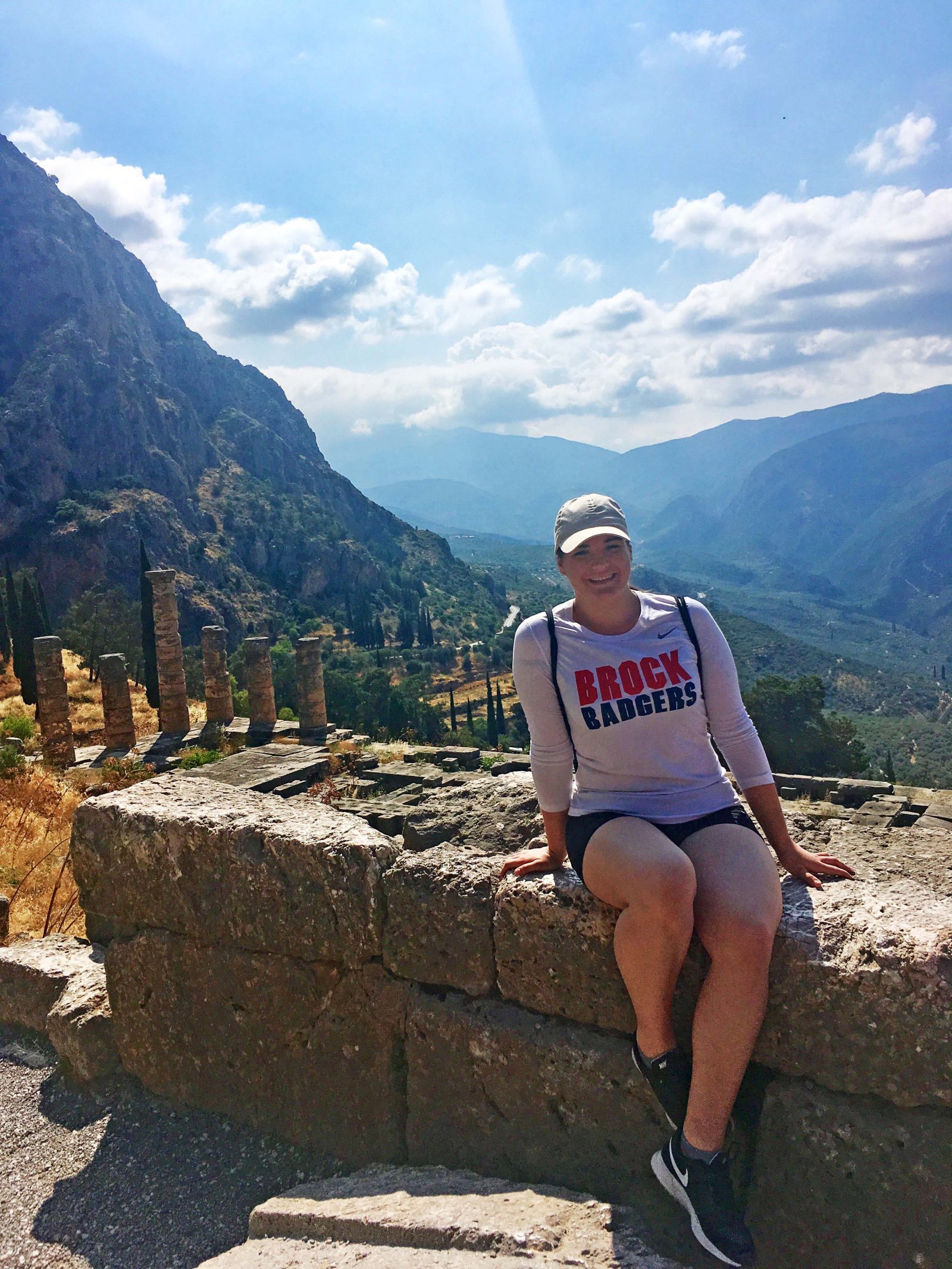 Shealin Murray wears her Brock Badger pride at Delphi. The site was home to an ancient oracle of the Greek god Apollo and is a UNESCO World Heritage Site due to its influence and importance in the ancient Mediterranean world.

A group of Brock students recently found themselves surrounded by the landscapes described in their textbooks during their own odyssey in Greece.

The Classics class, led by Professor Allison Glazebrook, returned to campus this week after spending two weeks experiencing the monuments, artifacts and architecture of Greece

Exploring ancient sites and seeing artifacts in person is meant to add a depth to learning not otherwise possible in the classroom.

It allows students to put the archaeology of Greece in a much wider context, including how the sites have been changed through history and how they are experienced by modern tourists.

“The old and the new exist side by side here in Greece,” said student Sarah Murray. “The past runs into the present in a state that must struggle to meet the needs of its living citizens while preserving the legacy of its ancestors.”

Prior to travelling overseas, the students had two weeks of class at Brock, during which they researched specific artifacts.

“It prepared me for looking at artifacts with an analytical eye instead of with touristic excitement only,” said third-year Classics student Keegan Bruce, who found the research helpful.

Each student was responsible for presenting a site on the study tour.

“Viewing monuments and works of art first hand is more engaging than reading about them in a textbook,” Glazebrook said. “You can examine all angles of an artifact and have many other examples to compare it to.”

For Bruce, the trip provided a “much better understanding of how the pieces of art worked in space,” she said. “For example, I was never impressed by the chariot rider bronze in photos, but seeing it in the National Museum struck me dumb. The tension, movement and detail of the piece was overwhelming and can’t be taken from a photograph.”

Travelling as a university group allowed students to visit archaeological sites and facilities not always accessible to the general public, such as the Malcolm H. Wiener Laboratory for Archaeological Science in Athens. Students were given a tour of the lab, where they learned about research projects focused on human osteology, faunal analysis, organic residue, and various soil, stone, ceramic, cement and plant materials.

“Travelling across the landscape drove home why ancient Greece developed as it did,” Glazebrook said. “Climbing up Mount Lykaion to view the sanctuary of Zeus really tested our limits, but was one of the more memorable experiences.”

Students recorded their experience before and during the tour on a class blog.

The course also incorporated social media, with students choosing the hashtag #brockodyssey2017 and taking over the Faculty Instagram and Facebook accounts.

Brock’s Department of Classics is the only one in Canada to offer credit for annual study trips to the Mediterranean. The trips alternate between a study tour and an archaeological dig.

The students’ Brock University Archaeological Society and the Classics department offer bursaries to help offset the cost of travelling overseas.

Students interested in future study tours should talk to their academic advisor. The course is open to students from any major, although there is an application process.