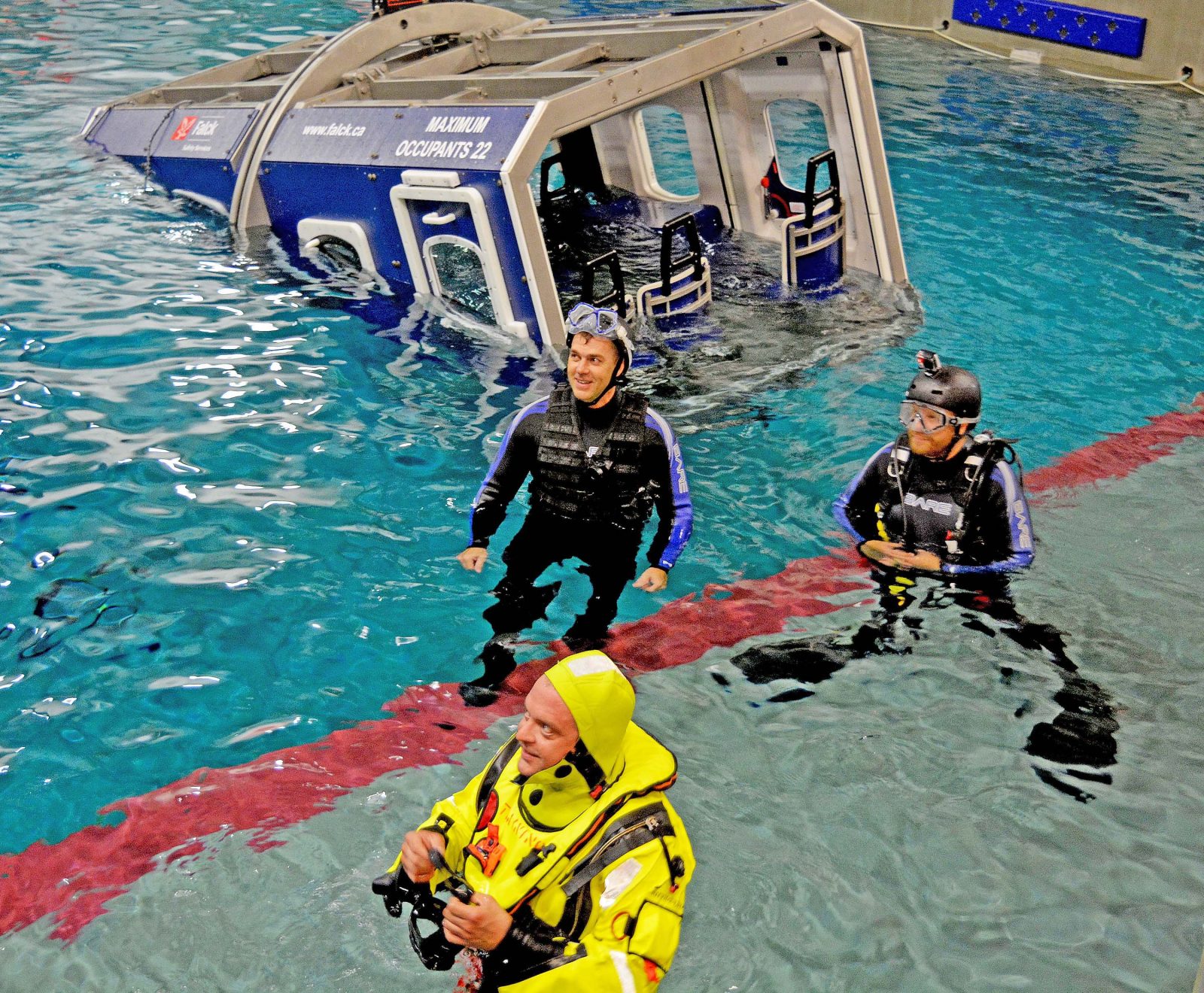 Imagine you are a crew member on a nighttime Atlantic coastal flight. Suddenly, an hour and a half after takeoff, unexpected weather conditions cause your fixed-wing aircraft to drop altitude.

For 17 harrowing minutes, the plane flies without power, gliding and descending for 88 kilometres before crashing into the sea. Your five-person crew’s only chance for escape is through a single door in the already submerged aircraft.

This is among the real life scenarios trainees consider when learning how to survive an offshore crash.

Mike Taber, who completed an Ontario Ministry of Research and Innovation Post-Doctoral Fellowship in 2013 and currently holds an Adjunct Professor position in the Faculty of Applied Health Sciences at Brock University, is dedicated to improving survival in emergency situations.

With a military background, as an aviation technician for the Royal Canadian Air Force, Taber (PhD ‘11) became interested in underwater survival after he started training as a ship’s team diver for rescue operations.

The newfound passion was a turning point in Taber’s career, causing him to start thinking about ways to survive a helicopter crash at sea.

Taber, who splits his time between Niagara, Halifax, N.S., and Mount Pearl, N.L., has since provided lifesaving aviation and marine survival training to civilian, military and Special Forces personnel in more than six countries.

“It may seem like I work in a field of doom and gloom, but I’m really in the business of preparedness. With the correct training and knowledge, individuals can significantly increase their chances of survival,” he says.

“Through our technology, Falck provides trainees with an experience that simulates what it is like after their aircraft has impacted the water and becomes submerged,” Taber says. “For example, based on the research we have carried out in our Helicopter Underwater Egress Training program, we can show people how to make a safe exit upside down, in the dark and in turbulent conditions.”

Other aspects of the complex survival training include preparing individuals to equip themselves with the appropriate survival gear, such as the use of life rafts, immersion suits, lifejackets and purpose-built evacuation equipment.

“Falck’s training program has proven to be successful on numerous occasions. We’ve had people who were involved in a crash landing into water come back to us afterwards to talk about how the process helped them successfully manage the emergency. We have had individuals escape in complete darkness, in cold water and after being injured during impact,” he says.

From the moment a flight crew realizes there is an emergency to the moment of impact, there are a number of factors that can influence how pilots, navigators and other crew members respond.

As part of Taber’s approach to survival, aspects of his research focus on pre-impact variables such as what a person does in the hours before a flight that influences their ability to respond to an emergency as it is happening.

Through his St. Catharines-based N2M Consulting Company, Taber and his team are working on five projects with CAE — a global leader in modelling, simulation and training for civil aviation and defence.

By examining everything from training methodologies to gaze tracking and cortisol, the projects explore how the unique set of factors present in Atlantic Canada influence offshore helicopter transportation.

For example, Taber notes the concept of fight, flight or freeze suggests that “when a firefighter is in a fire situation, the expected response would be to fight, but when faced with an in-flight emergency in a cockpit, the same person may freeze because it is an unusual situation for which there is no pre-planned action.”

“My research takes into consideration how elements such as hydration, caffeine and caloric intake, sleep, heat exposure and the flight deck environment can impact the physiological and psychological responses required to handle a crisis,” Taber says.

Other industry-supported research projects explore aspects of survival task performance in dark conditions, as well as training techniques needed to ensure people can remember what they need to do in an emergency.

“We have been looking at how influences such as darkness or various simulated sea conditions can impact a person’s ability for survival training recall,” says Taber.

Not only does Taber’s applied research help the Falck team modify and improve upon the training they offer to help ensure survival, but it has also helped set new standards of training for both military and offshore safety-based training in Canada.

When reflecting on the time he spent at Brock as a Post-Doctoral Fellow, Taber believes his experience has helped equip him for what he is doing now.

“While at Brock, I was involved with an extremely large project with multiple people from academia and government, so managing all of the moving parts, as well as the different personalities, has proven to be tremendously helpful in my daily life,” he says.

“Additionally, the beneficial survival performance data that emerged provided a solid foundation for project management in applied research which has allowed me to pursue my passion of industry-based research.”

Ultimately, Taber’s goal is to help improve the likelihood of surviving an emergency.

“When trained people don’t survive an emergency, it is very difficult because we feel like we didn’t train them enough. Ideally, every one of our trainees would survive, but at the end of the day even if only one person survives, it’s all worth it.”

For an in-depth look at the issues and concerns facing offshore helicopter transport, Mike Taber has authored the Handbook of Offshore Helicopter Transport Safety: Essentials of Underwater Egress and Survival.