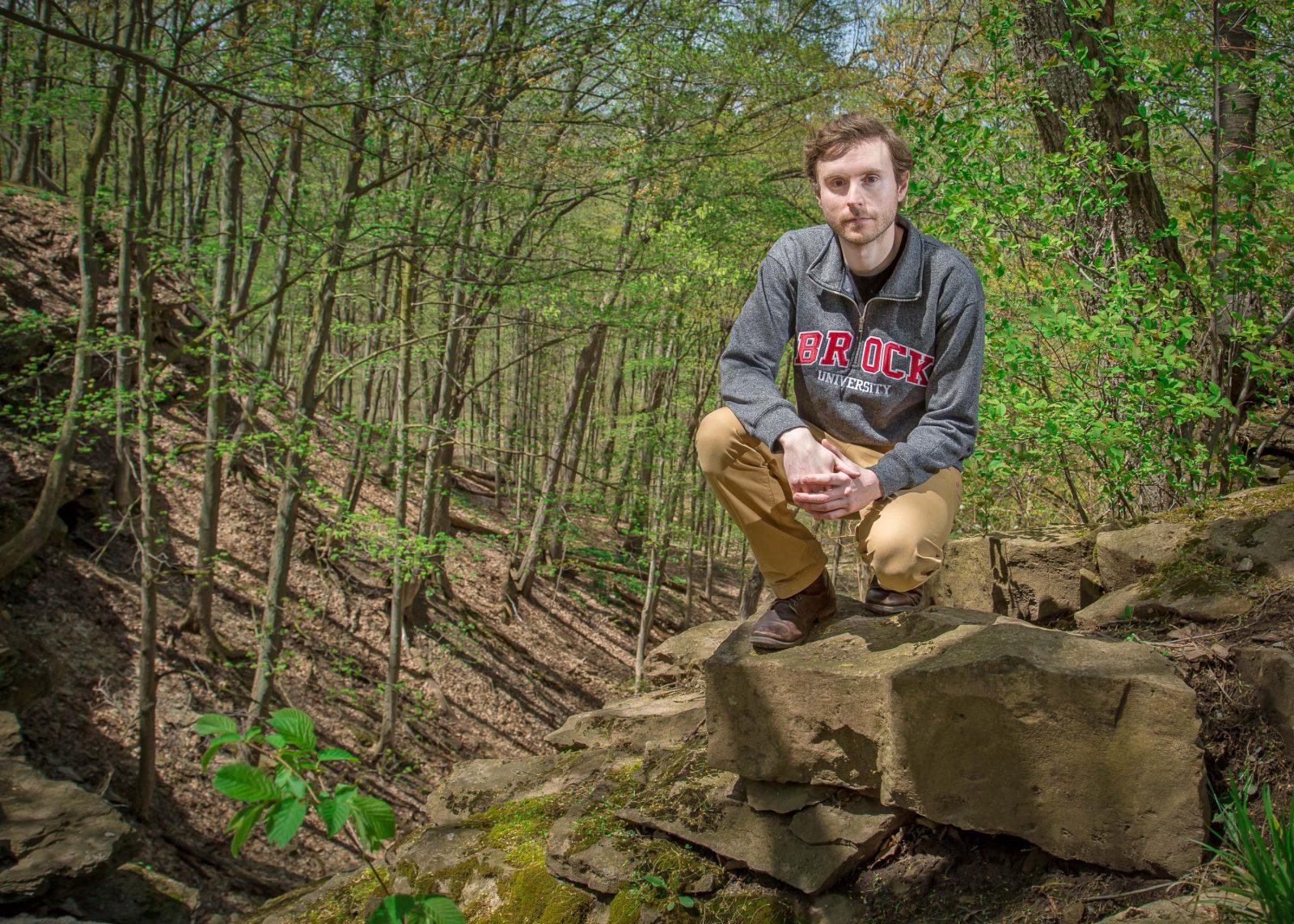 Brock alumnus Adam Shoalts (BA '09) left in mid-May to embark on a five-month trek across the Canadian Arctic.

As modern-day voyageur Adam Shoalts (BA ’09) ventures to the Arctic this spring on an amazing one-man expedition, he’s doing so with signature red Brock gear that’s sure to stand out against the tundra.

In mid-May, the 31-year-old Pelham native departed his home in Sudbury, intent on honouring the country he loves dearly with an epic adventure.

To commemorate Canada’s 150th birthday, Shoalts plans to spend five months walking and canoeing thousands of kilometres across the Yukon, Northwest Territories and Nunavut. And as he traverses the great northern landscape, following a route from the Alaska border to Hudson’s Bay, he’ll be warmed — literally — by reminders from his alma mater.

Brock University is a co-sponsor of Shoalts’ exhibition, contributing lightweight, quick-dry outerwear to help during his Ulyssean excursion through forest, muskeg and tundra. 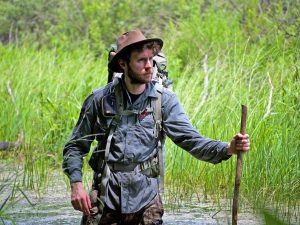 Adam Shoalts (BA ’09) will traverse diverse landscapes during his 4,000-kilometre trek across the Arctic that began this spring. (Photo credit: Alexia Wiatr)

While dreaming up trip possibilities to mark Canada’s milestone birthday, Shoalts began researching a canoeing trek that took teams of travellers from Vancouver to Halifax in 1967 in celebration of the country’s first 100 years.

Recreating that journey was appealing, but Canada has changed a lot in 50 years, and today that original ’67 path would basically bring him to a Tim Hortons every third day. The intrusion of civilization and pop culture were not in his game plan.

“To up the ante and keep the route in the wilderness, I figured I’d take it to a new extreme and do it across the Arctic,” he said in the days leading up to his sendoff.

Shoalts hopes the expedition will encourage Canadians to “think more about the country’s northern wilderness and what kind of future it might have over the next 150 years.”

Few people realize the “incredibly diverse” landscapes the country’s remote north has to offer, he said, with most envisioning a land filled with ice, snow and little else.

With a route that, by necessity, is mainly upstream, the adventurer will brave the elements, experiencing temperatures expected to fluctuate from -15 C to 25 C.

“I’ll be travelling at a pretty frantic pace, so there won’t be much time to dwell on anything — this is a race against the seasons,” he said.

“My biggest concern is ice conditions and adverse winds. Those are two major factors outside my control that could prevent me from reaching my goal.”

As a self-proclaimed fan of taking the road less travelled, the Brock alumnus left the comforts of home both prepared and excited for the challenge ahead, as well as thankful for those who have stood behind his dreams of exploration.

“To have the support of my old University means a lot,” Shoalts said.

“Some people may think, ‘4,000 kilometres alone across the Arctic? That’s crazy!’ so to have Brock step up and give me a vote of confidence in what I’m doing is very welcome.”

Shoalts said he’s thrilled to be able to “show a bit of school pride” throughout his journey in hopes of inspiring the next generation of Brock students to chase their dreams, “no matter how unlikely they might seem.”

When thinking back to his time on campus, Shoalts’ mind naturally drifts to the University’s Map, Data and GIS Library.

“I’d have to thank the map library and the excellent map librarians there, who may not remember me, but were always extremely patient and helpful when I would come in to pore over topographic maps when planning expeditions,” he said.

Shoalts continues to apply those skills, doing extensive research while planning his travel routes, studying satellite imagery and maps closely to commit as much to memory as possible.

“That saves time in the field and encourages a deeper connection to the land,” he said.

He will be travelling as light as possible, with only the bare essentials strapped to his back and contained within his 15-foot solo prospector canoe.

In addition to his expedition backpack, he’ll have two watertight plastic barrels crammed with food rations, camera equipment and other gear.

“Minus the 53-pound canoe, my gear weighs around 75 pounds,” he said, “not counting, when fully replenished, around 100 pounds of food rations, which diminishes with each day until I reach one of my re-supply points.”

Also within his pack are a few good books, that, along with the wildlife he’s likely to encounter, are sure to keep him company.

Shoalts found his love for reading and learning was nurtured during his time at Brock.

“I really soaked up the atmosphere; listening to lectures, engaging in seminar discussions and, my favourite, just wandering the library and perusing the shelves almost at random for books that interest me,” he said.

Although he felt the bookish behaviour “might sound strange coming from someone who does extreme adventure,” Shoalts thinks the academic grounding he received at the University “helped me to bring things into sharper focus, and strike the right balance on my journeys between adventure and research.”

Once Shoalts returns to Ontario in late September or early October, he intends to share tales of his expedition through various Brock speaking engagements.

“Hopefully I can help inspire others in the Brock community to chase their dreams by letting them see that I started in the same place — from an undergad sitting in a Brock lecture hall to alone in a canoe traversing Canada’s Arctic,” he said.

“If I can do that, anyone can achieve their dreams.”

Shoalts, a Fellow of the Royal Canadian Geographical Society, has written two books and published more than 100 articles on various subjects related to exploration and the environment.

He was honoured in March with the young author’s Speaker’s Book Award from Ontario legislature Speaker Dave Levac.

He was recognized for his latest book, Alone Against the North, An Expedition into the Unknown, which details his 2012 expedition to Hudson Bay Lowlands, where he canoed along the uncharted waters of the Again River.

Receiving the award was a “welcome surprise,” Shoalts said. “I was happy just to make the shortlist. To actually win was such an honour.” 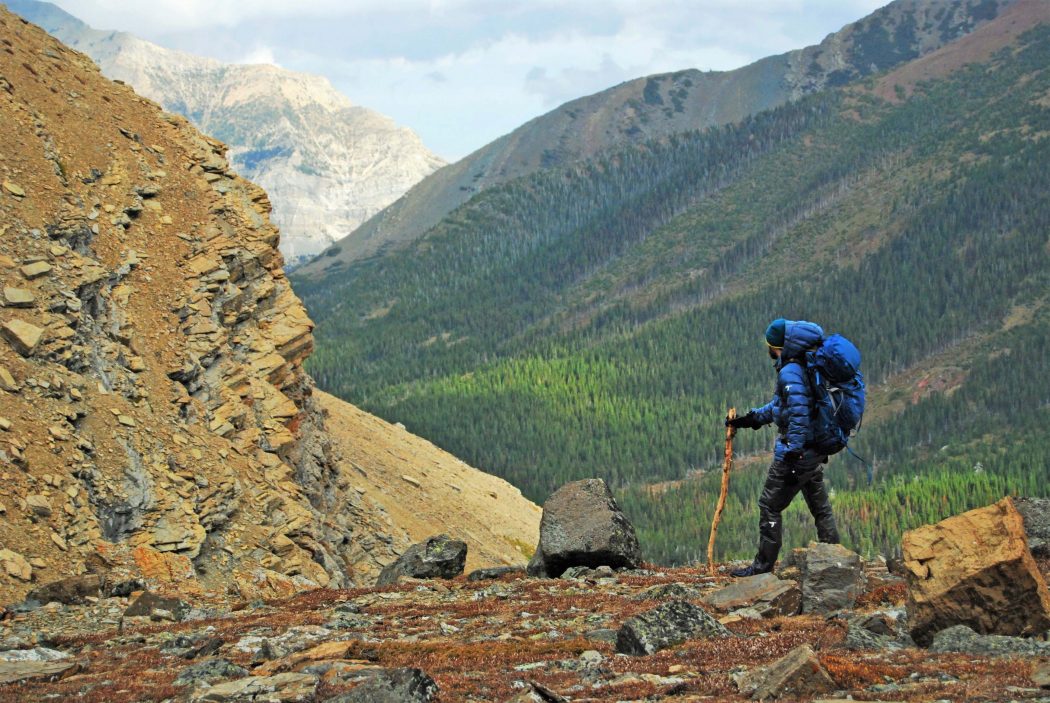 Adam Shoalts (BA ’09) will traverse diverse landscapes during his 4,000-kilometre trek across the Arctic that began this spring. (Photo credit: Alexia Wiatr)