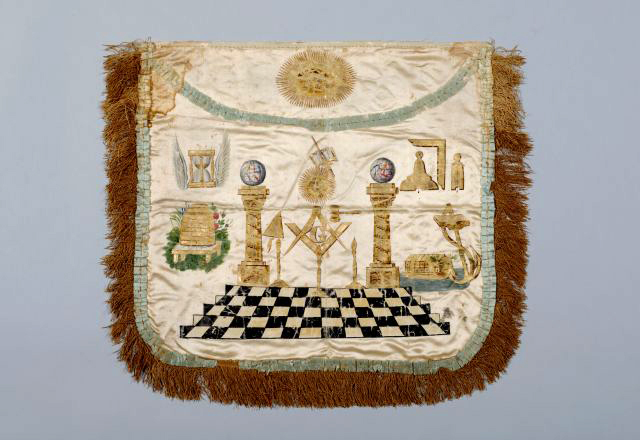 Ceremonial aprons of the Freemasons will be at the heart of the discussion led by American scholar Amie Newell at Brock University’s eighth annual Charles A. Sankey Lecture on Sunday.

Ceremonial attire of the Freemasons will be at the heart of the discussion led by American scholar Aimee Newell at Brock University’s eighth annual Charles A. Sankey Lecture on Sunday, March 26.

In her talk entitled “The Badge of a Freemason: New Stories from Old Aprons,” Newell will explore clues of Masonic culture derived from the ceremonial clothing.

Newell is the former director of collections at the Scottish Rite Masonic Museum and Library in Lexington, Mass., where she was responsible for a collection of 17,000 pieces, including Masonic and fraternal artifacts and American decorative arts.

Now the executive director for the Luzeme County Historical Society in Wilkes-Barre, Pa., Newell has published several books, including Curiosities of the Craft: Treasures from the Grand Lodge of Massachusetts Collections (2013) and her most recent work, The Badge of a Freemason: Masonic Aprons from the Scottish Rite Masonic Museum & Library (2015).

More than 400 guests are expected to attend Sunday’s lecture, held in Sean O’Sullivan Theatre from 3 to 5:30 p.m. The event is hosted by the Department of History in co-operation with the Grand Lodge of Canada in the Province of Ontario.

“It’s the biggest event the history department organizes every year,” Associate Professor Michael Driedger said of the lecture, which draws people from across Ontario and New York state.

The signature event is held annually in part to draw attention to the special collection of Masonic history, including a variety of rare books and documents, donated to Brock from Charles Sankey’s personal library.

Sankey was a Freemason and a historian of Freemasonry.

His library has been used by the Ontario Freemasons as the basis for building a larger historic collection.

“Freemasons sometimes have the reputation of being a mysterious secret society, but they like to think of themselves as a society without any secrets,” Driedger said.

In recent years, Masonic history has become more accessible to the public, with Freemason libraries and archives across North America and Europe opening their doors.

Speakers selected for the Sankey Lecture are asked to make their research accessible to and understandable for a broad audience in order to create greater outreach, Driedger said.

In an effort to further introduce students to Brock’s special Masonic collection, a new third-year history course, Fraternalism and the Freemasons, was launched in January.

The lecture is open to the public and all are welcome to attend.

More information on the recently launched history course is available in a recent Brock News article.