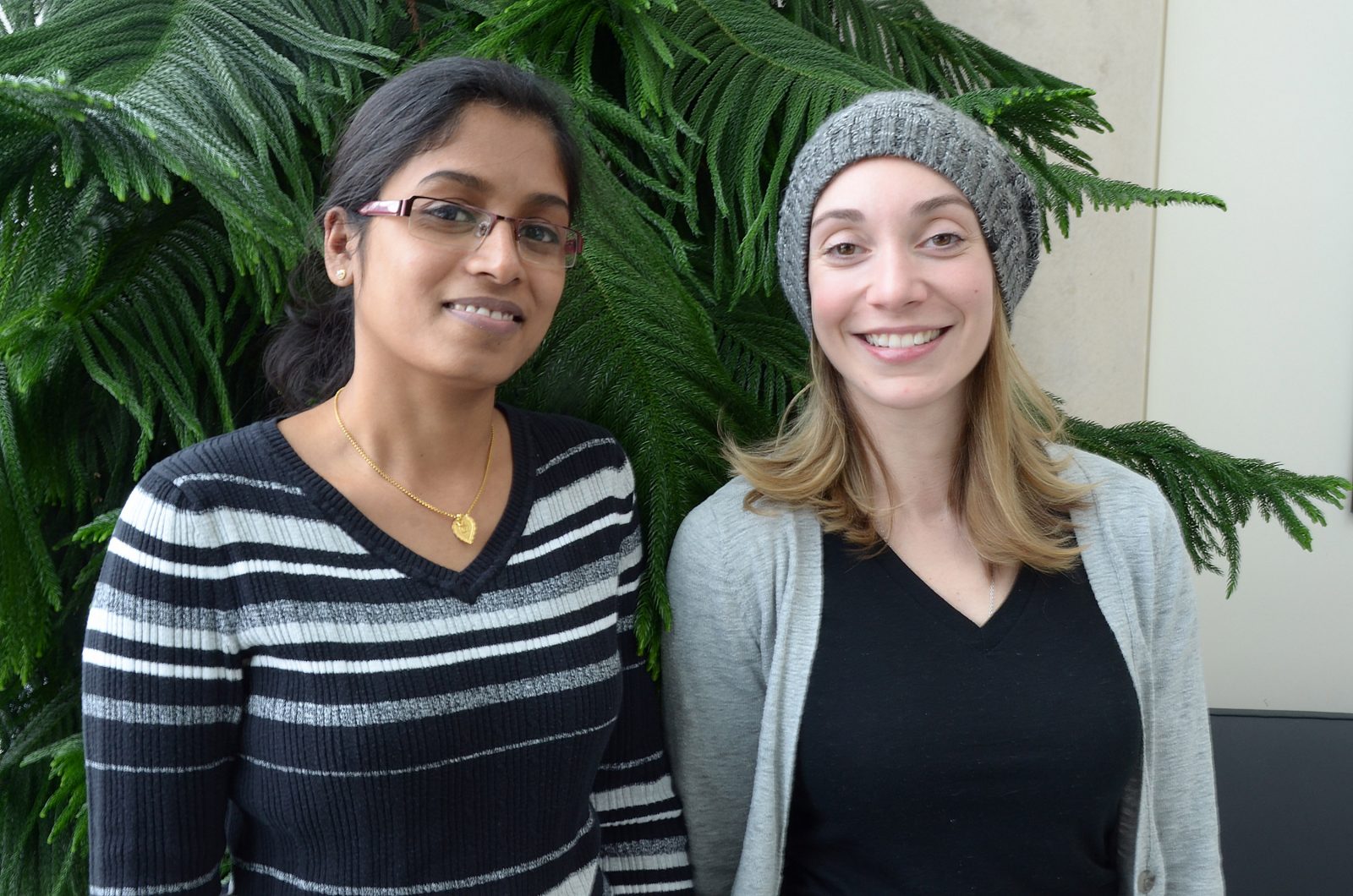 Soumya Moonjely and Larissa Barelli, both PhD students in the Department of Biological Sciences, are part of a team studying how a particular type of fungus interacts with plants. Barelli created a video about the research that has made the Top 40 in the NSERC Science, Action! competition.

It’s a prospect that excites student researcher Larissa Barelli: a fertilizer manufactured by Mother Nature herself, free from the conventional human-made chemicals that pollute the environment.

She and her colleague Soumya Moonjely, both PhD students in the Department of Biological Sciences, are part of a team whose research is bringing that vision a step closer to reality.

The researchers are studying how a particular type of fungus interacts with plants.

The team made some fascinating discoveries: that the Metarhizium fungus kills bugs and transfers nitrogen contained within those bugs to the roots of plants.

Recently, the team found that this nitrogen-supplying fungus is even more efficient because it can receive energy from the plants, making their relationship self-sustaining and an ideal fertilizer.

“In future, you will likely be able to replace the chemical stuff with just doing multiple applications of the fungus near the plant,” Barelli said.

This fungus can help plants in several ways. It can accelerate plant growth, help plants to beat other pathogenic microbes and can also support plants during environmental stress.

The mechanics of the process is explained in a 60-second video — Insects, a Dinner for Two — Barelli submitted to the NSERC (Natural Sciences and Engineering Research Council of Canada) Science, Action! Competition.

Barelli’s entry, along with three others submitted by Brock students, made it into the Top 40 in the national student research contest and is in the race to make the finals.

The fungus’ dual function of killing insects and transferring nitrogen to plants has tremendous implications for agriculture, Barelli said.

“Locusts, depending on the size of swarms, can wipe out entire fields of crops such as rice, corn and wheat,” she said.

“If we can introduce a fungus in the soil— at a ecosystem level — we can infect the insect larvae before they develop into adults and reduce numbers significantly.”

At the same time, the fungus can “provide the plant access to soil-limited resources and help plants tolerate abiotic stress, such as salinity,” Barelli said. “The bottom line is that it promotes plant health.”

Jens Coorssen, Dean of Graduate Studies, expressed his excitement that “four of our extremely talented graduate students have been selected as part of the Top 40.

“These students are making great strides in their fields of study and we are honoured to have them representing research at Brock,” he said.

“I would encourage everyone in our campus, local communities and beyond to support these student researchers by watching their videos and sharing them with others.”

The 15 competition finalists will be announced no later than April 5.

Editor’s Note: This is the second in a series of four stories profiling the four Brock University students in the running to win the NSERC (Natural Sciences and Engineering Research Council of Canada) Science, Action! competition. All four videos are available for viewing on a recent article published in The Brock News.