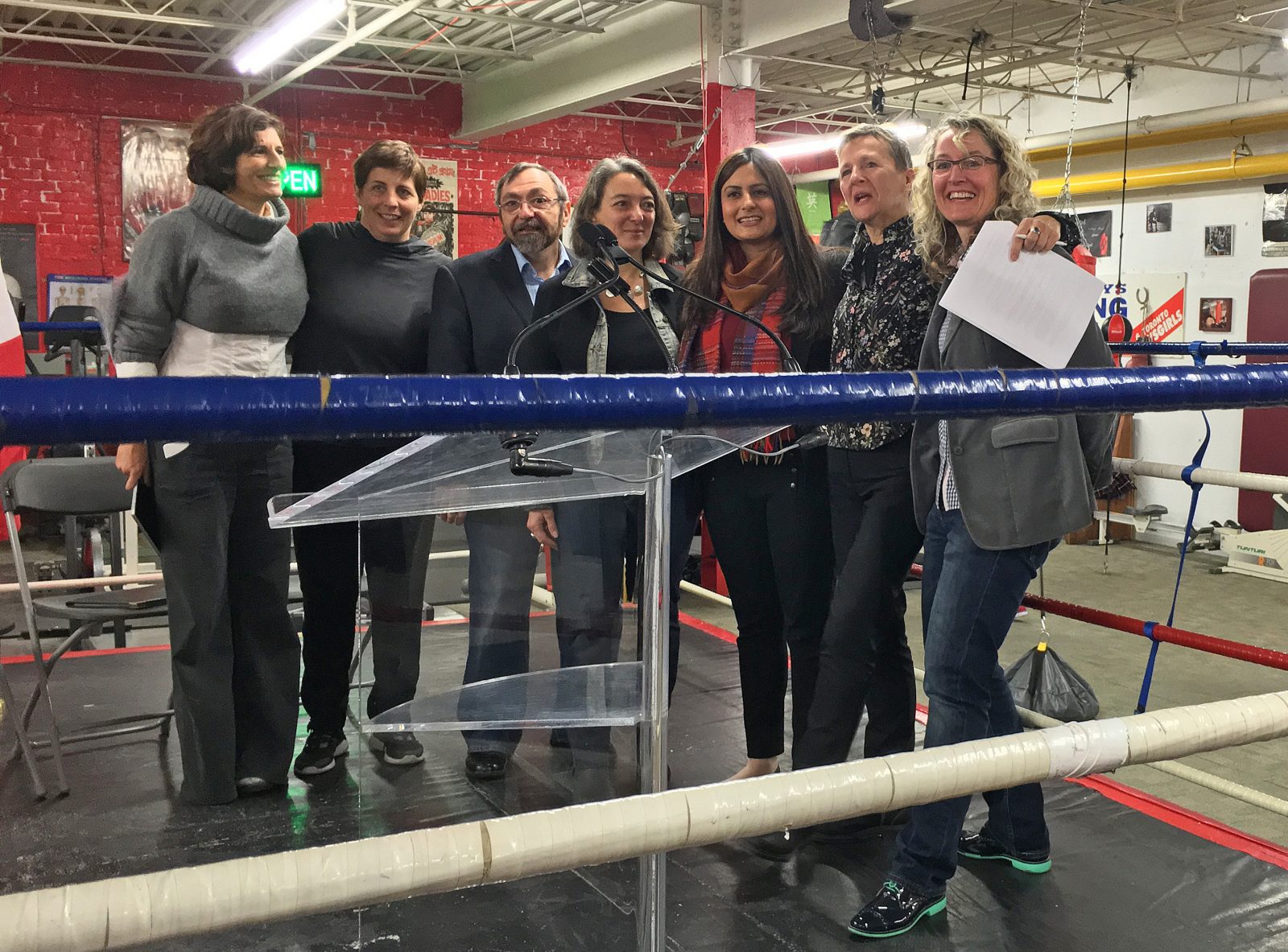 The Public Health Agency of Canada granted Brock Professor Cathy van Ingen and Department of Kinesiology associate professor Kimberley Gammage $420,536 to evaluate the effectiveness of the Shape Your Life program. The funding was officially announced in Toronto Friday, Nov. 25.

Tania Jivraj had just given birth. Having experienced violence in her past, she was overwhelmed with postpartum depression and wondering just how she was going to make it as a new mother.

“I felt quite unskilled,” she recalls. “I didn’t feel I could maneuver the world in a healthy, safe way, I didn’t actually know what to do; I had no idea what direction to go into.”

Luckily, Jivraj was a volunteer board member of the women’s support organization Opportunity for Advancement. Executive director Joanne Green encouraged her to be a participant in the first group of a pilot project called “Shape Your Life.”

A decade later, Shape Your Life has helped empower more than 1,200 women and trans survivors of violence through a free recreational boxing program at a gym in Toronto.

On Friday, Nov. 25, the Public Health Agency of Canada announced it was funding the research of Shape Your Life co-founder and Brock University researcher Cathy van Ingen, along with Department of Kinesiology associate professor Kimberley Gammage more than $420,000 to evaluate the effectiveness of the Shape Your Life program.

“While there is significant evidence from participants of Shape Your Life that this program is valuable to them, this study will allow us to provide further evidence of its benefits, with a focus on the positive outcomes of Shape Your Life – including a greater sense of control and better feelings about the self,” says Gammage.

With the three-year Public Health Agency of Canada grant, van Ingen and Gammage will be able to measure the program’s impact on 225 participants’ self-esteem, resilience, PTSD, social supports and other areas of their lives.

Shape Your Life is held at the Toronto Newsgirls Boxing Club, known as the first women-led boxing club in Canada.

Created by van Ingen, boxing coach Savoy Howe, and Opportunity for Advancement’s Green in Toronto in 2007, the idea is to use physical movement as a way of empowering women.

“We use physical activity to create a safe environment where participants can focus on reconnecting and regaining control of their bodies and on rebuilding their lives, feeling less anxious, less rage and in more control,” says van Ingen, associate professor in the Faculty of Applied Health Sciences’ Department of Kinesiology.

“Trauma is held in people’s bodies and healing from violence involves knowing and feeling that you are in charge of your own body.”

Shape Your Life differs from conventional counseling programs in that the focus is on using physical activity – rather than only talking – to help women work through the trauma they experienced from violence.

Included within the program are additional supports for the women, such as a food bank and transit tokens.

Among the many amazing transformations van Ingen has witnessed since the program launched in 2007 is that of Jivraj, who is now Shape Your Life’s program coordinator.

In the decade from being a ‘pilot participant’ to program coordinator, Jivraj earned two university degrees: a Bachelor of Social Work and a Master of Social Work.

She recalls how the physical motions of boxing and exercise led her to develop thoughts of strength and control during her step-by-step journey.

“I do remember this moment when I came out of the gym and I’m walking and I realize, ‘I’m walking tall, I’m walking in the middle of the sidewalk, I’m not trying to make myself small or invisible or make it OK for people to walk around me,” says Jivraj. “That is so powerful.”