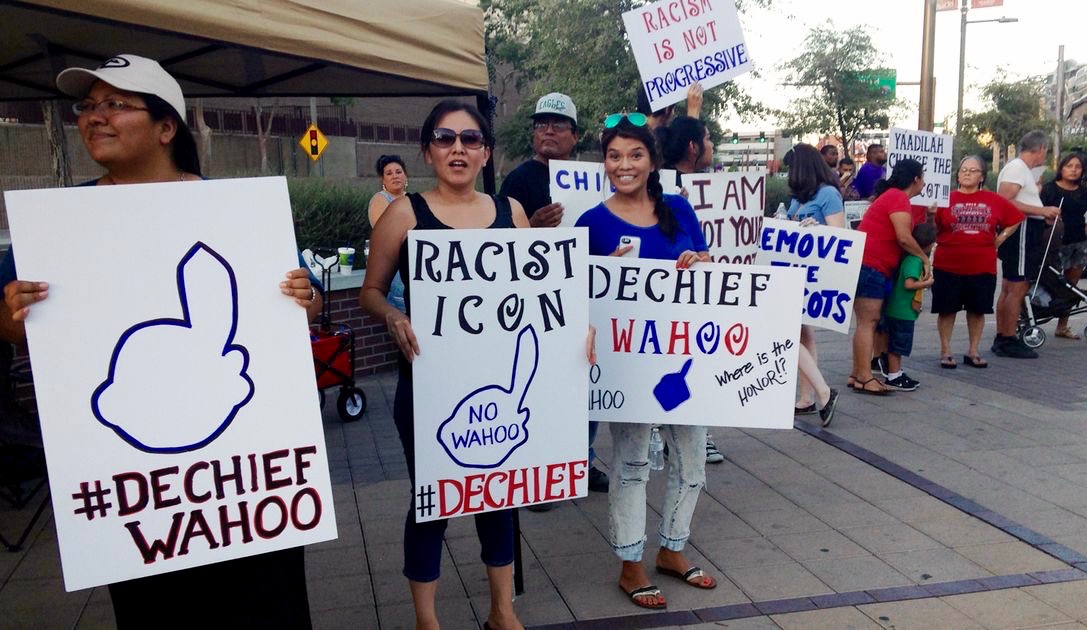 Protests against the names and logos used by Cleveland Indians and other sport teams have been the subject of increasing media attention.

When Colleen Patterson first saw the logo for the Cleveland Indians baseball team, she felt like she’d been punched in the stomach.

“I was shocked to see that this is actually a part of fan culture,” recalls the Indigenous scholar. “I thought it was a joke, like some kid made up this thing to be funny.”

It was no joke.

The American League team created its “Chief Wahoo” emblem in 1947, based on a comic strip from the previous decade. The current logo — a red, broad male face with a big grin and a feather sticking out of his headband — was redesigned in 1951 from the earlier version that had a larger nose and yellowish-orange skin.

“This is a mockery to very strong, very intelligent people,” says Patterson, who is Métis. “We have our own imagery that we encapsulate to express ourselves. This is not the kind of imagery we see instilling pride.”

On Friday Nov. 18, Patterson will join Applied Health Sciences researchers Craig Hyatt, Hilary Findlay and Cathy van Ingen in a Brock University panel discussion, ‘Deconstructing the use of Indigenous names and images in sport.’ The event starts at 3 p.m. in Thistle 325. Scott Henderson, Associate Professor in the Department of Communications, Popular Culture and Film, will moderate the discussion.

Certain sports teams have been increasingly accused of demeaning Indigenous people through the continued use of logos, mascots and other text or imagery. Last month several groups asked the Ontario Superior Court to block the Cleveland Indians from using its team name or “Chief Wahoo” logo during an American League playoff game in Toronto. After the court rejected the request, Major League Baseball issued a statement saying it appreciates the concerns of those who find the name and logo offensive, and “we would welcome a thoughtful and inclusive dialogue to address these concerns outside the context of litigation.”

Panel co-organizer Lisa Kikulis, Associate Professor and Chair of the Department of Sport Management, says a logo like “Chief Wahoo” is becoming increasingly problematic in sport management and sports in general.

“In general, there is a more overt effort towards social responsibility,” she says. “We see changes in public policy and organizational policy in the non-profit and commercial sectors of sport in areas of gender, race, ethnicity and social class, where questioning the status quo has led to more inclusivity.”

But there is still resistance to these changes, she says.

“Indigenous team names and logos are typically framed in terms of how passionate fans are about their team’s name, its history in the community or the economic cost of change,” explains Kikulis.

“We need to keep the debate going and dig a little deeper about uncovering the history, the cultural landscape, the legal, and the consumer’s interest in social responsibility and also giving voice to those whose voice has not been adequately heard.

“More importantly, we want to provide our students with more opportunities for discussion and awareness of the complexity of this issue and how leadership in the field of sport management includes taking leadership on social change for a more inclusive sport and society.”

Patterson says logos like those used by teams in Cleveland, Chicago and Washington dehumanize Indigenous peoples, turning real people into cartoon concepts. She says publicly caricaturizing a group of people – like what was done in 1930s Nazi Germany – makes it easier for that group to be mistreated.

The Nov. 18 panel expects to address these and other issues.