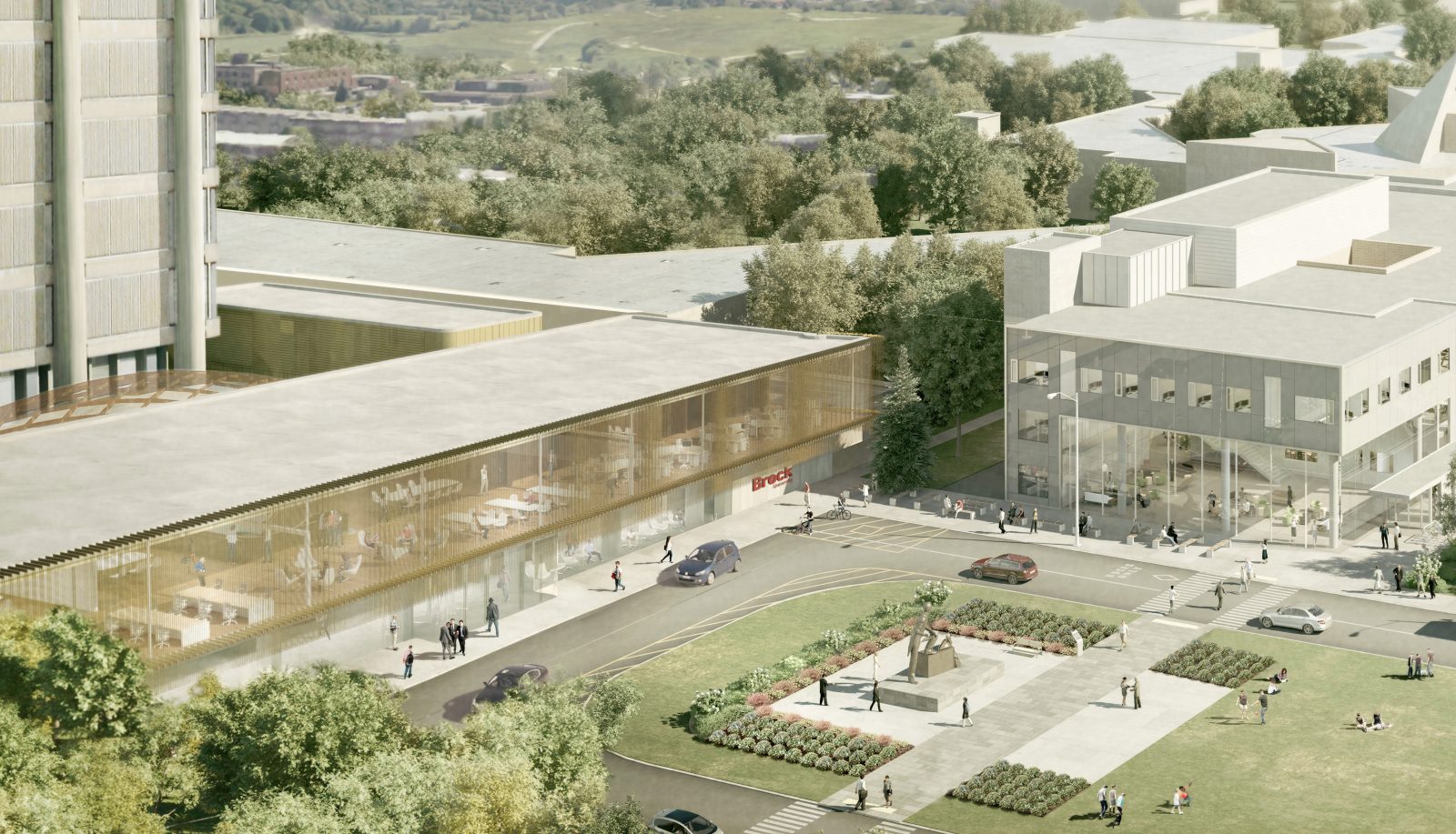 This artist's rendering shows how Brock will look when the new Brock LINC is complete along with the transformation of the Goodman School of Business.

Brock University today received more than $16 million from the Government of Canada and Government of Ontario for two major projects that will significantly improve Niagara’s capacity to drive innovation into our community and accelerate the University’s capacity to meet its GHG carbon intensity reduction target.

The Brock LINC will be a striking two-storey innovation complex that will provide much-needed space to nurture Niagara’s growing culture of innovation. It will provide students with the space to experience and experiment with entrepreneurship and will add a strategic asset within Niagara’s innovation ecosystem that supports a greater number of research and development partnerships between Brock and Niagara’s businesses and social organizations.

The LINC’s contemporary design will dramatically change Brock’s iconic Schmon Tower, converting an open-air pedestrian mall into a modern, purpose-built 41,000-square-foot innovation centre that places research, commercialization, entrepreneurship and innovation at the entranceway to the University.

This once-in-a-generation investment by the Government of Canada is a historic down payment on the government’s vision to position Canada as a global centre for innovation.

Brock’s co-generation facility provides a reliable and energy-efficient source of electricity, cooling and heating for the University. However, Brock’s energy needs, associated with its growth and increased research activity, exceeds what the facility can supply, both electrically and thermally. At the same time, some of the infrastructure has reached its end-of-life. The investments announced today will ensure the long-term viability and efficiency of Brock’s co-generation facility. They will help Brock meet its own sustainability targets while also putting the University in a better position to contribute to sustainability and climate change goals locally, provincially and nationally.

“This once-in-a-generation investment by the Government of Canada is a historic down payment on the government’s vision to position Canada as a global centre for innovation,” said Bains. “That means making Canada a world leader in turning ideas into solutions, science into technologies, skills into middle-class jobs and start-up companies into global successes.”

Minister Matthews said investing in Ontario’s students “is an investment in our future.”

“Our government’s support of new state-of-the-art facilities at Brock University will help equip the young people of the region with the skills they’ll need to be leaders in new industries and build up the economy,” said Matthews.

“With the Brock LINC, we will be much more able to help innovators make Canada a world leader on intellectual and economic fronts,” said Traves. “As well, today’s funding lets Brock be part of the effort to help make Canada a leader in lowering the carbon emissions that are damaging the Earth’s environment.