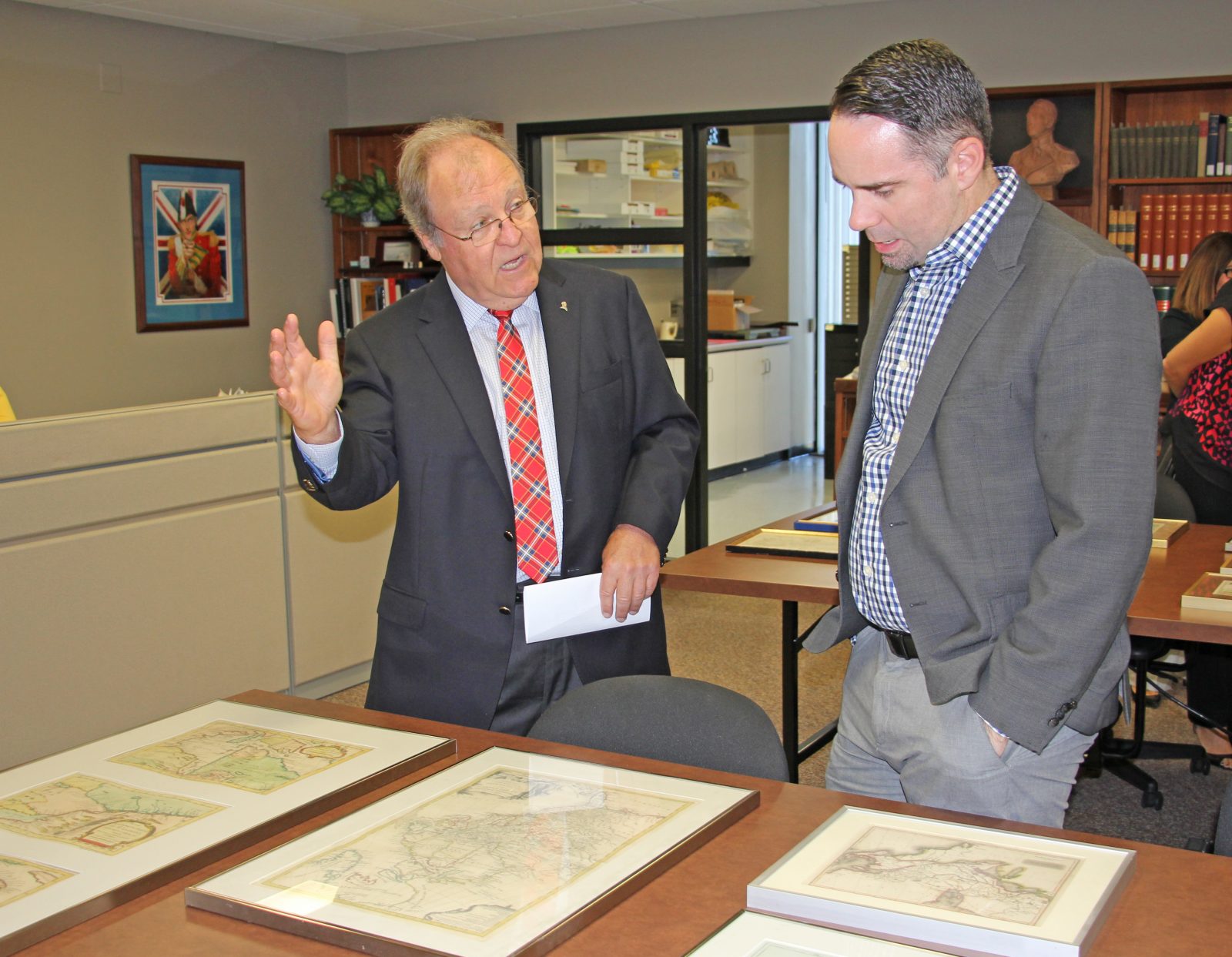 Brock alumnus Dan Livermore talks with University Librarian Mark Robertson about a collection of maps he donated to the University's Special Collections and Archive Friday, Oct. 7, 2016.

As Dan Livermore traveled around the world working as a Canadian diplomat and international affairs specialist, he made sure to visit small map shops wherever he went.

Over nearly four decades he collected maps from the 17th and 18th centuries that focused mostly on Ontario and Eastern Canada.

“I studied history and my focus was on the 18th century so that’s when the maps are the most interesting to me. They show the changing boundaries and the locations of the Indigenous groups,” said Livermore, a Brock alumnus who donated a valuable collection of maps to the University library’s Special Collections and Archives on Friday.

Livermore is a longtime donor and supporter of Brock University who graduated in 1969 with a BA in history and politics. He served as Canada’s ambassador to Guatemala and El Salvador and went on to become Canada’s Director General of Security and Intelligence before retiring in 2007.

He now works in the Graduate School of Public and International Affairs at the University of Ottawa.

Livermore bought his first map not long after graduating from Brock when he lived in New York City in the early 1970s. He added dozens of maps to the collection over the years, but all are either English or French and are from the era he prefers.

“It was interesting to see how they got their information and then how it would get back to the map makers. You see funny commentaries on some of the maps like ‘We don’t know what lies beyond here,’” he said. “To me, they become less interesting the more accurate they get, so I stopped with maps from the early 19th century.”

Heather Whipple, the acting head of maps, data and GIS for the library said she was thrilled to see the donation Friday.

It will be Whipple’s job to digitize all of the maps and eventually add them as layers that can be compared to modern Google Earth maps.

She said the maps will be useful for students researching many areas of history.

“For example the maps that show the Indigenous groups and where they were located will be of use to Indigenous Studies students to compare where those groups were 200 years ago and where they are now,” said Whipple.

The maps will also be viewable by the Niagara community.

“Libraries play an increasingly important role as stewards of our cultural heritage. This includes collecting rare materials like these maps that provide a window into our history,” said University Librarian Mark Robertson. “This wonderful donation will complement our collections and have special relevance given the history of this region.”