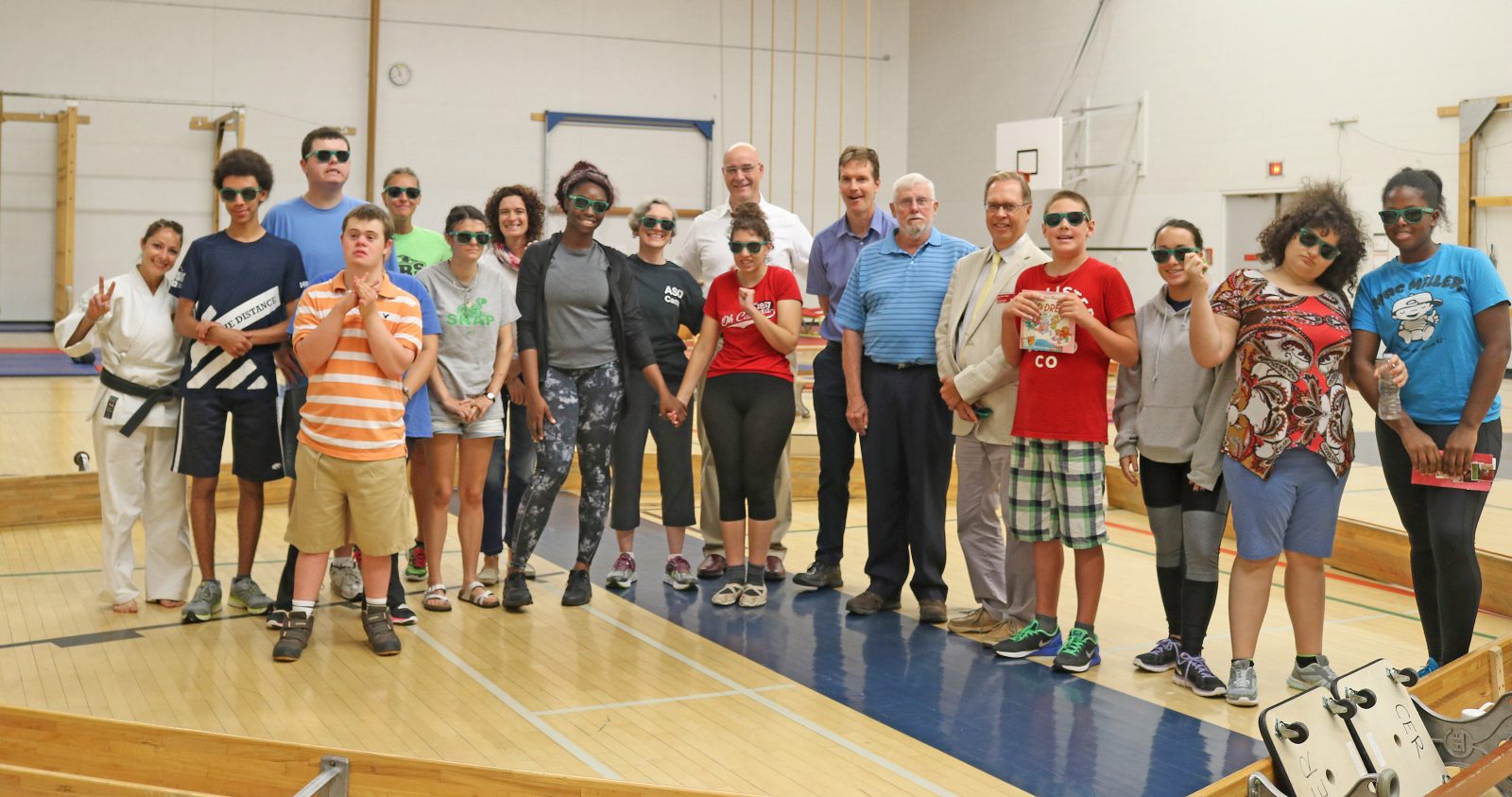 A group of campers from the Autism Spectrum Disorder Summer Movement Camp at Brock University pose with officials from Brock, the Region of Niagara and Niagara Recycling, which has funded the camp for the past 20 years.

Samantha Nichols turned 12 during her first week at Brock University’s Autism Spectrum Disorder (ASD) Summer Movement Camp. That was in 1996. This past Tuesday she celebrated her 32nd birthday with the people who have become familiar to her in the last two decades.

“It’s always been Sam’s birthday during camp and we always do something special for it. On her 30th birthday the students and campers made her a banner and signed it,” says Department of Kinesiology professor and Camp Founder Maureen Connolly.

“This year, the mentors all wore Happy Birthday tiaras in honour of this annual celebration.”

Nichols’ father Terry says his daughter has thrived at the annual camp and looks forward to it each year.

“My daughter Sam enjoys attending this camp not only because it has improved her movement ability and potential, but also because she feels like she is in a community of people who know her and genuinely care about her,” he says.

“She can be herself and can have meaningful relationships in a safe and engaging environment.”

The camp started offering developmentally appropriate movement education to children and youth in the Niagara Region in the summer of 1996.

“I started this camp 20 years ago because parents were distressed that none of the local camps could accommodate their children,” says Connolly.

The first summer, 18 participants aged four to 14 were enrolled.

“Each time we host the camp, we learn something new and make modifications for the next camp, constantly improving it,” says Connolly.

The camp’s education-based curriculum is specifically focused on the needs of the participants and is a community service learning opportunity that attracts 30-50 undergraduate students and an almost equal number of campers each year.

Every summer there are two, week-long camp programs for children and youth from ages three and up. By the end of summer, the camps will have hosted more than 2,000 participants.

The camp also operates as a site for research, as well as service learning and pedagogy with the past five years seeing increasing numbers of graduate students involved in various capacities.

“All of the students who have been involved in this camp have gone on to do great things with their careers. They have become nurses, special education teachers, principals, the list goes on,” says Connolly.

Funding for this much-needed program is made possible by Niagara Recycling.

“Given the service learning model that we use at the ASD summer movement camp, there is no way these camps could have continued to function and offer its ongoing low costs to parents – and full subsidies in some cases – without the support of Niagara Recycling,” explains Connolly.

“Through our long standing partnership with the Niagara Region, Niagara Recycling is proud to have supported the Autism Spectrum Disorder Summer Movement Camps at Brock University for nearly all of its 20-year history,” says Niagara Recycling Chief Executive Officer Norman Kraft.

“We are pleased that through our financial support, Brock University is able to offer meaningful, active leisure to the children and youth who enjoy these camps each summer.”