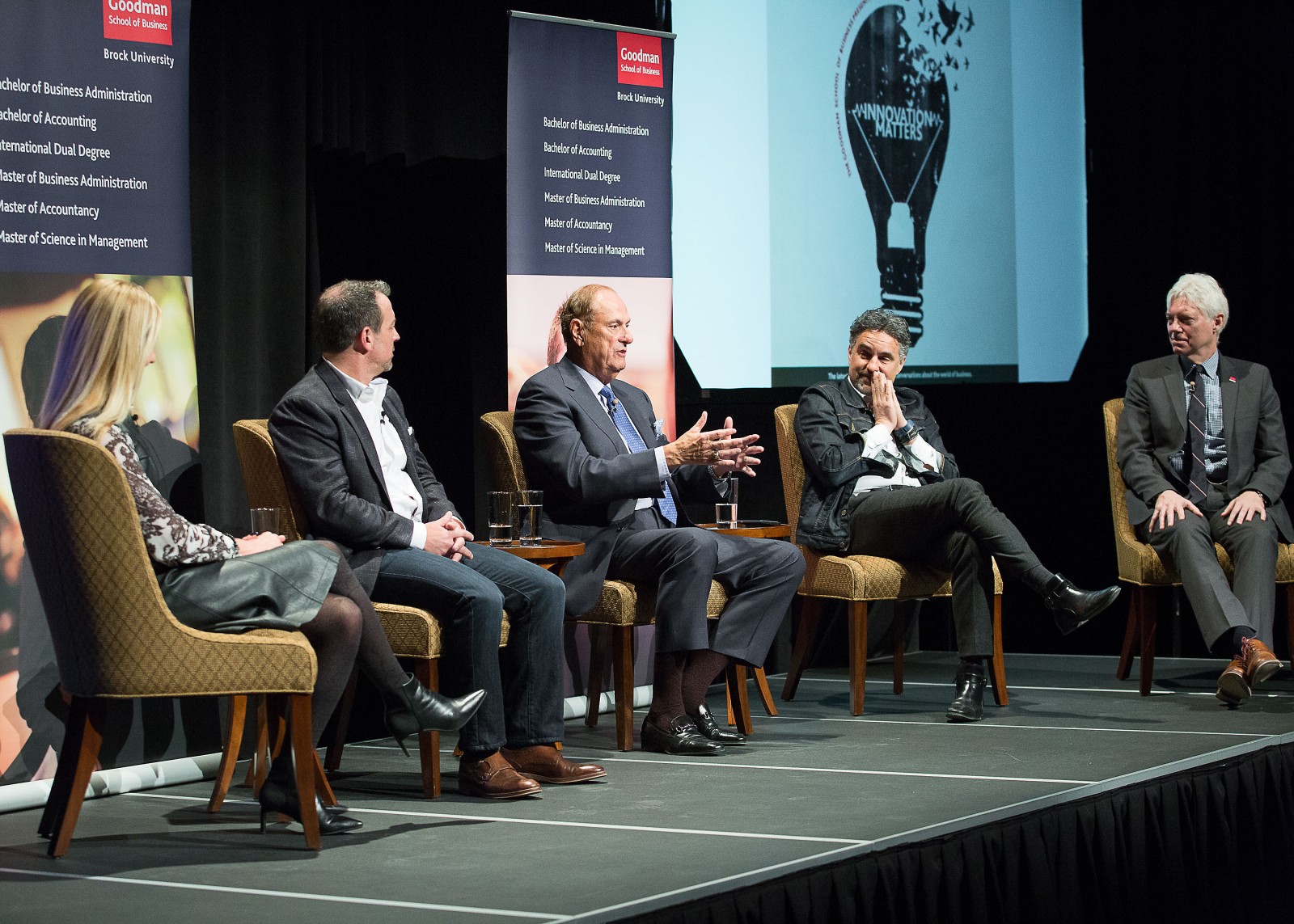 Brock University students Madi Fuller and Harrison Olajos know they have a monster of an idea in their tutoring app Campus Brainiac.

The two students impressed the stars from CBC’s Dragons’ Den and were rewarded with a cash investment last week during Monster Pitch. They were the winning team among one of the strongest pitch presentations celebrity venture capitalist Jim Treviling has seen.

Their innovative idea is a web platform and mobile application that simplifies peer tutoring. Using aggressive timelines and big thinking, they are set to launch at four universities – Brock University, OCAD University, Western University and University of Toronto – this week, with a bigger launch set for the fall of 2016.

“I’ve been watching Dragons’ Den since it started,” said Fuller, a third-year political science student. “So to meet these people and get feedback from them on our business was a surreal experience.”

Both Fuller and Olajos competed at last year’s Monster Pitch with a different venture, so they have ample experience pitching business ideas. At this year’s competition, they took their business idea to a new level, as they are in the final stages of getting the business off the ground.

Having sharpened their pitches with the help of BioLinc, Brock’s business incubator run by the Goodman School of Business, they won $2,000 in cash and $500 worth of services from Brand Blvd. at the Monster Pitch competition.

I had a great time. The pitches — we saw five different pitches — unbelievable.

The judging panel consisted of Treliving, one of five judges on CBC’s Dragons’ Den, Bruce Croxon, co-host of BNN’s The Disruptors and CEO of Round 13, Deborah Rosati, corporate director and co-founder of Women Get On Board, and Jason Sparaga, co-founder and co-CEO of Spark Power Corp. and founder of Spara Capital Partners.

“I had a great time. The pitches — we saw five different pitches — unbelievable,” Treliving said.

He said the pitches have come really far since the first ones he saw on Dragons’ Den and also at the first Monster Pitch at Brock.

“I think the professors here are showing the kids what they should be doing and what they have to do to make a pitch, and that’s really, really important,” he said. “That’s really how they get into being great entrepreneurs.”

The annual Monster Pitch, hosted by Goodman student club Brock Innovation Group and sponsored by Spara Capital Partners and Meridian Credit Union, had all the polish and panache that a proper pitching competition should have. Held at the FirstOntario Performing Arts Centre, Monster Pitch was a fully produced show with the lights, the cameras and the action. Five student teams took the stage and presented innovative business ideas, ranging from digital archiving services to ridesharing applications and a custom clothing platform.

The community within BioLinc has grown steadily since it started at Brock and they are successful in fostering a community of entrepreneurial spirit on campus.

The judges were duly impressed with all five presentations, and commented several times about the high quality of pitches this year’s competition was seeing, a testament to the integral role BioLinc plays on campus in supporting entrepreneurial students in all the right ways.

Fuller and Olajos credit their progress to BioLinc, which brought the two of them together and has provided them with support and guidance along the way. Olajos has been involved with BioLinc since his first year at Brock and he has noticed big changes.

“The community within BioLinc has grown steadily since it started at Brock and they are successful in fostering a community of entrepreneurial spirit on campus,” he said.

Monster Pitch was preceded by Innovation Matters, a public panel discussion organized and hosted by the Goodman School of Business, featuring the Monster Pitch judges talking about today’s entrepreneur and innovations happening in Canada.