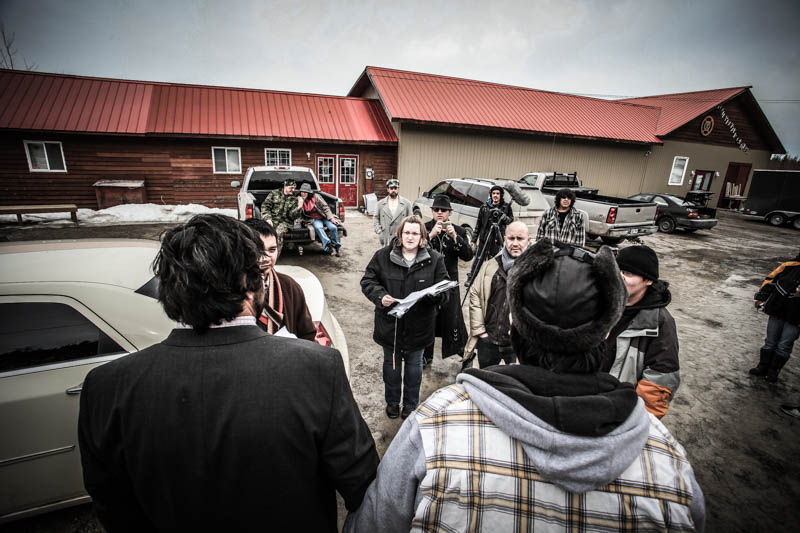 Behind the scenes of WFI production All Over Towne.

This marks the first time in the history of the Film program, Canada’s oldest, that the course will be held off-campus, some 600 kilometres away.

The production course, a long-time offering in the program, will also be open to non-majors and to students from other institutions for the first time.

“I think that the nature of this close working environment at Weengushk Film Institute will help students create bonds that they will take forward, and will expose them to experiences and filming conditions that they would not normally encounter,” says Scott Henderson, chair of the Department of Communication, Popular Culture and Film.

Weengushk Film Institute (WFI), founded by Shirley Cheechoo in 2002, is an artist-focused centre for capacity building in the media arts for both Indigenous youth and persons of diversity.

Henderson first learned about the Weengushk Film Institute several years ago at Cinéfest in Sudbury, when he met students who were training there. He was immediately impressed by their work and knowledge.

So, when Shirley Cheechoo became the Chancellor of Brock University, Henderson approached her about creating an opportunity for students to train at the institute in a collaborative production environment. The plans for the spring course were soon underway.

“WFI is excited about the implementation of programming for participants studying at the university level,” says Cheechoo.

The chance to train in film and video production is one in which students from many disciplines will see value.

“We live in a world increasingly dominated by visual images, so the ability to interpret, understand, and create narratives with image-based media is an indispensable skill,” Henderson explains. “Students hoping to work in film or other media, design, web development, advertising, and many other fields will benefit from understanding the creative process related to visual communication.”

Students interested in registering for the course can find more information at www.brocku.ca/springfilm.