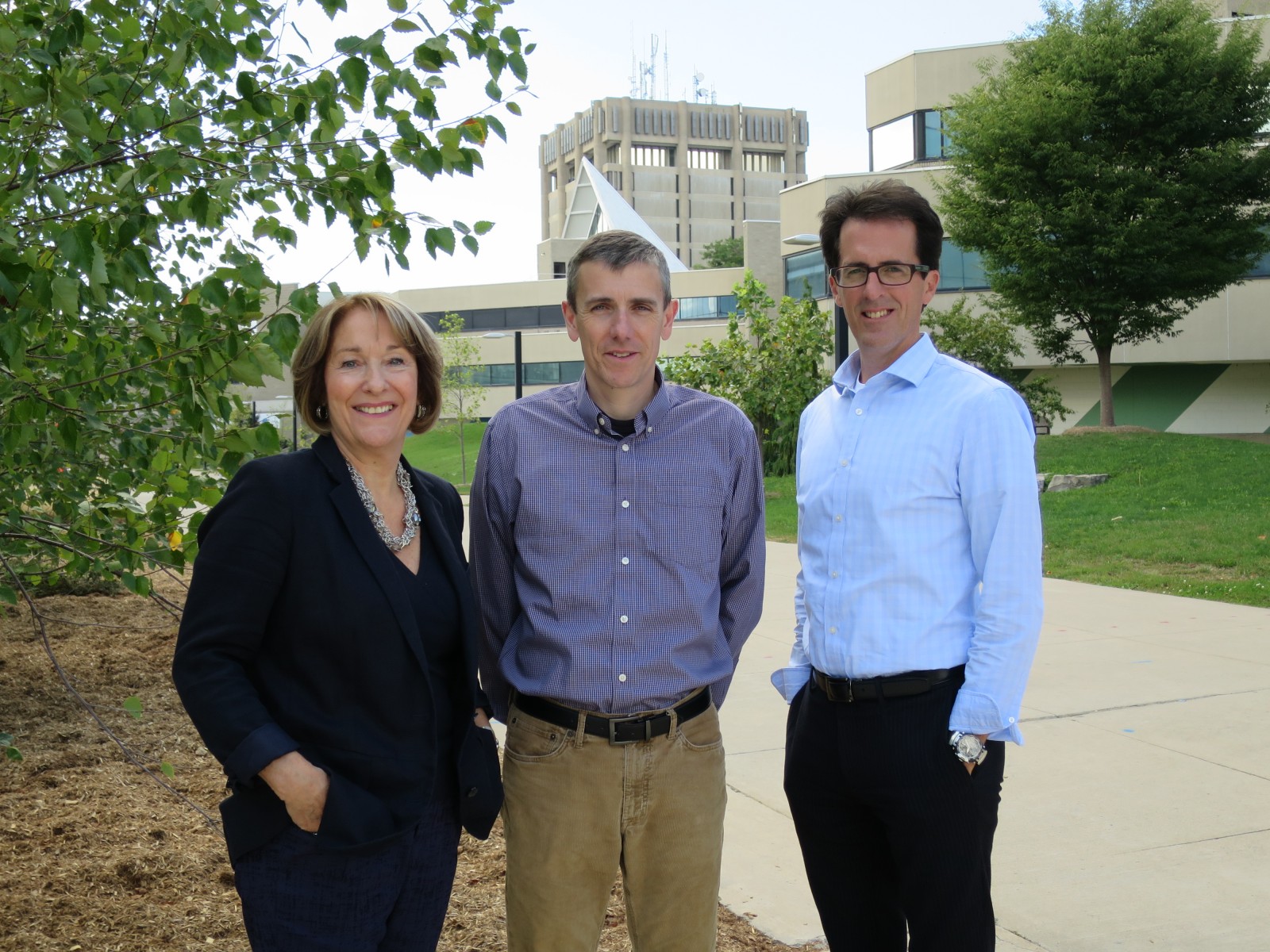 The 2015 MNK Award winners, from left, Nancy Francis and Thad Harroun, winners of the Graduate Mentorship Awards, and John McNamara, winner of the Marilyn Rose Leadership Award. The deadline for 2016 nominations is Thursday, March 10.

A lot of things have changed in the world of research and graduate education since Mike Plyley was a PhD student in the mid-70s.

However, amid all the change, Brock’s Dean of Graduate Studies says strong faculty mentorship, and committed individual and team leadership, remain constant characteristics of successful graduate programs, and represent critical values to instill in graduate students as future leaders of tomorrow.

On April 7, the Faculty of Graduate Studies celebrates its community of faculty, staff and students with the presentation of the Graduate Mentorship Awards and the Marilyn Rose Graduate Leadership Award at Brock’s 11th annual Mapping the New Knowledges (MNK) Graduate Student Research Conference.

Nominations for the awards are open until March 10. Information is available on the awards website.

The nominations for both of the awards are proof that a graduate studies culture is alive and developing at Brock and this is very, very gratifying.

Graduate students are invited to submit nominations to the Graduate Mentorship Awards as a way of honouring and recognizing the essential role of mentorship in graduate education by graduate faculty supervisors in two categories:

The Brock community is invited to submit nominations to the Marilyn Rose Graduate Leadership Award. This is the second year for this award that was established to recognize faculty, staff and students for their work and leadership in enhancing the graduate studies experience at the University. The award is named in honour of Professor Rose, Dean of FGS from 2005 to 2011. Professor Rose passed away in July 2015.

“The nominations for both of the awards are proof that a graduate studies culture is alive and developing at Brock and this is very, very gratifying,” says Plyley. “We have so many people throughout our graduate programs doing the kinds of things that make the graduate experience fulfilling for everyone involved.”

Since the Graduate Mentorship Awards were established in 2011, more than 50 nominations have been submitted with 10 awards presented to date.

“Mentorship is near and dear to my heart,” says Plyley, who studied Medical Biophysics at Western University. “I had a fabulous supervisor. He was engaging, he made time to talk – time that he gave freely through an open door, drop-in-anytime, policy. He took an interest in your training, your research, your goals – and in me as a person.”

Physics Associate Professor Thad Harroun, a 2015 Mentorship winner, said the relationship he has formed with his students have benefited him as much as it has them.

“It’s just such a joy to work with them in labs and visit with them outside of labs,” he said. “This award is as much for them as it is for me.”

“We have amazing faculty, staff, and students who have made significant contributions to the development and culture of graduate studies,” says Plyley. “They come to campus each day and lead by example. Their dedication and commitment inspires everyone around them.”

The inaugural award was presented to Professor John McNamara, Child and Youth Studies, in April 2015.

“Working with graduate students is the best part of my job,” McNamara said. “What they bring to my life is something beyond words. It’s a real dream job.”