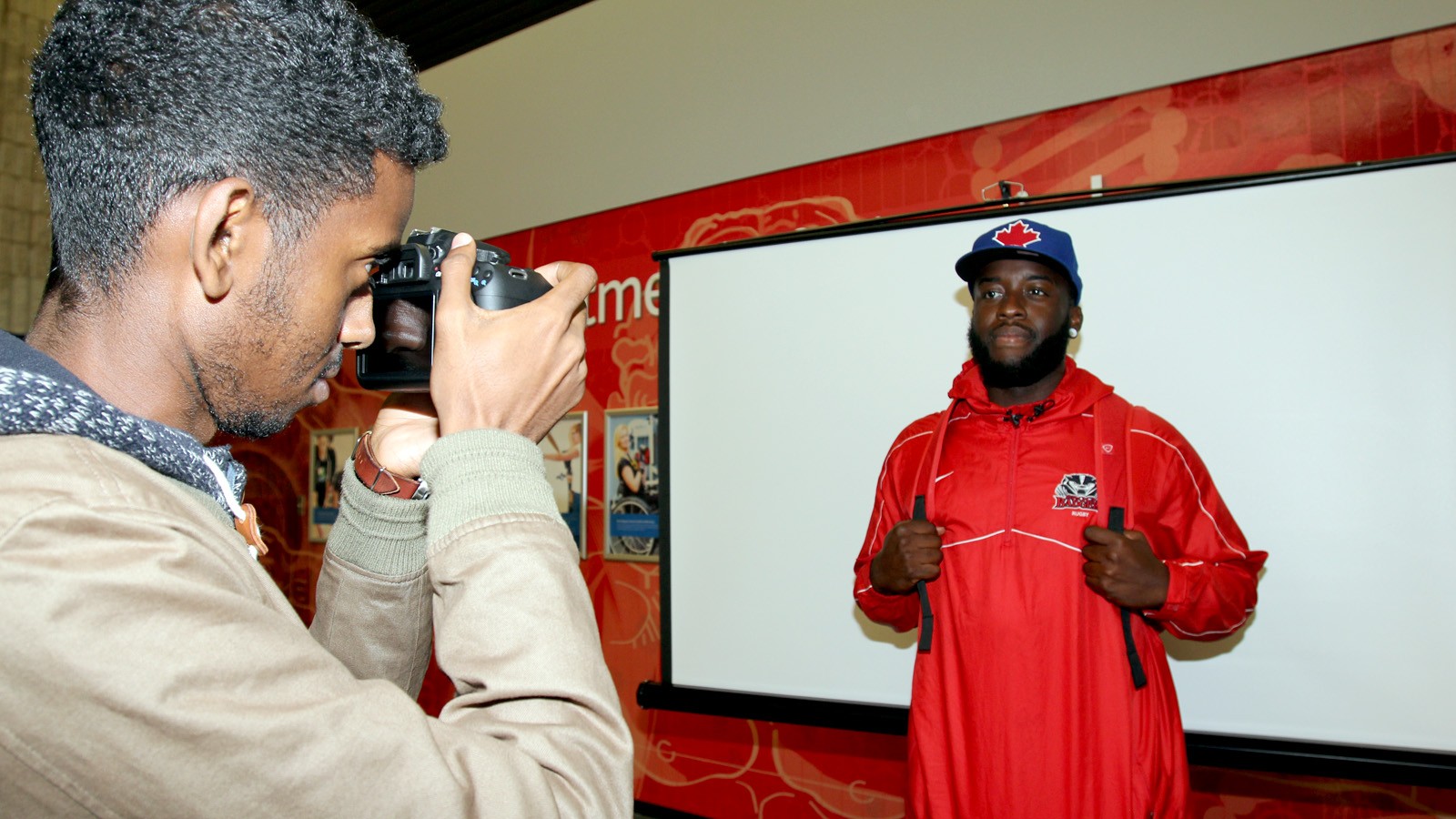 Mohamed Hassan takes a picture of Rugby player Kyle Boham for a photo he can share on social media to promote #WeAreReady hype night Oct. 6.

Bawe Nsame has no shortage of school spirit.

He’s spreading his Badger pride with a new campaign called #WeAreReady. It’s already catching on with more than half of the 1,000 free tickets available for hype night – a pep rally planned for Oct. 6 – gone.

“We’re creating an exciting, positive atmosphere with chants, waves and synchronization,” Nsame said, noting research shows that creating that kind of energy is effective and contagious. Bawe Nsame has launched the #WeAreReady campaign. A pep rally is planned for Oct. 6 at 5 p.m.

He plans to turn those in attendance from fans into super fans.

He wants to recreate the atmosphere he felt in the gym last season during three sold-out basketball games. That feeling of pride, community and celebration should fill the gym during all home games, no matter what sport, he said.

And who better to inspire students than the University’s namesake, Sir Isaac Brock.

After researching Brock and his role in the War of 1812, Nsame said he knew the soldier’s history of perseverance would help drive his campaign.

He said people in London, England didn’t believe that Maj.-Gen. Brock could win and they were ready to give up.

“But, he won. He was ready,” Nsame said, adding Brock and his soldiers knew they could win.

“Every time someone walks in our gym we want them to know ‘We Are Ready!’” he said. “We want to protect our house and support our athletes.”

Students lined up in the Walker Complex Wednesday to have their photo taken while grabbing a free ticket to the pep rally. Hassan is sending every student who signs up to attend the event a photo to share on social media, letting their friends and followers know they are ready. There will also be some T-shirt giveaways at the rally, which will be attended by about 200 athletes. Mohamed Hassan edits a social media photo he is sending to every student who signs up to attend the #WeAreReady hype night Oct. 6.

Hassan said the school spirit the campaign has already generated will continue growing and spreading among students and staff.

“It’s not just a catchphrase, it is part of our history,” he said. “The emotional tie and the energy will make this last.”

The pep rally is being held on Oct. 6, which Nsame later learned is Brock’s 246th birthday.

For more information on all the events planned to mark Brock’s birthday visit: http://brocku.ca/brock-news/2015/10/a-birthday-party-for-sir-isaac-brock/ Bawe Nsame, right, and Mohamed Hassan are spearheading the #WeAreReady campaign. A pep rally is planned for Oct. 6 at 5 p.m.