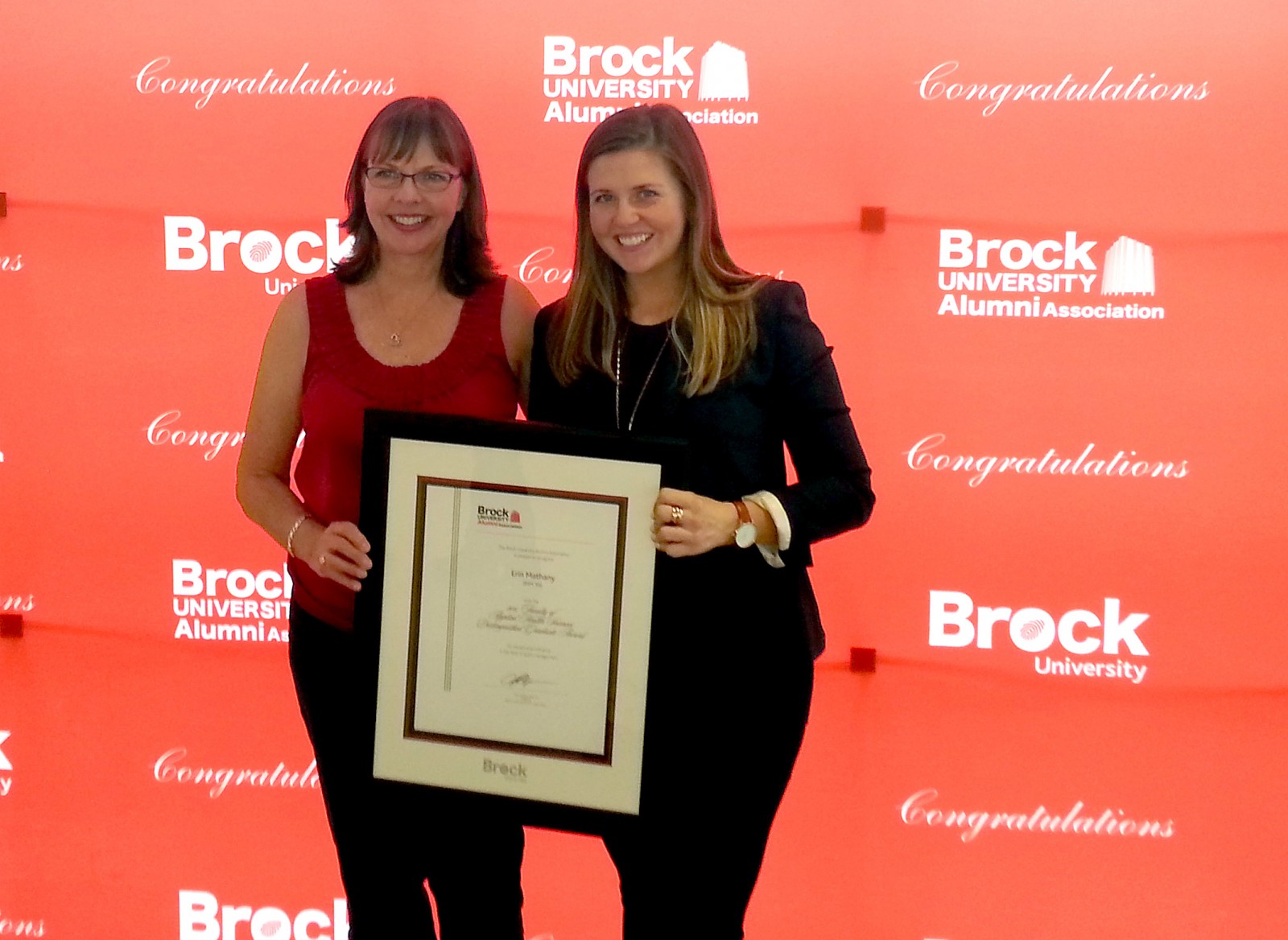 Erin Mathany, right, and her mother Janet pose for pictures after the Sport Management grad was awarded a 2015 Distinguished Alumni Award.

It wasn’t until Erin Mathany took a course mixing sports and business in her first year of university that she knew she was on the wrong path. She always thought she’d work in the health-care industry. It was the academic trajectory she’d always been on.

But, that one course changed the course of Mathany’s professional life.

“I was studying Health Sciences at Western and in that program we took a Kinesiology course which had a sport business element to it,” she recalls. “I loved the idea of working in business but still maintaining a connection to sport.”

After her first year, she left Western and enrolled in the course that merged her new-found love of business and her passion for sports.

“The Sports Management (SPMA) program at Brock is one of the most respected in Canada and the United States.”

“The Sports Management (SPMA) program at Brock is one of the most respected in Canada and the United States,” she says.

Brock’s smaller class sizes and the opportunity to get direct-learning support from professors who care and have real experience in the field drew Mathany to the program.

“I wanted a degree that had practical application and set me up for a career that I could feel really passionate about,” she says.

Mission accomplished. Mathany is currently the Director of Strategic Partnerships with the Canadian Olympic Committee.

“I’ve been really lucky to find the career path I have,” she says.

She was recently honoured by the Brock University Alumni Association with a 2015 Distinguished Alumni Award.

“For me, being able to represent sport management is really quite an honour, especially given the roster of incredible alumni we have,” she says.

After graduating from Brock in 2005 with an Honour’s Bachelor of Sport Management, Mathany pursued her Master’s of Business Administration at Wilfred Laurier University, graduating in 2008.

While at Brock, Mathany developed herself through various volunteer roles to enhance her sport industry network. In 2007, she became account manager with Government Partnerships and Commercial Rights Management with the Vancouver Organizing Committee for the 2010 Olympic and Paralympic Winter Games.

She said her time with the Vancouver committee was “life-changing” as it opened up opportunities and prepared her for her role with the Canadian Olympic Committee, where she oversees the commercial interests of the organization. While Toronto is not bidding for the 2024 Summer Olympics, Mathany says the COC is supportive of bringing the summer games to Canada in the future.

“I’m hopeful that in my lifetime, this country will host another Olympics,” she says.

She points to the 217 medals Canada earned at the Pan Am games, second only to the United States.

“We saw an incredible outpouring of support for our summer sports,” she says. “It will create tremendous momentum going into Rio.”

Over the past decade, Mathany’s strong connection to Brock has continued.

She gives back because she feels she was given so much.

“The only reason I am in the position I’m in is because of the support of the faculty in the sport management program,” she says.

She has chaired the Sport Management Alumni Board since 2011.

“Erin is tireless in her advocacy and support of our program,” says associate professor Kirsty Spence. “She provides an example for all students and women in our program.”

She said Mathany also played a pivotal role in developing the Alumni Liaison Board of Directors in the Faculty of Applied Health Sciences.

“There are a significant number of alumni working in the sport industry, creating a community of support for the student upon graduation,” Mathany says. “My favorite part of the program was hearing from and being inspired by guest speakers coming from the industry and our alumni network who shaped what I wanted to strive for and achieve in my career.”

Today, Mathany is the one inspiring students in the popular Brock program.