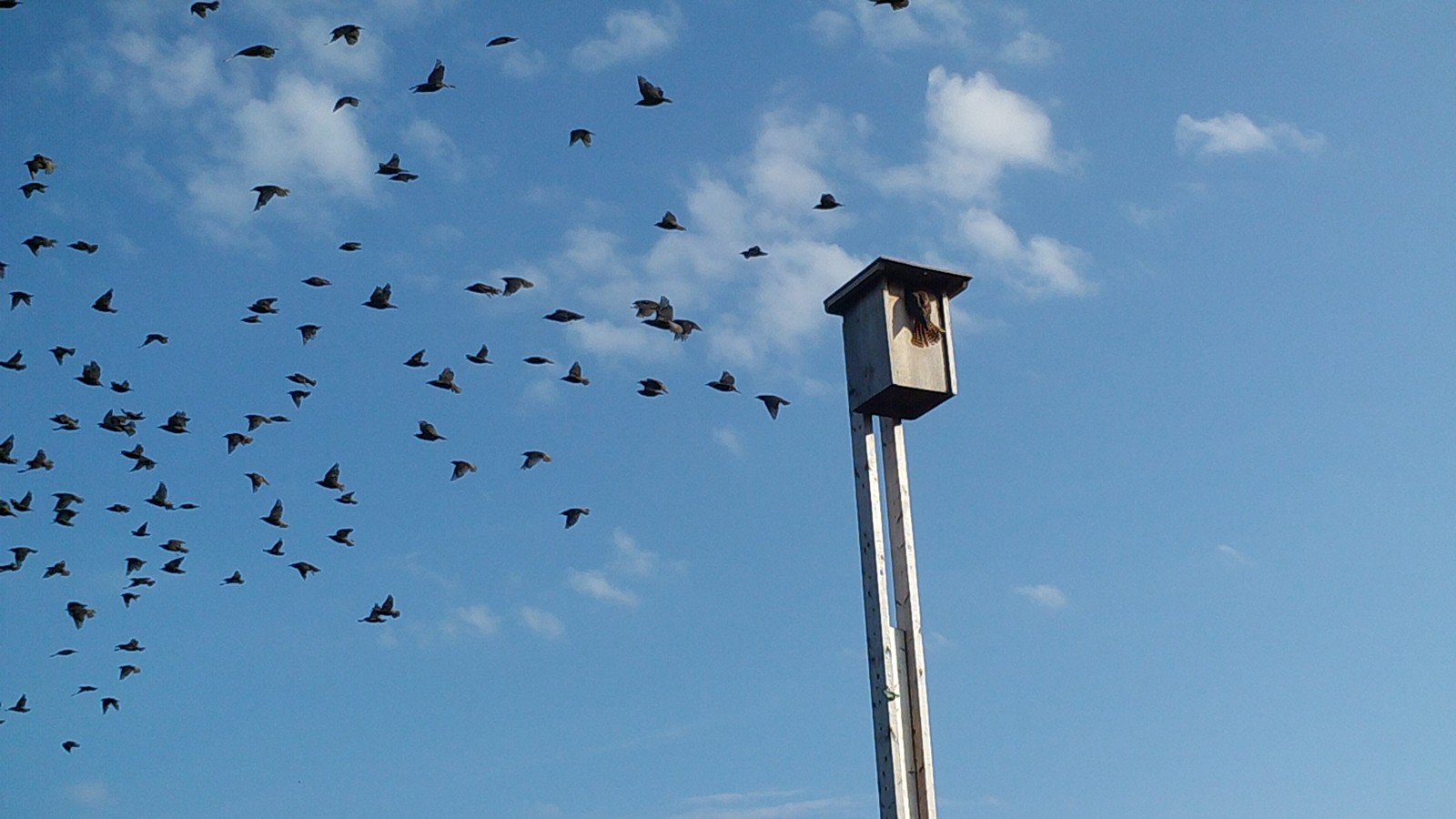 A flock of starlings take off as a kestrel arrives back at its nest box at one of the research trial sites.

As grape growers tend to their crops preparing them for harvest, something is cutting into, or rather snacking into, their bottom line.

“We live in a beautiful region,” said Willwerth, “But with this environment, we also experience an increase in bird pressure. There’s a lot of damage in the vineyard that the grower doesn’t see.”

Willwerth said current deterrent methods have mixed results. Netting is cumbersome, costly and difficult to remove immediately before harvest, while acoustical deterrents such as bird bangers have negative effects on neighbour relations.

This is why over the past three growing seasons, Willwerth and his technician Mary Jasinski have been working with the Ontario Fruit and Vegetable Growers Association and the Grape Growers of Ontario to investigate new bird deterrent strategies.

The team started by estimating the bird pressure within the region, appraising the damage those birds were causing in vineyards and orchards, and then identifying the species that are most problematic.

One promising deterrent strategy is having growers attract natural predators native to the area like the American kestrel. The kestrels’ presence can alter the behaviour of problematic non-native birds like European starlings.

Kestrels, a territorial bird that prey on problematic vertebrates and invertebrates, can be attracted to take up residence by placing nest boxes at the edge of properties. Along with benefits to growers, this strategy might help rehabilitate the kestrel population which has had low numbers recently in Southern Ontario.

Willwerth and his team have also partnered with a New Zealand company to investigate visual options to deter birds using specialized lights in Ontario vineyards.

What the team has found so far is that there’s no one-size-fits-all solution to deterring birds. The best strategy is a bigger arsenal of control options that growers can draw from when protecting their crop.

“In the end, we want to give growers more tools to combat bird and vertebrate damage in practical and environmentally sustainable ways,” said Willwerth.

They are now looking at the effectiveness of deterrent strategies in different varieties of wine grapes and other fruit crops such as cherries and blueberries. Trial sites are located across Niagara and Norfolk County.

Susan Fitzgerald from Fitzgerald & Co. and Hugh Fraser from the Ontario Ministry of Agriculture Food and Rural Affairs partnered with Willwerth on this project. Funding was also provided by the Ontario Vineyard Improvement program, EverEdge IP and Agriculture-Wildlife Conflict Strategic Funding.