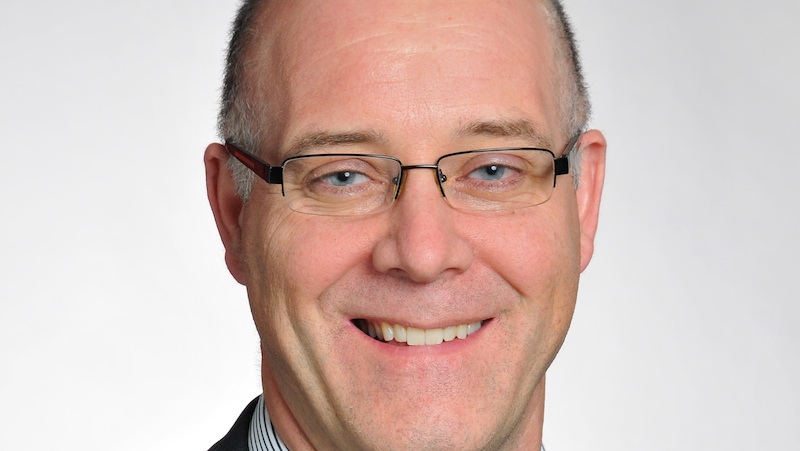 Brian Hutchings, Vice-President of Finance and Administration at Brock University.

Brian Hutchings knows all too well the toll of Alzheimer’s disease on a person and their family.

He watched as the disease stole away his paternal grandmother. Over eight years, the disease robbed her of everything that made her who she was. Her memories were the first to go. Then she could no longer remember the names or faces of those she loved the most. Near the end, she did little more than stare into the distance.

She was a very proud lady, reduced to a shell of what she once was.

It was heartbreaking for her family.

“She was a very proud lady, reduced to a shell of what she once was,” Hutchings said.

Brock University’s Vice-President of Finance and Administration is the honorary chair of this year’s Alzheimer Society Coffee Break campaign, which kicks off with a special flag-raising event in front of Schmon Tower at 11:45 a.m. Thursday followed by a barbecue in Jubilee Court from noon-1 p.m.

Hutchings is candid about the impact of Alzheimer’s disease on his family, and his own fears about it.

“It does worry me,” he admits, noting his family history and time as a professional football player are potential risk factors.

While there’s no absolute link between Alzheimer’s and concussions, some research suggests head trauma could be a factor.

Hutchings had at least six concussions during his time on the football field. He is part of a Canadian Football League concussion study which requires him to undergo frequent memory and motor skills tests as well as MRIs. So far, he has not experienced any issues related to his concussions.

Hutchings’ connection to Alzheimer’s reaches beyond his personal life, he dealt with many in the community struggling with the disease during his years as Niagara Region’s commissioner of social services.

“Working in that environment, I learned a lot about the disease and dementia,” he said.

“They are a really lean machine, it’s a great organization,” he said. “All the money raised goes back to care in Niagara.”

The Brock Coffee Break event is one of more than 10,000 that will take place across Canada that day.

Teena Kindt, CEO of the Alzheimer Society of Niagara Foundation, encourages people to host a Coffee Break event in support of Alzheimer’s disease and other dementias, which affect more than 8,800 people in Niagara.

“We are continually overwhelmed by the positive community response to this campaign,” said Kindt. “Funds raised through Coffee Break events stay in Niagara to help us provide services and support to assist individuals and their care partners through their difficult journey. Our goal is to keep them independent in their homes and communities as long as possible. With demand for our services constantly increasing, we hope communities throughout Niagara will continue to show their support and help us reach our goal of $105,000.”

While Coffee Break officially kicks off Sept. 17, participants can host events anywhere during the campaign until the end of December. Register for a free kit by calling 905-687-3914 or emailing tmcdougall@alzheimerniagara.ca.