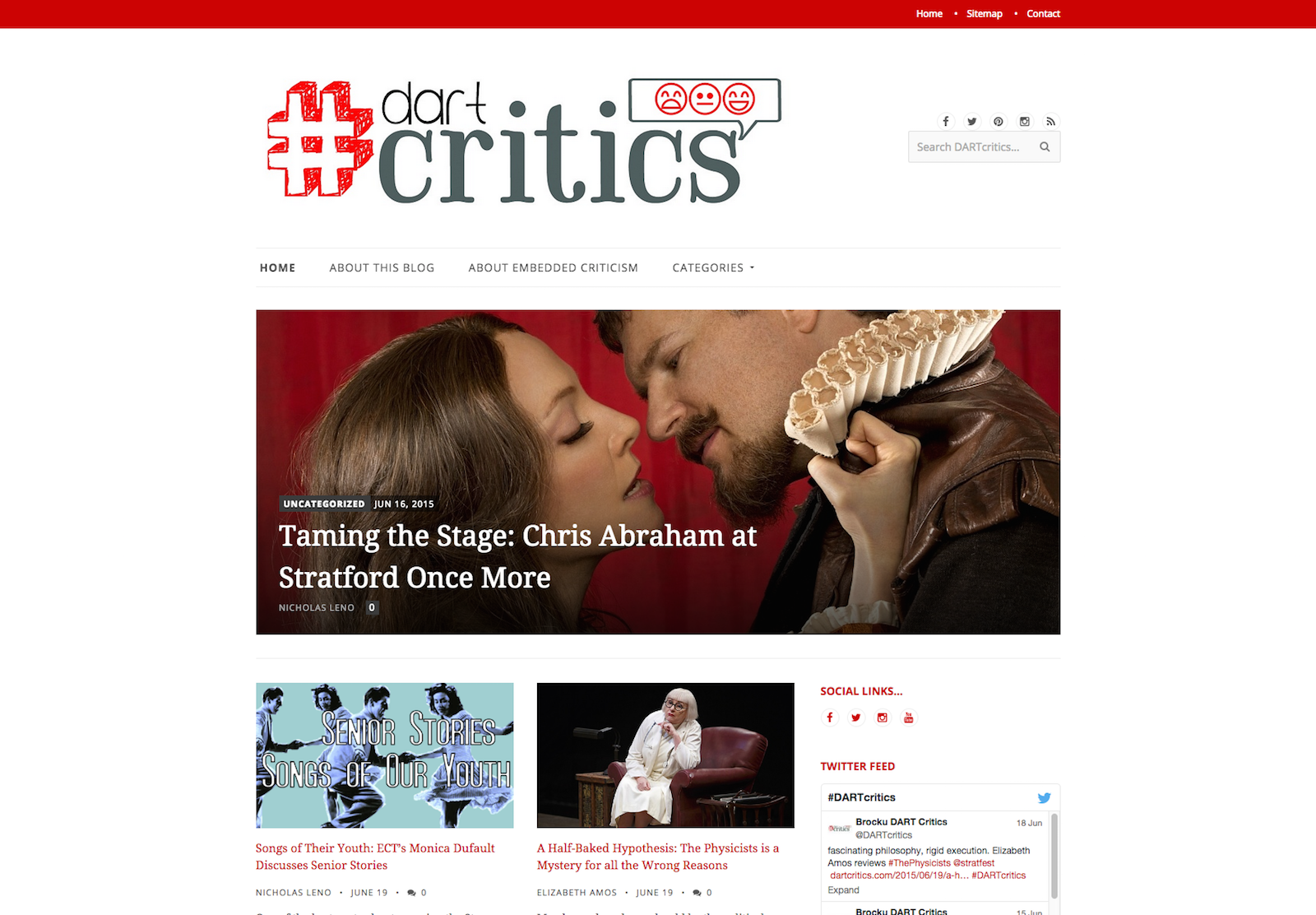 DARTcritics started as a class blog but has grown to fill the void of local arts criticism. DARTcritics started as a class blog but has grown to fill the void of local arts criticism.

They call themselves critics with class.

But more than being clever, the student writers behind the DARTcritics website are providing theatrephiles with thoughtful, arts criticism about performances in Niagara and beyond.

That wasn’t always its purpose, however. The two-year-old theatre review website, which was recently relaunched with a new look, started as a forum for Dramatic Arts Prof. Karen Fricker to post standout assignments by students in her theatre criticism class. But it soon became apparent the site served a larger purpose.

DARTcritics picked up where slashed and shrunken newsrooms left off with their arts coverage. Other than a handful of metro and national dailies, few newsrooms boast a dedicated arts and entertainment reporter anymore, leaving a void to be filled.

“What we discovered was that in some instances, the reviews that we published were among the only, if not the only, review response that productions would receive, because there is so little arts criticism in Niagara,” Fricker said. “This was a startling and empowering realization for the students — that they were in dialogue with art and artists in a privileged way.”

Of course, seeing their names in print was nothing short of thrilling, too. Hayley Malouin was hooked the moment she got her first byline for her review of London Road, a musical about an English town coping with the murders of five of its women.

“I thought ‘OK, we’ll see some shows,'” said Malouin, who signed up for Fricker’s class in her third year. “I wrote the first review and got it up on the blog and was ‘This is like crack.'”

Being published was an incentive, but writing reviews for posting was ultimately a way for Malouin to use what she had learned from Fricker about articulating her opinions of a production beyond saying whether or not she like it.

“I hated (London Road) and finding out why I hated it was so fun,” she explained. “It really changed my view of what happens in theatre. There’s this critical side to it – this analytical side to it…. I think you can be analytical and creative and that’s a really special thing.”

Fricker, a former critic with The Guardian in the U.K., capitalized on the opportunity to turn DARTCritics into a bona fide source of arts criticism last April when Malouin and fellow student Nick Leno landed funding from BUSU to cover St. Catharines’ In the Soil Arts Festival.

She also coached the duo to be editors and social media curators. This summer, they’re running the site like a newsroom with two staff writers, fourth-year DART students Elizabeth Amos and Alex Jackson. Together, they cover theatre in Hamilton, Niagara, Toronto and Stratford, thanks to support from the Match of Minds program run by the Office of Research Services and BUSU.

The relaunch of the DARTcritics site coincides with this summer’s move of Dramatic Arts to the new home of the Marilyn I. Walker School of Fine and Performing Arts in downtown St. Catharines, Fricker noted.

“It’s such an exciting moment for the arts at Brock and in St. Catharines more broadly, with the new First Ontario Performing Arts Centre opening in the autumn, as well as our own building,” she said. “This seemed the perfect occasion for us to take DARTcritics to a new level with a new look, and more reviews.”

Fricker will resume the editor’s post when classes resume in the fall, but for summer, the site is “Nick and Hayley’s baby.”

“It’s a great experience of entrepreneurialism and leadership for them.”

It has also carved out a potential career path for Malouin. Theatre criticism has become something she would like to pursue further, either as a freelance writer or by developing her own theatre review site.

Still, there has been one downside to being a DARTcritic: it’s tough to shut off and watch a show for pleasure.

“I see theatre and can’t not be critical now,” Malouin said. “People see that as a negative but it’s not. I’m always on now when I see a show. I do wish I could go see a Mirvish show and say ‘That’s great!'”