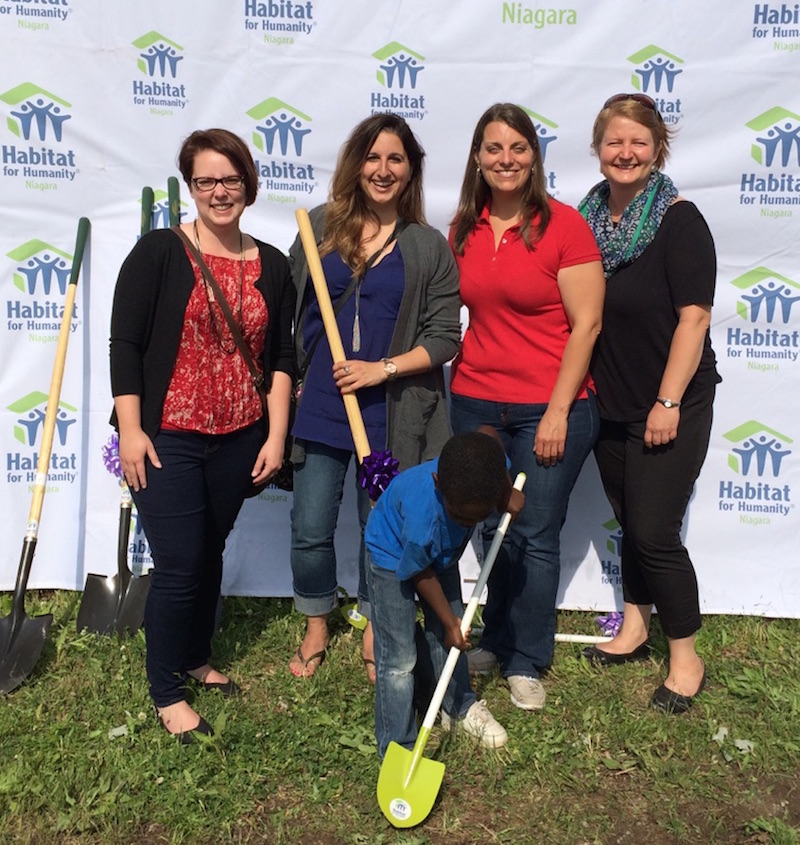 Amber Scholtens, Christina Bosilo, Sandy Howe, Kristen Smith and Ernestson Jean Charles (age 5) his family will move into half of the duplex in October. From left: Brock staff Amber Scholtens, Christina Bosilo, Sandy Howe, and Kristen Smith are part of a team of Brock women staffers who will participate in a Habitat for Humanity house framing blitz Monday in Welland. Ernestson Jean Charles, 5, (front) and his family will move into the house in October.

Hardhat? Kristen Smith and Sandy Howe have that ready, too.

Smith, manager of student and community outreach, and Howe, service learning co-ordinator, will be donning such construction garb Monday when they trade the hallowed halls of Brock to frame hallways – and a kitchen, bedrooms and living room – of new Habitat for Humanity duplex in the works in Welland.

The duo are part of a team of eight women staffers who will pick up power tools and embark on a framing blitz for a unique home build that’s recruiting only women. It’s the first women only build that Habitat for Humanity has hosted in Niagara.

Monique Beauregard, Christina Bosilo, Anna Lathrop, Angela Mott, Amber Scholtens and Amanda Ziegler will also lend their hands to the project. Combined, the team has 21 Habitat for Humanity builds between them but this marks the first local build in which they and a Brock crew have participated.

The crew members, which promote service and experiential learning in the day jobs at Brock, are keen to engage in community work themselves.

The impact goes beyond the gratification of seeing the physical results of a day’s work, however.

There’s also being witness to the joy of the families who get to move into a new house and make it a home when the work is done. Both Smith and Howe have seen the impact of four solid walls to call one’s own during the international builds they’ve joined.

“It really is life-changing for them,” Howe said. “To know this could happen just down the (Highway) 406 is amazing.”

Howe has also been considered family for her efforts on previous builds, being offered the ultimate show of acceptance with invitations to play soccer together or join a family meal.

“It’s the relationships that happen, and the house let’s them facilitate that,” Howe noted.

Both Smith and Howe hope other faculty, staff and students will feel inclined to pick up a hammer and sign up to help with this build, too.

Though spaces are filled for Monday’s framing blitz, assistance is needed for other tasks throughout this build, which will benefit two families.

Barring that, people can always donate money to the Brock University Women Build team members’ efforts. They must raise $2,500 for the cause.

“This is a really good cross-section of students, staff and faculty all working together and representing Brock,” Smith said about Monday’s framing blitz. “Other teams can follow in their footsteps locally and volunteer as well.”

The families will receive keys to their new homes on Monday, Oct. 5 – World Habitat Day.