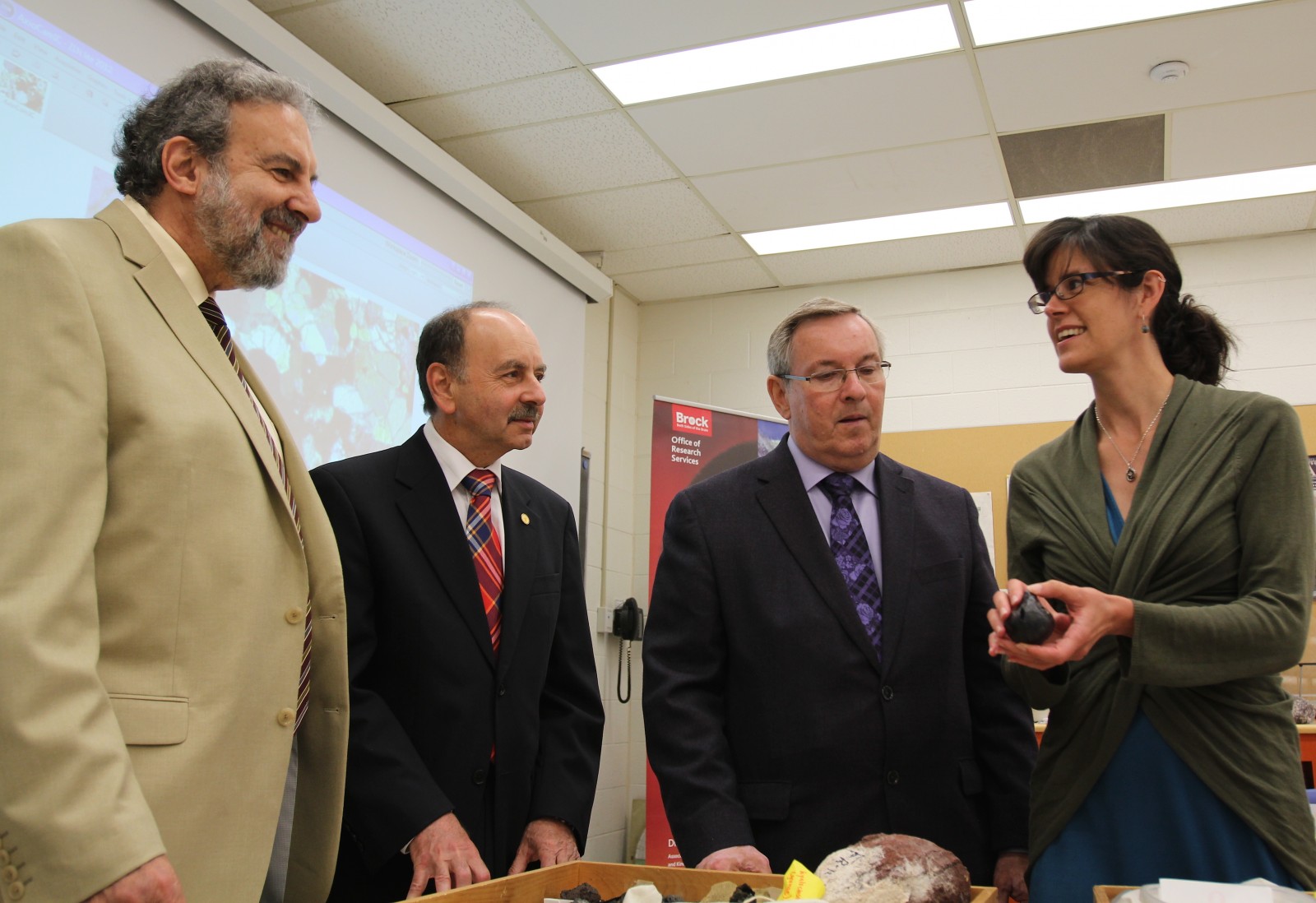 Mariek Schmidt (right) explains the significance of some of the rocks she is studying to (from left) Gary Libben, Vice-President, Research, Brock President Jack Lightstone, and St. Catharines MPP Jim Bradley.

Mariek Schmidt is trying to find the answers to big picture questions.

The volcanologist, who is part of an international team of scientists helping to direct NASA’s Curiosity mission on Mars, wants to unravel the history of our solar system, and determine the history of life within it, too.

Next month, Schmidt leaves for Hawaii with a team of researchers that will analyze lava rocks on two volcanoes there to help figure out whether Mars could have supported life.

But Schmidt, an associate professor in the Department of Earth Sciences, notes the work of her research team and NASA has broader applications here on Earth.

The technology used in NASA missions eventually trickles down to the layperson. Take the digital camera, which was used in previous Mars rover missions but is now technology the rest of us use every day to capture everything from lunch to landmark moments.

Then there are the skills and knowledge that Alicia Thomas, a master’s student working with Schmidt, will gain and use to land her dream job working in Canada’s diamond mining industry.

“There are technologies as well that come out of these big picture missions that have broader application,” Schmidt says.

That relevance was feted Thursday when St. Catharines MPP Jim Bradley visited with Schmidt, who recently received an Early Research Award from the Ministry of Research and Innovation.

Inorganic chemist Theocharis Stamatatos also got funding from the program. In total, Brock will receive $280,000 over five years from the province.

In Schmidt’s case, the money enables her to expand her research team.

The work she and her team do will ultimately improve people’s lives, boost the economy, and help sell Ontario abroad, Bradley said.

He praised Schmidt’s efforts, noting the rigorous process and great competition scientists have to go through to receive an Early Researcher Award.

“It’s not showing up with your hand out asking for money and you get it,” Bradley said.

“We consider these (grants) investments in our future,” he added.