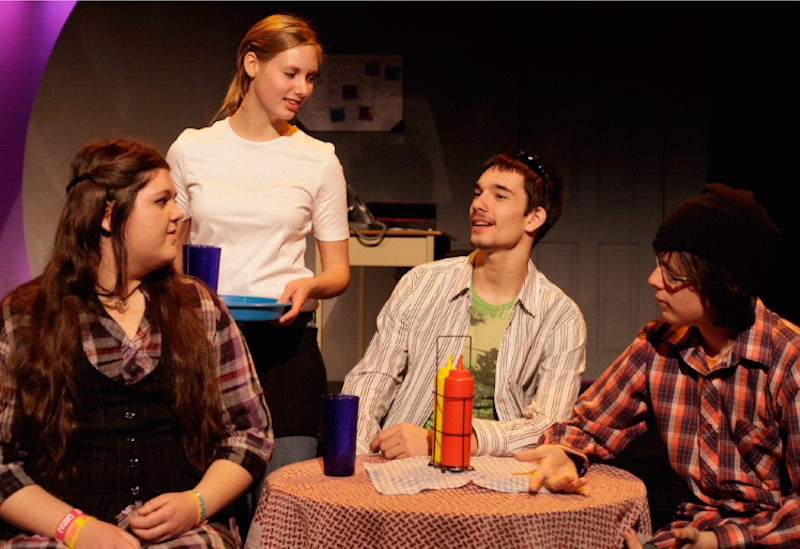 Students at St. Catharines Collegiate perform Dealer's Choice, one of the plays that was part of Commotion.

When young people are given the chance to tell their own stories in their own ways, amazing things can happen.

They produce plays that are both entertaining and informative. They deepen understanding of racism, bullying and other issues with which society grapples.

And they win international awards that affirm their creative ideas and work.

Such is the case with Commotion, a documentary arising out of a project of the same name that Department of Dramatic Arts associate professor Gyllian Raby and Carousel Players artistic director Pablo Felices Luna created three years ago in partnership with community groups.

Commotion captured two Prestige Film Awards for 2015: the Gold Award in the Educational/Instructional category, and the Silver Award for Research.

“You can be justifiably proud of winning a Prestige Film Award,” the organization wrote in an e-mail to Raby. “The judging standards are high and winning means the technique and imagination exhibited by your entry is outstanding and stands above other productions.”

The film documents the work of the Commotion project, in which 80 students at six Niagara high schools produced and performed their original, one-act plays depicting a variety of issues they identified as being concerns to them.

The students created the productions – which explored such themes as the impact of social media on young people, gender relations, death, racism, bullying and Internet danger – using a methodology called “RSVP.”

Raby explains that the process of RSVP – Resource, Score, eValuation and Participation – involves the students deciding collectively upon the theme of their play. Rather than students taking on specific roles – writer, actor, director, etc. – all group members participated in each aspect of the production.

“You bring everyone together to create scores of activities out of which the work grows,” explains Raby. “The whole purpose of this is that it is a wide-open field where people of different opinions and backgrounds and skill levels can come together, share their voices, and create a piece out of their discussion.”

The students presented their dramas to audiences of high school principals, teachers and community members at the Sullivan Mahoney Courthouse Theatre in downtown St. Catharines throughout the three-year program.

Audience members and students discussed the themes following the performance.

“The extraordinary thing to us was that the students are interested in exactly the same topics as adults are,” says Raby. “The level of their sophistication and understanding, once they are given a platform to express themselves, was really awesome.”

At the project’s start, Raby and Felices Luna reached out to TALK (Teams of Adults Listening to Kids) Niagara, an umbrella group of 15 youth-centred organizations that brought community members together to view the performances.

The District School Board of Niagara also gave its support to the project, enabling drama teachers – alongside Raby’s Master students – to offer the 12-week drama program in the six Niagara high schools.

Halfway into the schools’ drama program, audiences consisting of some 60 theatre, mental health, police and other professionals would critique the students’ work, offering feedback on how the students could strengthen their performances.

To raise awareness of the RSVP process, Raby and Felices Luna approached Fourgrounds Media Inc. The St. Catharines-based film production company created Commotion from 240 hours of footage from the six plays over the three-year period.

Fourgrounds president Adrian Thiessen says producing the Commotion documentary was much more that just work for a client but a collaboration in which the company was creatively invested.

“Working on material where peoples’ lives are literally being changed on screen is fun to do, as opposed to selling a product or promoting a message,” says Thiessen. The Commotions project “is enabling people to be creative, taking people who might not otherwise experience some sort of emotional or creative connection at that age, in that period of their lives.”

The federal government’s Social Sciences and Humanities Research Council (SSHRC) provided a grant to support the Commotions project and the award-winning Commotion film.

The Prestige Film Award is a California-based international juried competition that recognizes the work of filmmakers and production companies, with the aim of connecting them to distributors who can sell licensing rights around the world.