Brock set to rally behind ‘Do It For Doczy’ 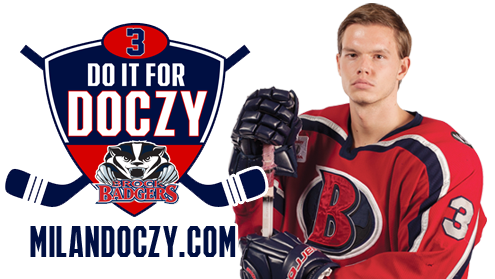 From living the dream of playing hockey in Canada to becoming an advocate for cancer awareness. OHL teams are permitted to ice two import, or European, players per season.

After three years in Owen Sound playing for the Attack, Milan was recruited to play for the Brock Badgers by head coach Murray Nystrom. Milan enrolled in the Business Economics program at the University.

Three years into his stay at Brock, and right before the 2014-15 hockey season started, Milan noticed a mole on his left foot that he hadn’t seen before.

“I went to see a doctor in September and was told that the mole should not be of any further concern, but I thought to myself that I better get it checked out from a specialist,” explained Doczy.

“Shortly after I went to see a specialist and have undergone a first minor surgery where I was told I had melanoma (cancer). All of sudden the entire perspective on what was important in my life changed.”

Milan has since undergone further surgery removing two of his lymph nodes to discover whether the cancer had spread.

“What I learned from being diagnosed with cancer is that everyone’s body is different, and each patient is writing his or her own story. Even though I have been given an 80 per cent chance of the cancer not (spreading), I was told two weeks after the surgery that one of my lymph nodes was cancerous.

Milan continues to battle cancer head on, taking things day by day, and most importantly always looking at the positive.

“Being diagnosed with melanoma is definitely a challenge. I always hope that my next results will be better, and I will hear the words – ‘cancer free’ one day. ”

Since the announcement the Owen Sound Attack community and more recently the Brock Badgers community have rallied around Milan.

The Attack began a “Do it for Doczy” campaign and were gracious enough to work in parallel with Brock University’s efforts.

As a non-Canadian resident Milan’s student health insurance plan does not cover much of what he needs to battle this horrible disease including the aforementioned drug Interferon.

Enter professor Geoffrey Hoover who not only educated Milan in finance courses at Brock, but also decided to set up milandoczy.com

“Milan’s solid character and perseverance in response to the uncertainty and challenges he’s faced since learning of his diagnosis has been impressive,” Hoover said. “You can’t help but want to step up and support a guy like Milan.”

From there, Hoover and University staff decided to plan both a fundraiser and also a cancer awareness game in Milan’s honour.

The “Do It For Doczy” game, presented by Front Row Sports, will take place on Friday Feb. 6 when the Badgers host the University of Toronto Varsity Blues at the Seymour-Hannah Centre in St. Catharines. The puck will drop at 7:15 p.m.

“Our hope is that the wristbands and t-shirts, and February 6th game, will help make Milan’s situation public and steer people who would like to help him to the milan doczy dot com website,” said Nystrom, the Brock head coach.

As expected the hockey community from near and far have rallied around Milan, but none more so than his Brock Badgers teammates.

“We are here to support Milan in any way that we can, but most of all we want the rink to be an escape for him. A place he can forget about his day and know his hockey family is there for him no matter what,” captain Mike McGurk said.

Milan’s message is simple now when it comes to Cancer awareness:

“Constantly monitor your body for changes and never be afraid to get checked out. I believe that the mole had not been on my foot any longer than eight months.

Don’t take anything for granted and live your life to the fullest every day because nobody can say that anyone is guaranteed a cancer-free life.”

The “Do It For Doczy” bracelets and t-shirts are available around campus at Brock University and at all Front Row Sports locations throughout the Niagara region.

For more information on how to donate please visit milandoczy.com