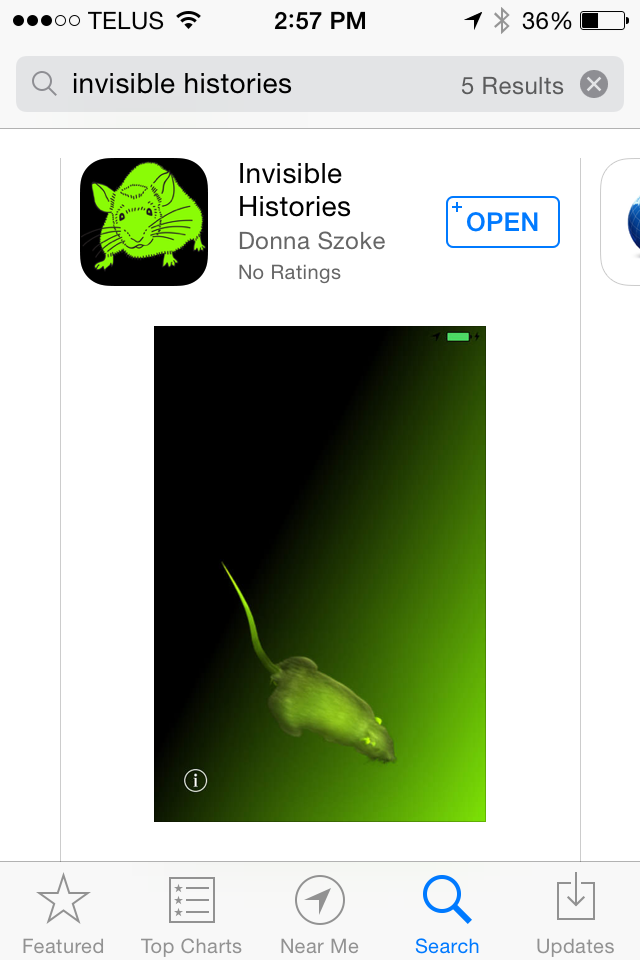 A screen shot of Szoke's app A screen shot of Szoke’s app

On August 6, 1945 at 5:30am, the world as we knew it changed forever. Stories of the devastation caused by atomic bombs dropped on Hiroshima and Nagasaki are ones we know well. The truth behind the secret research and creation of these devastating weapons is also now public record.

What many still do not know is just how close to home lay 270,000 painful reminders of secret atomic testing carried out during the infamous Manhattan Project.

Brock researcher and visual arts professor Donna Szoke has uncovered and exposed this history through her newest project, “Invisible Histories.”

This work followed an extraordinary discovery Szoke made while doing research on the Niagara Region. Just 13 kilometres due east of Niagara-on-the-Lake lay the remains of 270,000 radioactive mice buried at the Niagara Falls Storage Site in Lewiston, New York.

In the years leading up to the atomic bombings, Manhattan Project researchers injected the mice with uranium and plutonium to measure the impact of these substances on the body (https://ejournals.library.ualberta.ca/index.php/pi/article/viewFile/1450/988). Following the experiments, the mice – considered radioactive waste – were shipped to the Lewiston storage site to be contained and buried.

“There’s a radio active waste storage site that no one, especially locally, seems to know about,” says Szoke. “That was kind of my impulse, to make visible what’s invisible.”

Szoke created a geolocative interactive app features 3D, individually animated green glowing mice that scurry across the screen in the direction of the burial site. As users get closer to the Niagara Falls Storage Site more mice begin to occupy the screen with increasing intensity.

Szoke describes this interactivity as “the mice leading the user to their grave,” ultimately exposing evidence of the effects of nuclear testing in the area.

Six years before the Hiroshima and Nagasaki bombs were dropped, U.S. President Franklin D. Roosevelt received a secret letter from the scientific community that would change the course of history.

The letter, signed by Albert Einstein, warned the president of scientific advances made by the Nazis that could lead to the creation of a bomb capable of unthinkable destruction. The fear of foreign atomic weaponry triggered by this letter lead to one of America’s best-kept secrets: The Manhattan Project.

Although the Manhattan Project employed over 120,000 Americans, very few knew the ultimate goal of the research and no one could have imagined the lasting impact these atomic bombs would have on the world. 1945 marked the world’s entry into the nuclear age.

“When we think of that research and this enormous radioactive footprint, I think that’s really stunning,” notes Szoke. “It makes us think about the terrifying power of nuclear war.”

She says that, as a form of new media art, the app aims to have users consider how deep and complex the histories of places can be.

“The mice act as a representation and reminder of the impact of nuclear testing and situates this fearful reality close to home,” says Szoke. “The 270,000 radioactive mice also demonstrate the lasting effects of nuclear warfare.”

As Szoke notes, “there’s something so humbling about a little mouse revealing that to you.”

The app is available for free at the iTunes store.