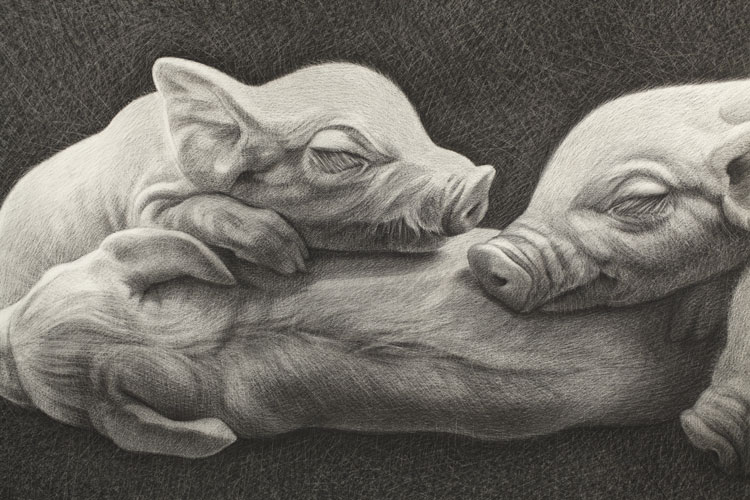 Poil, plume, peau is an exhibition of large drawings by Lorène Bourgeois exploring the hair, feathers, skin, and clothes of humans and animals.

A Brock University visual arts instructor will celebrate her exhibition at the Loop Gallery in Toronto with a closing reception Thursday, Sept. 4 from 6 p.m.-9 p.m.

Poil, plume, peau is an exhibition of large drawings by Lorène Bourgeois exploring the hair, feathers, skin, and clothes of humans and animals.

“Suspend disbelief and imagine yourself a pig. Feel the strength in your stout legs, the coarse hair on your back and under your chin. And when you sleep blissfully among your peers, feel the warmth of their bodies and the cool wetness of their snouts…” Bourgeois says. “Strange as they may be, there are connections between clothing and animals, and between states of dress and nakedness. The garments I observe are inanimate and yet allude to the vulnerability of humans. And animals — a group we define as other, yet also belong to — remind us of the immediacy of life and its fleeting nature. In my work I am hoping to articulate the existential quality inherent to both subjects while celebrating their singularities.”

Bourgeois’s work has been exhibited in Canada as well as in France, Korea, Russia and the U.S. She is represented in numerous collections including the Canada Council Art Bank, MOCCA, Ernst and Young, Senvest, the Banff Centre, the Department of Foreign Affairs and the Donovan Collection.