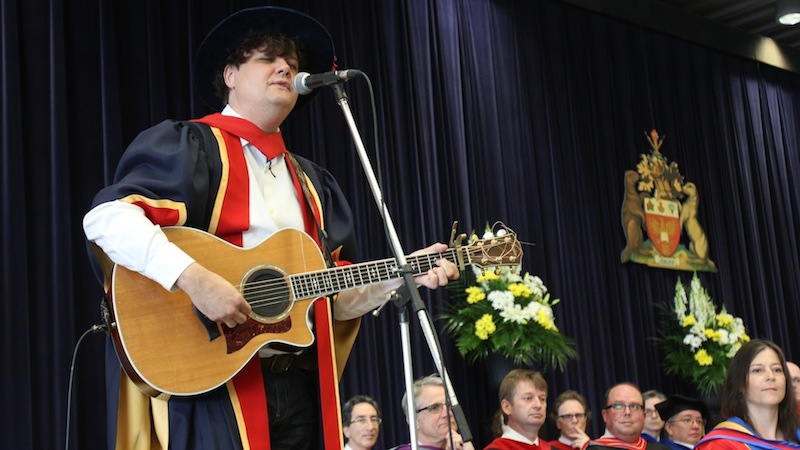 More than 460 students from Brock’s Faculty of Humanities received their degrees and certificates today at the first of nine convocation ceremonies taking place this week at the University.

The crowd of graduates and guests gathered in the Ian. D. Beddis gymnasium was also treated to a couple of songs by Canadian singer-songwriter Ron Sexsmith.

Sexsmith, who hails from St. Catharines, was presented with an honorary degree from Brock. And as part of his address to the graduates, he performed two of his songs – “For a Moment” from the album Cobblestone Runway (2002), and “Galbraith Street” from his 1995 self-titled release.

In her introductory remarks, Debbi Slade, director of the Centre for the Arts, noted: “Ron Sexsmith has never forgotten his roots. He is a true professional both on and off the stage, he has helped to put St. Catharines on the map with his world-class talent and has always worked hard to win our respect.

“To be celebrated by his hometown is a sweet and meaningful reward.”

After receiving his honorary degree and before breaking into song, Sexsmith remarked, “This is an incredible and unexpected honour. I certainly never saw this coming.”

“It’s such a huge honour to be included in today’s ceremony,” he added,” and I just have nothing but admiration for you all for what has taken so much determination, I’m sure, hard work and focus, and probably some money I would imagine.

“It’s remarkable looking out at everyone, it just gives me great hope for the future.”

In his opening remarks for the day, Brock President and Vice-Chancellor Jack Lightstone acknowledged and honoured the ancestors of those on whose traditional lands the University is situated. He then went on to welcome all those in attendance. “This is above all a day of celebration and a day of appreciation of our loved ones and our friends who have seen us through to today’s accomplishments.”

“The Board of Trustees recognizes the commitment, dedication and sacrifice that it takes to become a graduate of Brock University,” said Robertson. “We take great pride in your achievements and share with you and your family in the celebration of your success.”

At today’s ceremony, Professor Barbara Seeber, Department of English Language and Literature, Faculty of Humanities, was presented with the 2014 Faculty Award for Excellence in Teaching.