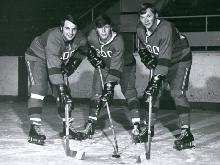 Each represents an historic goal while playing for Team Canada. Each brought a nation together. Each showed just how deeply hockey is ingrained in Canadian culture. It’s why Brock’s Spring/Summer curriculum includes Analysis of the Sport Industry: Canadian Hockey (SPMA 3P90), in the Applied Health Sciences‘ Sport Management department.

“It gives a good snapshot of how something that we kind of appreciate as an everyday part of our life has also shaped the culture of who we are,” said course instructor Jordan Charron. “It’s interesting to see how hockey has gone about and been (refined) throughout our history. We know it’s always been there, but it’s kind of been taken for granted that is has always been there. It’s interesting to see how, as we developed as a nation, hockey has been there side by side the whole way, and it’s developed as a game and changed as a game. It’s even changed as technology has changed and as we’ve changed as society. It’s changed to grow with us. I think it’s good to gain a perspective of who we are as people.”

The course, which begins May 5, starts with a look at Canadian hockey history, both amateur and professional, taking snapshots of each decade.

“We forget a lot happened before 1995 and before we started watching as kids,” Charron said. “A lot of things came before and went into the game.”

There are many cultural components to the analysis of Canadian hockey, such as studying what the sport means to the various diverse ethnicities in Canada, and how Canadian hockey has had an international impact. Current issues — safety, business, marketing and legal aspects — and the growth of women’s hockey, among other topics, are also discussed.

“It’s actually a good course (to take) if you aren’t a hockey nut,” Charron said. “If you are a hockey nut it’s almost harder to take because it’s reshaping those pre-assumptions you have about the sport, and learn a lot more about things you never knew about how the game developed and evolved over time. You go in with a lot of perceptions that aren’t necessarily true.
“It’s something everybody is attached to and can relate to.”

The in-class course runs Tuesdays and Thursdays until June 13 from 5 p.m.-8 p.m. Registration is now open for Spring/Summer courses at Brock, and demand continues to grow as the University expands its offerings for both students and community members who wish to begin, continue or extend their education.
Last year, Brock noted a 17 per cent increase in Spring/Summer enrollments from the year previous. Another 15 per cent increase is expected in 2014.

One comment on “Hockey course offers snapshot of Canadian culture”