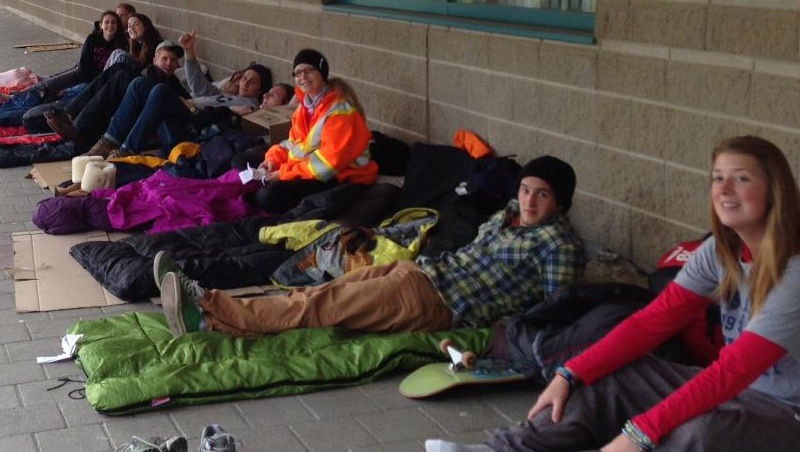 For the Brock students taking part in next week's 5 Days for the Homeless fundraiser, there has never been a better winter to raise awareness and funds for the homeless.

In the last two and a half months, Niagara has had six cold weather alerts that have spanned a total of 28 days.

For most Niagara residents, it has been a winter to keep warm by staying inside.

For the Brock students taking part in next week’s 5 Days for the Homeless fundraiser, there has never been a better winter to raise awareness and funds for the homeless.

From 5 p.m. on Sunday, March 9, to 5 p.m. on Friday, March 14, Brock students will spend five days and nights living and sleeping outside.

The goal of the 15 students is to raise money and food for Community Care/Housing Help of St. Catharines and Thorold.

The 5 Days for the Homeless initiative is part of a nationwide initiative, and students from across Canada take part in the annual fundraiser.

During the five days they spend outside, students will have only a pillow and a sleeping bag and will have no food except the perishable food that is donated to them.

While the students will be living and sleeping outside, they will be required to attend classes.

Goodman School of Business student Ben Zavitz will be participating in 5 Days for the Homeless for the third time.

The cold weather serves as his motivation for taking part in the fundraiser each year.

“The colder it gets, the more motivated I get,” he says. “On average, Community Care helps 1,850 households per month. Of those households, 40 to 50 per cent have children in them. For me, this number is staggering. While it is not the most comfortable five days a year, it is still only five days a year.”

The 15 students taking part in this year’s fundraiser will be joined outside for one night by Goodman School of Business Dean Don Cyr, who hopes his presence will inspire his colleagues to support the cause.

He and Goodman student Katey Gatta will also be busking outside Taro Hall on Thursday, March 13 between 4 p.m. and 5 p.m.

Cyr is also asking for more than just spare change from his colleagues at Brock. He is challenging each of his fellow deans and senior administrators at the University to join him on March 13 to spend the night outside or support the cause with a $200 donation.

“Over the last five years Brock students have shown incredible leadership and dedication to raising awareness and funds,” says Cyr. “This isn’t an easy fundraiser. It’s a realistic portrait of how difficult life is for our community’s most needy.”

Betty-Lou Souter of Community Care/Housing Help of St. Catharines and Thorold knows first-hand the struggles of the homeless and the near-homeless.

Brock’s Goodman School of Business Students’ Association has been co-ordinating the University’s involvement in 5 Days for the Homeless since 2008.

From March 9-14, donations of non-perishable food and money will be accepted outside Taro Hall at Brock.

A benefit concert for the 5-day fundraiser is also happening Monday, March 10 at 7 p.m. at Isaac’s Bar and Grill.

Tickets are $5 or the donation of five non-perishable food items.

Donations for 5 Days for the Homeless can be made online.