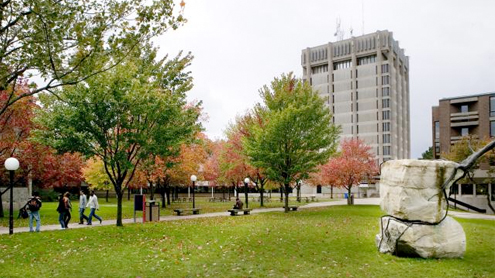 Brock’s Interactive Arts and Sciences Program in the Center for Digital Humanities has been invited to be part of an elite group of university programs that are using technology in innovative ways.

It’s one of six programs – and the only Canadian one – to join the Praxis Network, a new partnership of innovative graduate and undergraduate humanities teaching programs using computers in groundbreaking ways.

Brock joins the University of Virginia, University College London, Michigan State University, City University of New York, Duke University and Hope College in the prestigious collective, whose programs will serve as models for other universities.

“Each of these programs is recognized as a leader in rethinking pedagogy and building collaborative partnerships,” said Kevin Kee, Associate Vice-President of Research and former chair of the Centre for Digital Humanities. “The use of computers in humanities education is growing by leaps and bounds, and the Praxis Network features several standouts that other universities can emulate as they build their own programs.”

The University’s program is also only one of two undergraduate programs included. All programs that are part of the network emphasize the importance of preparing students to become outstanding scholars, while simultaneously equipping them to excel in humanities roles outside of becoming professors.

Brock’s invitation to join the network is telling, Kee said.

“It serves as evidence of the ambition and success of the program, its faculty, students and partners,” he said. “We have been identified as an exemplar program, in large part because of our commitment to collaborative relationships across and beyond the university.”

One such partnership that comes to mind, Kee noted, is with nGen, a centre for developing interactive digital media projects and businesses in Niagara.