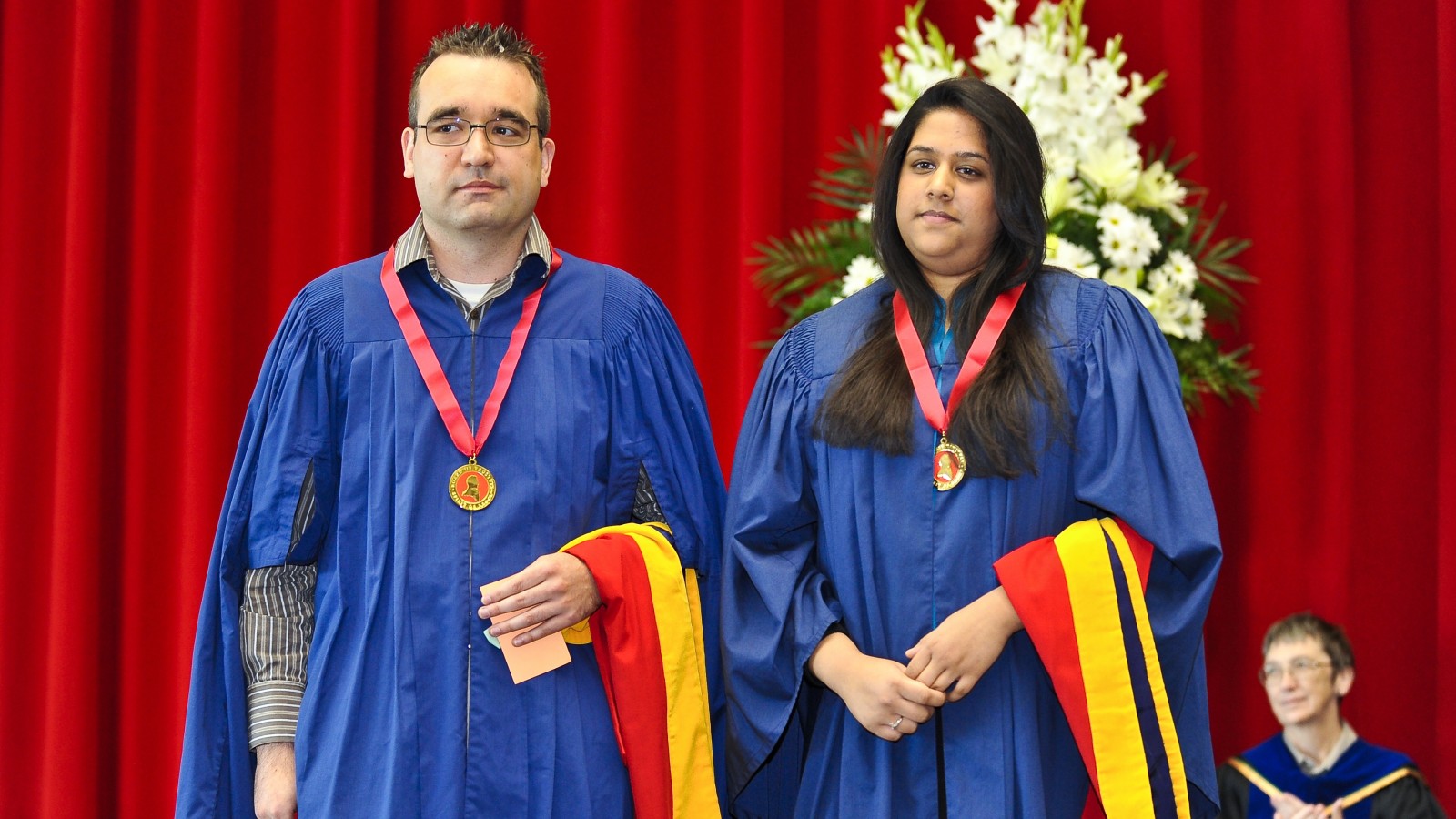 As this year’s winner of the Spirit of Brock award presented at Fall Convocation, Neil Marshall meets the criteria head-on.

It takes guts, drive, and sheer willpower to live with a condition as potentially debilitating as paranoia-schizophrenia and perform as brilliantly as Marshall does.

But it also takes a team committed to bringing out the best in Marshall – and all students.

“I am scared sometimes of the unknown,” she says. “But for him, that fear is emphasized. The unknown is a stress he maybe feels 20 times more than us.”

As a result, she says, Marshall needs to be told well in advance about what to expect at an event that is new to him. Buteau recalls how she prepped Marshall on every detail of national and international conferences that she and Marshall attended: who would be at the breakfast; how the sessions would be structured; how their paper presentation and follow-up questions would proceed; where and when coffee breaks would occur; how they would get to and from the event.

“Everything has to be consistent and clear,” agrees associate professor of mathematics Bill Ralph, one of Marshall’s teachers.

“If I’m setting up something formal that he’s going to do, like a test or presentation or anything like that, I make sure he knows exactly what’s going to happen and I never change my mind,” he says.

Ralph emphasizes that Marshall is imaginative, creative, and well able to cope in his environment, as long as he knows what the “boundaries” of an experience are.

“He tells me, for example, that every morning he has to go through a whole routine to get himself prepared mentally for the day,” says Ralph. “Stresses are different for him.”

To mitigate some of that stress at exam time, the Student Development Centre arranged for Marshall to write exams in a separate room.

People living with paranoia-schizophrenia sometimes feel overwhelmed, especially if they didn’t get enough sleep or have low energy.

Buteau devised what she calls an “emergency exit” where she tells Marshall that she’s available to take over a presentation or teaching session if it becomes too stressful.

“It’s this thing of providing him with an emergency exit and he knows he can take it, but he never had to take it,” she says. “I think it [knowing that he has this option] is crucial for his success. He needs that because his medication doesn’t make the illness disappear – it just allows Neil be able to control the illness for that day. It requires lots of energy to function throughout the day.”

Both she and Ralph say providing a clear and consistent structure is about the only concession they’ve had to make.

“I didn’t have to modify my tests in any way,” says Ralph. “He never needed extra time on a test or an exam. He never needed any special compensation in any way, shape, or form – not one time. He did everything that everybody else did, he just did it a lot better.”

Buteau says many of their colleagues were unaware that Marshall was living with paranoia-schizophrenia.

Ralph says the experience has made Marshall highly empathetic.

“The illness has given a perspective on life that I think most of us never have,” says Ralph. “He doesn’t take his life for granted. He doesn’t take mental health for granted. Being alive and being able to function in the world is a really big deal for Neil, one that he’s patiently worked on for years.”