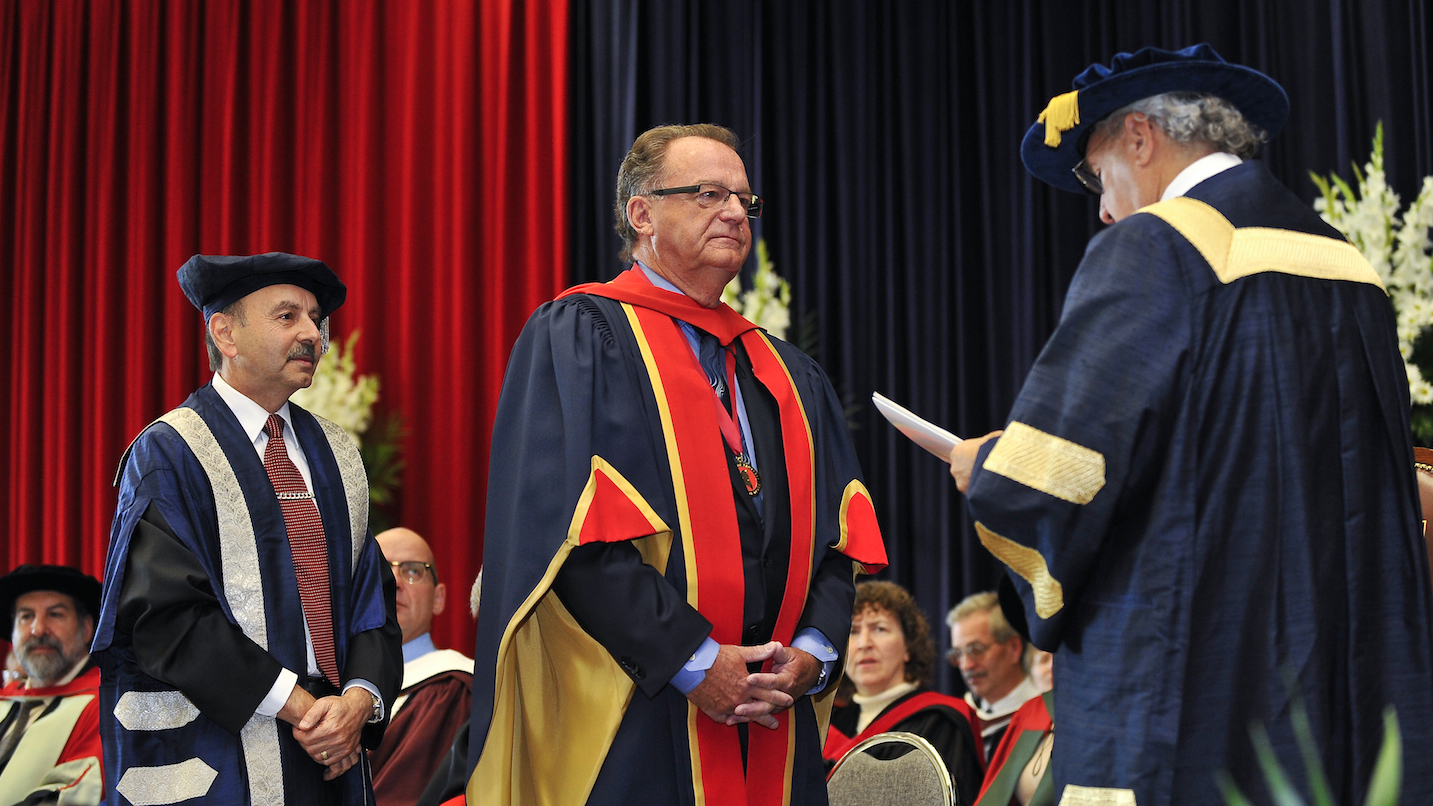 On Saturday, Oct. 13, more than 800 Brock students received their degrees at Fall Convocation.

During the day’s two ceremonies, Chancellor Ned Goodman spoke to students and delivered a message of confidence and leadership.

“I learned in life, that there are some rules that are worth breaking a little bit,” said Goodman.

“Unfortunately, today the most scarce of all ideas is confidence,” he said. “Everybody in the world of business, financial investing, even university professors, are lacking in confidence of where the future is going to be. But we’re all fortunate to live in this country, this country Canada … the best country in the world.”

“So to be a contrarian and go forth with the education and the confidence that you have gained from Brock, be prepared to do it,” he told graduates. “And remember contrarianism works and the odd rule can be broken.”

In his addresses to students, President Jack Lightstone spoke about the historical connections of the day’s celebrations.

“Today is October 13, 2012,” said Lightstone. “On October 13, 1812, exactly 200 years ago, Major General Sir Isaac Brock lost his life leading his troops in a charge up Queenston Heights in order to repel an American invasion.”

“Because of that battle, which sadly ended in the loss of Sir Isaac’s life, but in victory for the Canadian militia, the British Regulars and the First Nations allies that fought side-by-side to defend this territory, Canada became a possibility, actually more than a possibility, a probability,” he said. “We are indebted to those who fought and died in Niagara and elsewhere along the frontier, and to the namesake of our University — Major General Sir Isaac Brock — and his personal sacrifice on this date exactly 200 years ago.”

“No other set of graduates than you today and those graduating this afternoon can say that they graduated on the 200th anniversary of the death of the namesake of our University.”

At Saturday’s 10 a.m. ceremony, an honorary degree was presented to Niagara businessman and community leader David S. Howes for his commendable community leadership and commitment to Brock University, its students and its history.

In his convocation address, Howes spoke to the graduating class about the journey of life and shared some life lessons from his own journey.

“I sincerely hope that you are as excited as I am at becoming a Brock alumni,” Howes said to the graduating class in his Convocation address.

“It is true that our life journeys brought us to this day by different routes and circumstances,” he said. “Your journey, like mine, has been influenced by the knowledge acquired from others and their willingness to pass it on to us. Parents, teachers, professors, TAs and others have mentored us and helped us along our journeys so we can be here today.”

“What we all have in common is our life journey, and our desire to make it as full and rich and joyful as possible. A journey, which is similar to a railway track, it will have its ups and its down, its switches and sidings, stops along the way, and unforeseen disruptions, all of which will influence our life’s journey.”

At the morning ceremony, Professor Tim O’Connell, Recreation and Leisure Studies, was presented with the Brock University Award for Distinguished Teaching. The award recognizes a faculty member who has made a significant commitment to providing and developing quality learning experiences for students, in addition to making valuable contributions in curriculum development and the mentoring of colleagues.

The morning also saw two Governor General’s Silver Medals, which are awarded to the students who achieve the highest academic standing at the undergraduate level, presented to Jessee Larone and Andrew Manuel Medeiros.

At the 2 p.m. ceremony, Professor Diane Dupont from the Department of Economics was presented with the Brock University Award for Distinguished Research and Creative Activity. This award recognizes faculty members who demonstrate outstanding research achievements, contributions toward the training of future researchers, and consistency in scholarly or creative performance. Dupont also delivered the afternoon’s Convocation address to students.