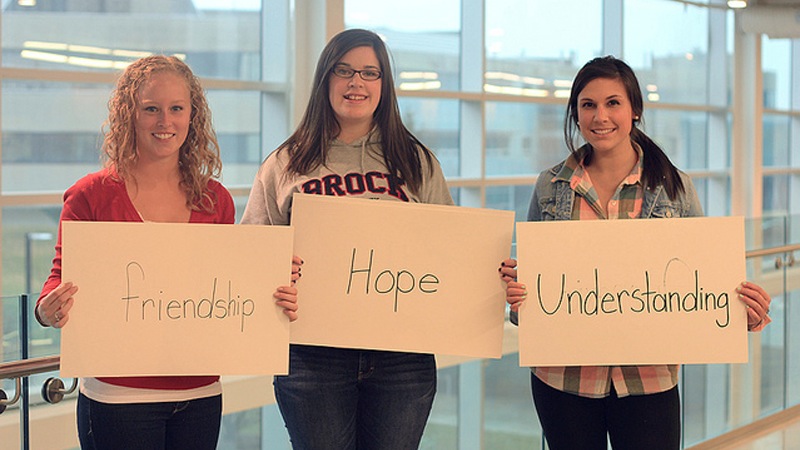 Students in the Faculty of Education took part in an anti-bullying campaign after a student noticed educators were virtually absent from such campaigns. Students in the Faculty of Education took part in an anti-bullying campaign after a student noticed educators were virtually absent from such campaigns.

Last winter break while doing research for a paper, Megan Peach discovered that while there were plenty of students and public figures in anti-bullying videos, teachers were noticeably absent. Peach saw that as an opportunity to craft a strategy that would change how bullying is approached, particularly by educators.

“I came across some shocking statistics of recent teen and child suicides in Ontario and was really taken back,” Peach said. “I started watching anti-bullying YouTube videos posted by students, celebrities and politicians, but not a single video showcased an educator.”

The absence of educators in front of the camera was the snowflake that caused Peach’s findings to snowball into action and planning.

When she returned to campus in January, Peach shared her findings with her classmates and together, they began to devise ways to bring educators to the forefront in preventing bullying.

“I wrote an original script and as more people got involved, we added lines and new ideas,” she said. “We made announcements in our classes and received an overwhelming amount of support and involvement from students and professors.”

The result was a written pledge – an affirmation to stand up to bullying – complemented by a video that challenges the viewer to eliminate stereotypes and victimization.

The four-minute video depicts Brock students holding up signs that show reasons they were bullied while growing up.

Words, such as braces, fat, loner, teacher’s pet and ugly, are prominent in the early stages of the video but replaced by positive messages, such as equity, empathy, respect, understanding and hope, as each student pledges to eradicate bullying.

“It was very empowering to witness so many students get involved and take time out of their busy lives to share their bullying experiences and take action as future teachers,” Peach said.

And while the education students have taken the anti-bullying pledge, so, too, have teachers and students in schools throughout the province.

Peach credited two people in particular with making the project such a success.

Bryce Honsinger, a professor who opened up his classroom for feedback and filming, was a “huge help and motivator” while fellow student Liam Dinsmore worked behind the camera and in the editing suite.

“The project would not have been possible without their help and support,” Peach said.