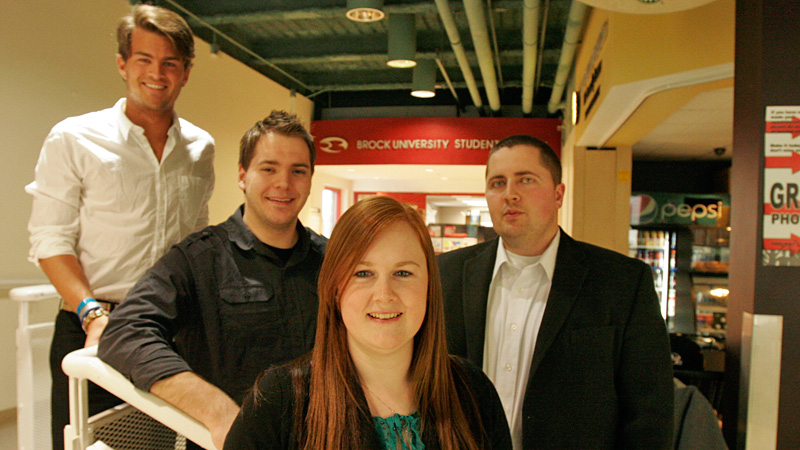 The new students’ building on weather station field doesn’t exist yet, but it’s already at the forefront of the minds of the newly elected Brock University Students’ Union (BUSU) executive.

In a referendum last year, 87 per cent of Brock undergraduate students voted in favour of the building. There’s a chronic lack of around-the-clock, patrolled space for students, Nicholls said.

“We’re one of the only universities in the province that doesn’t have student chill space.”

This year, a Request for Proposals will be issued for a potential architect for the project. BUSU is likely four or five years away from having shovels in the ground, but this year will focus on gathering opinions from students, Speers said.

Students “need a space where they can go and know they’re safe,” said Finn.

The new executive was elected on Thursday, Feb. 16. There were 3,378 student votes cast, representing 19.1 per cent of eligible voters. Students also voted in favour of continuing to fund BrockTV, as well as amending BUSU’s constitution.

Finn ran for office after working around campus, including in the Brock Card office, and hearing about issues students were having. “I wanted to do something about it and help make change,” she said.

Speers ran again because over the last year, “I saw 100 other student unions and some of the incredible things they were doing, and there’s no reason we can’t use some of their ideas and be doing those things too,” he said.

Nicholls has been involved in the Brock University Students’ Advisory Council (BUSAC), and “this seemed like the next natural step.”

Millard wants to build on the success of Isaac’s Army and improve school spirit around Brock. He wants to see more campus enthusiasm for the arts in light of the new Marilyn I. Walker School of Fine and Performing Arts project downtown, and he wants to integrate Isaac’s Army with athletics and more student clubs. He also wants to get more community sponsorships for school spirit events.

Finn wants to increase awareness of what BUSU can do for students, while Nicholls wants to work with local municipalities and encourage them to crack down on landlords of derelict student buildings. Speers citesrenegotiating student transit agreements as a priority, and also wants to increase use of the UPass, the student health and dental plan and emergencysupport for students, since he knows the need is out there.

“These programs are here for students who need them,” he said. “The finance and administration portfolio is one that people feel in their wallets.”