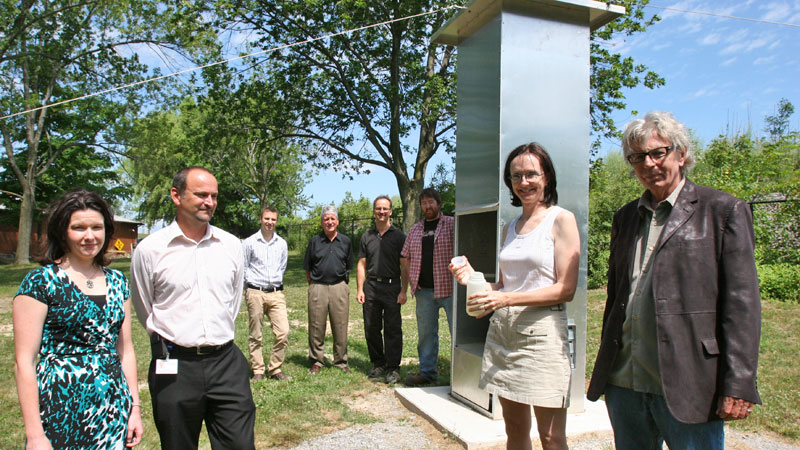 Climate change means insects will migrate, bringing new diseases with them. And Brock University and Niagara Region Public Health are at the forefront of monitoring that in Canada.

The two organizations have partnered to erect the Rothamsted Trap, a slender 40-foot-high contraption at the Decew Falls Water Treatment Plant in Thorold. The trap essentially acts as a bug vacuum, drawing in about 300 insects each day. The results are analyzed by researchers in Brock’s Biological Sciences department. For the next 20 years, researchers will analyze the insects, along with climate data, to determine which insects are migrating from the U.S. and what diseases could be coming with them. It will also help predict future trends.

The health department will share the data with the Ontario Ministry of Health and Long-Term Care, which will use it to help formulate future provincial vector-borne disease strategies. The information will also be shared with local family physicians and hospitals, said Bill Hunter, Niagara Region Public Health’s manager of Environmental Health.

“If someone is presenting certain symptoms, they’ll know that these previously unseen illnesses are possible,” he said. “All indications show that we’ll see a significant increase in vector-borne diseases as a result of climate change.”

Fiona Hunter, professor of Biological Sciences, is leading the insect analysis at Brock. Hunter is a renowned medical entomologist and a leader in West Nile mosquito surveillance.

Blue tongue virus, which threatens the American livestock industry, is just one example of a vector-borne disease that could be carried here by migrating insects, Hunter said. So far, the virus has made it as far as New Jersey.

“We don’t know what’s coming down the line, but we do know that there are a lot of species in the U.S. that have the potential to move north,” she said. “The possibilities are endless.”

Rick Cheel, Interim Dean of Brock’s Faculty of Mathematics and Science, said the research is important to future public health.

“This research is of immense value because it tells us what’s going to happen,” he said. “This is knowledge for the future.”

The trap is named after Rothamsted Research, a UK agricultural research centre where the traps were first developed. Brock’s Machine Shop designed and built the Niagara trap. Brock has only one of two traps in North America. The other is at Cornell University in New York State.

The trap collects insects from May to October.