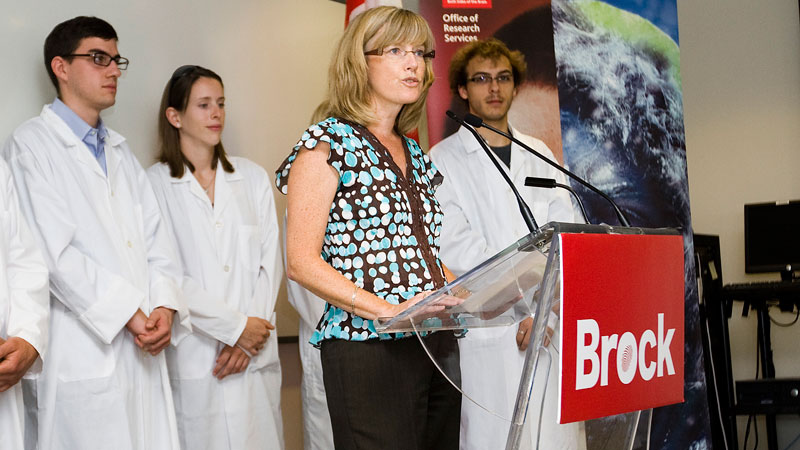 Cathy Mondloch talks about her research during a National Sciences and Engineering Research Council announcement at Brock. Cathy Mondloch talks about her research during a National Sciences and Engineering Research Council announcement at Brock.

Cathy Mondloch spends much of her time trying to figure out how we recognize one another.

The Psychology professor’s research on face perception is reaping intriguing results, and recently attracted national recognition when her lab became the focus of a federal funding announcement.

Mondloch is the recipient of one of 123 Discovery Accelerator Supplements from across Canada, given annually by the National Sciences and Engineering Research Council (NSERC).

Gary Goodyear, Minister of State (Science and Technology), visited Brock’s St. Catharines campus on June 17 to make the announcement, which included more than $411 million awarded to researchers across Canada through several NSERC programs.

Mondloch received a five-year Discovery grant, as well as the three-year Accelerator grant. This will allow her to hire a postdoctoral student with the expertise to run complex 3D and 4D cameras and related computer software used in her investigations in the Infant and Child Development Lab at Brock.

Her research group is interested in how children develop the ability to recognize faces and how this ability is influenced by experience with different types of faces. This knowledge is important in an increasingly mobile and global world, since investigations have shown that peoples’ ability to recognize others decreases for faces from races other than their own.

In 2009, the implications of this inability came to light when Suaad Hagi Mohamud, holder of a Canadian passport, was detained in Kenya on suspicion of identity fraud. Officials held her for three months in Nairobi, claiming she did not look like the person in the passport photo. DNA testing cleared her and she was allowed to return to Canada.

Until recently, laboratory work involved showing participants face images in two-dimensional form, looking straight ahead with a neutral expression. In contrast, faces encountered in the real world move, express various emotions and rotate in space. These are all factors that make it difficult to recognize faces.

The younger participants are recruited through the lab website, as well as through a partnership with local school boards, Mondoloch said. But the lab conducts research participants from ages three to 80.

“We can now challenge our participants with faces as they are experienced in the real world, gaining new insights about how expertise develops during childhood, as well as about limitations in that expertise,” Mondloch said during the national announcement at Brock.

While the advanced technology in her lab allows the researcher to create more realistic face stimuli, the funding from the Accelerator award will allow her to hire a postdoctoral fellow who can run the sophisticated equipment.

She will also be able to build on international collaborations already in place. Just this past spring, Mondloch and her PhD student, Lindsey Short, spent a month in China, photographing 200 adults and children. With the lab equipment and the expert post-doc, they will be able to take the images and systematically manipulate important facial cues, such as skin tone, skin texture, and feature shape.