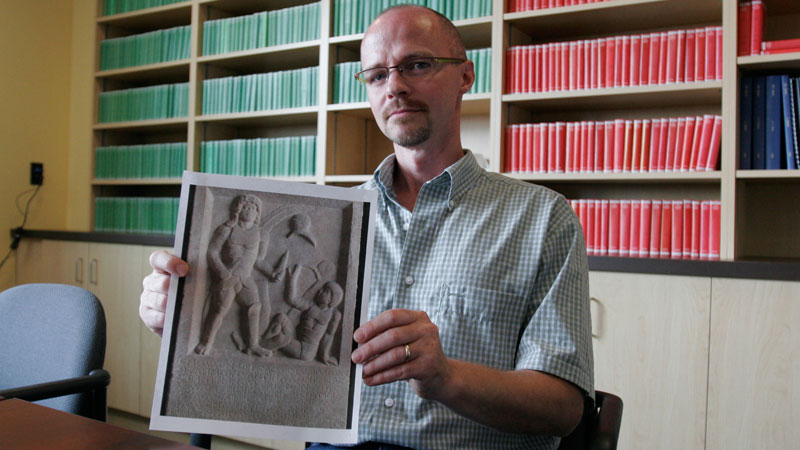 Michael Carter displays a photo of the gladiator tombstone he studied. Michael Carter displays a photo of the gladiator tombstone he studied.

In popular culture, Roman gladiators are a symbol of appalling barbarism – men who fight to a gruesome death as bloodthirsty crowds cheer them on.

But Michael Carter has evidence that we may have it all wrong.

The associate professor in the Department of Classics studies Roman entertainment spectacles, particularly their impact on Greek culture. He has uncovered the latest example that gladiators did not fight to the death. That example comes in the form of a message on an 1,800-year-old tombstone criticizing a referee’s call.

Carter examines many epitaphs as part of his research. The most recent is on a stone found 100 years ago in Turkey, now on display at the Musée du Cinquantenaire in Brussels, Belgium.

The stone marks the death of a gladiator named Diodorus who battled a man named Demetrius. During the match, Demetrius ended up on the ground in a prone position, but Diodorus did not kill him. The referee (or summa rudis) seemed to think Demetrius’ fall was accidental and ruled that the match continue. Demetrius went on to kill Diodorus in the match.

“After breaking my opponent Demetrius I did not kill him immediately,” the epitaph reads. “Fate and the cunning treachery of the summa rudis killed me.”

It all points to the notion that there were rules and referees in gladiator matches, Carter said. Many gladiators fought multiple battles. Some retired quite wealthy. Their epitaphs often show their stage names, the number of battles they fought and the number of people they spared in doing so.

“There is all kinds of evidence to show that they didn’t kill each other just because they had the opportunity.”

The notion changes popular perceptions of ancient Rome, which many see as a possible model for the decline of western civilization, he said.

It shows that the matches weren’t so different from some of the sporting events we have today.

“There’s a whole debate right now about whether UFC is sport or spectacle,” he said. “There has even been a debate around hockey. The mob mentality we saw in Vancouver recently, Romans knew all about that.”

Carter’s paper about the epitaph was published in volume 177 of the journal Zeitschrift für Papyrologie und Epigraphik. He recently presented it at a conference in Halifax.

In the news:
• Gladiator referee chewed out on tombstone — Discovery News
• Gladiator’s tombstone: Blame my death on ref — msnbc.com