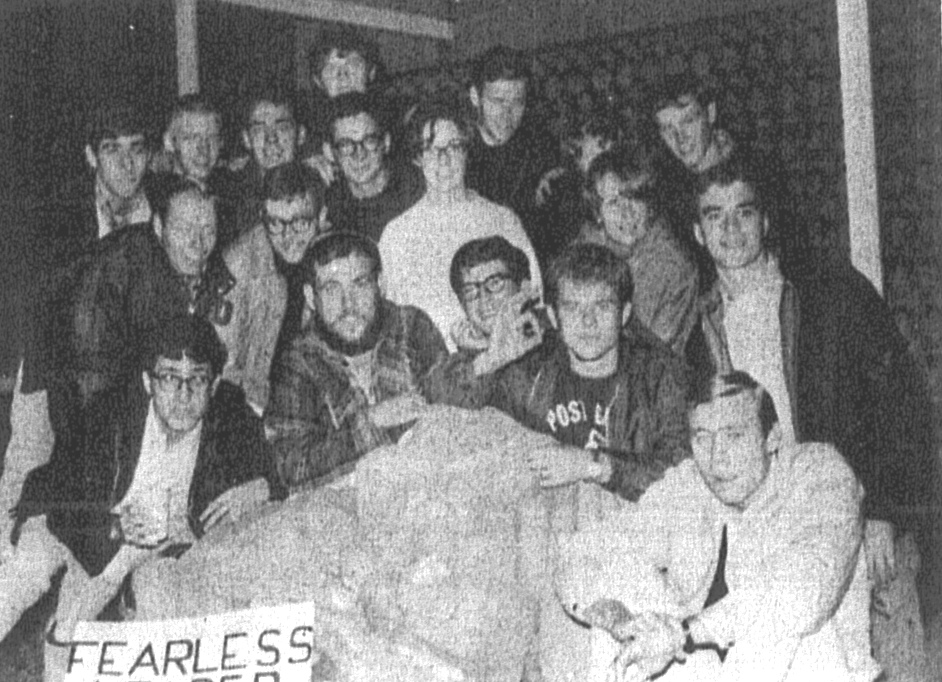 Students who stole a piece of the Brock Monument, Brock University yearbook, 1966-67

It was not his actual shoulder, of course, but a limestone replica from his statue atop the Brock Monument at Queenston Heights — the legend was it had fallen off many years before after being struck by lightning. Some frosh students found it stored at the base of the column, and claimed it for the University.

At the time it was thought that other body parts might follow. As the student newspaper The Badger reported: “The liberators … hope to recover his other shoulder so that we can at least have mates.”

That never happened, but thanks to the initiative of these early students, Brock’s shoulder still resides on the University campus, in a corner of Jubilee Court.

Or so the story goes…

The story of Brock

What really happened? How did a piece of Brock’s Monument end up at Brock University?

After some investigating, we have most of the answers, though there remain some loose ends that need tying up.

The story of our University’s namesake, Maj.-Gen. Sir Isaac Brock, is well known. He was killed by a sniper’s bullet on Oct. 13, 1812 while leading a charge against an American invasion at the Battle of Queenston Heights in the War of 1812. His last pronouncement is said to have been “Surgite!” — Latin for “Push on!” — which is Brock University’s motto.

Exactly 12 years later, on Oct. 13, 1824, thousands of people gathered on Queenston Heights to dedicate a 135-foot monument in his honour. The remains of Brock and his aide-de-camp, Lt.-Col. John Macdonell, were brought from Fort George where they had lain since the battle and were reinterred in a vault below the monument. Legend has it that Macdonell’s body was badly decomposed, while Brock’s was near perfect.

But the deceased were not allowed to rest in peace, for on April 17, 1840, the monument was damaged beyond repair by a terrorist bomber believed to be Irish-Canadian Benjamin Lett. Described as a “vagabond” by none other than Charles Dickens, Lett was in league with William Lyon Mackenzie, leader of the Upper Canada Rebellion of 1837.

Public indignation was fierce, and on July 30, thousands gathered at Queenston Heights to launch the building of a new monument. A design competition was held and architect Thomas Young was declared the winner, but nothing happened for more than a decade. Then at last, in July 1853, what was left of the old monument was torn down, and on Oct. 13 (that date again) the corner stone of the new monument was laid. Brock and Macdonell, who had been moved to a graveyard in Queenston village, were placed in a vault beneath. The scaffolding around Brock’s Monument, 1930

The new monument was not, however, Young’s winning design. Instead, it was an imposing 185-foot Corinthian column topped by a statue of Brock, designed by another architect altogether, William Thomas. On Oct.13 (when else?), 1859 it was officially inaugurated before a crowd again numbering in the thousands.

For more than 70 years, the statue of Brock stood proudly atop its monument on the Niagara Escarpment brow at Queenston Heights. But in 1929 disaster struck. On April 5, a huge thunderstorm lasting almost six hours wreaked havoc throughout Central Ontario, causing extensive damage. Brock’s statue was one of the casualties — its outstretched right arm broke off and came crashing down. Weighing nearly half a tonne, it split into three pieces that were buried deeply in the ground.

The statue may already have been weakened by an earthquake that rattled Niagara Falls a year and a half before, and an inspection of the monument confirmed the worst. The statue was in particularly bad shape, and the 1930 annual report of the Niagara Parks Commission stated: “It is remarkable that the head had remained so long without falling, for the upper part of the torso was completely shattered through the action of the elements.” The weathered torso of Brock’s Monument, 1930

There was no choice but to remove the entire statue from the waist up and lower it to the ground. The torso and both arms were rebuilt from scratch, but the head, according to Ron Dale, former superintendant of Niagara National Historical Sites of Canada, was repaired and put back in position. In addition, the whole monument was repointed to make it more weather-proof.

Students ‘reclaimed’ the torso and shoulder

The fallen arm and the removed pieces were then stored at the base of the monument and promptly ignored, until that Thursday night in 1966 when those enterprising Brock students “reclaimed” the torso and left shoulder (complete with epaulet and chest medal) for the University and placed it on the front lawn. The lawn in question, incidentally, was not the one in front of the Schmon Tower, which was only then under construction, but a patch of grass fronting the former refrigerator factory down the hill where the University spent its early years.

Brock’s president, James A. Gibson, was not pleased, and wasted no time having the stone returned to the Niagara Parks Commission. But in about 1973 it came back again, legally this time, as a tribute to the many individuals, organizations, corporations and unions that helped raise $8.5 million for the University’s Founding Fund. A plaque marking the occasion was mounted on the stone and unveiled by C. Bruce Hill, general chairman of the fund. For several years, the stone sat in what was called Founders’ Court in the Mackenzie Chown complex, but was then transferred to Jubilee Court where it still stands. There are plans to move it permanently indoors this spring. “The weather is having a harsh effect on the stone,” says Lesley Bell (BA ’88, BA ’90), visual resources librarian at Brock University. “Brock will finally be coming out of the cold.”

The destination is expected to be Brock’s new Market Hall, which already displays a dramatic 60-foot mural by Canadian artist Bogdan Luca depicting images from the War of 1812, including one of Isaac Brock mounted on his horse Alfred.

So we know now that the stone in Jubilee Court did not fall in the storm of 1929 but was removed from the monument a year later, and we also know how it finally came to the University. Piece of Brock’s Monument that now resides in Jubilee Court

But questions remain. In particular, the story of what happened in 1966 is still incomplete, and if anyone reading this was involved in that escapade, and is prepared to own up and provide further details we’d love to hear from you. After all, that stone is really, really heavy — how on earth did you get it here?